We hunkered down in Augusta’s Capitol Theater to watch pulse pounding, thundering, throbbing, breathless, breakneck adventures packed with thrills, spills and chills. It was one of many Saturday afternoons of long ago, when we watched the countless movie serials.

Sometimes we were mesmerized by the adventures of Superman, Batman and Robin, The Lone Ranger or perhaps Flash Gordon. The 20-minute episodes always closed with life or death cliffhangers, only to reappear the following week with miraculous escapes. Sometimes, the movie makers would conveniently invent a different ending to enable the hero or heroine to escape from certain death. I always remember the time that Jackie Cooper played Donn Fendler in the serial and fell off a three-story roof. When the serial picked up again the following week, he managed to land in a rain barrel full of water. Donn Fendler was the real life boy scout in the book about him: Lost On A Mountain In Maine. 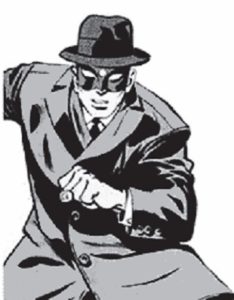 It was an inspirational book for boy scouts everywhere, but the movie serial was really a stretch.

A lot of the serials originated as comic strips, enhanced by special effects and original sounds. I always liked the Green Hornet and Cato who would tear through the night in the Black Beauty super car as The Flight Of The Bumble Bee music buzzed in the background. Who can ever forget the mysterious masked hero of the plains with his faithful Indian companion, Tonto. I can hear the bugle ringing out even now to introduce The William Tell Overture as The Lone Ranger Rides Again. Robert Livingston and Chief Thundercloud were the originals, and then Clayton Moore and Jay Silverheels appeared in the feature films when we all “returned to the golden days of yesteryear.” 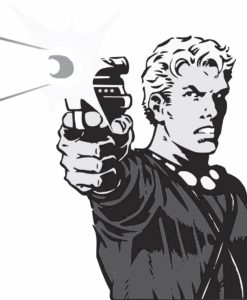 Flash Gordon was a fixture of the movie serials. He was played by Buster Crabbe, and Jean Rollins was his sexy blonde heroine-girl friend, Dale Arden. One of the villains was Mingo The Mercilous, ruler of the planet, Mongo. Flash Gordon conquered the universe and took a trip to Mars. It was the most expensive serial ever made, something in excess of $350,000. I remember it being portrayed in green and white instead of black and white. Incredibly, the futuristic rocket ships and equipment were ahead of their time and materialized as the actual space travel of today.

One of my all-time favorite serials had to do with a guy in a tight fitting costume who could leap tall buildings in a single bound, was more powerful than locomotive and was faster than a speeding bullet. Clark Kent was a likeable wimp. Lois Lane was stuck on the Man of Steel. They were both reporters for the Daily Planet. If it weren’t for that darn kryptonite, Superman would have been invinceable.

Then of course, there was Bruce Wayne and Dick Grayson, the dynamic duo who rode around in the Bat Mobile as Batman and Robin. I never really understood how the police chief was able to send the Bat Signal into the sky in broad daylight . Strange! 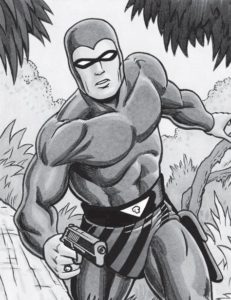   The Phantom was another fugitive from the comic books. He wore a purple and black uniform with a skinny black mask. I sent away for a Phantom ring with skull and crossbones. I also sent away for a full- blown King of the Mounted Police uniform and a magic decoder ring.

I remember Captain Marvel as being a little bit chubby with an ill-fitting costume, but I liked the lightning bolt on his chest and the way he exclaimed “Shazam.” Captain Marvel Junior was another favorite hero, who changed from a handicapped newspaper boy to super hero by simply saying: “Captain Marvel.” 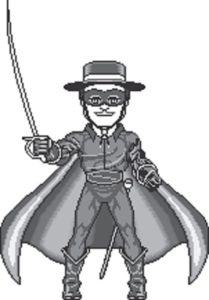 “Years ago in the Orient, Lamont Cranston learned a strange and mysterious secret, the ability to cloud men’s minds so they could not see him”. That’s when he became “The Shadow,” and philosophized: ”The weed of crime bares bitter fruit. Crime does not pay. The Shadow knows.” Then we would hear his sinister, nasal-like laughter. How much fun was that!

Blondie and Dagwood were technically a series of 28 films with Arthur Lake and Penny Singleton, but they also qualified as feature films. Unlike the cliffhangers described before, they were just a lot of fun with the bumbling Dagwood character and their kids, Baby Dumpling and Alexander. Dagwood was always getting into trouble with his boss, Mr. Dithers. I loved those flicks.

By the 1940s and early 1950s, serials were so numerous with so many boring and stale plots, they totally lost their popularity. There was a brief revival of serials in the late ‘50s and ‘60s, but, but alas, they were never quite the same again, but they were certainly great while they lasted.

Milt Huntington is the author of “A Lifetime of Laughter’ and ‘Things That Make You Grin.”