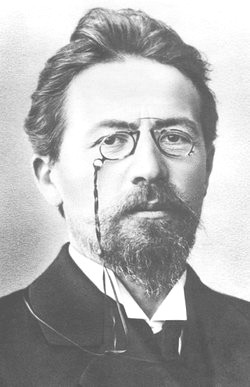 Russian writer Anton Chekhov (1860-1904) conveyed an astute sense of reality in his short stories and plays , and did so with extraordinary literary artistry, powerful compassion for human beings and ruthless attention to detail. The Cherry Orchard was the last of four major plays to be completed, just six months before his death from tuberculosis.

The play deals with a family of aristocrats who have squandered their vast wealth and are forced to sell their lands, which include a huge and intermittently profitable cherry orchard, their main source of income. They are surrounded by servants and friends who mean well but the bottom line is they are all spending way too much time spinning their wheels.

What compelled me to read this play was Chekhov’s ability to see right through them in every comment and gesture as they interact with each other. He catches their blundering comments, sighs, scheming, despairs, and self-justifications but achieves this in a way through which we recognize ourselves and others and grow to care about them.

These nice folks include Lyubov, the matriarch landowner who gives into every freeloader approaching her for money; her 17 year old daughter Anya who’s under intense pressure to marry and lives in her own wishful dream world; the governess Charlotta seeking a man for decent conversation; Epikhodov, a bungling, disastor-prone clerk etcs.

Lopakhin is a wealthy merchant who wants to buy the estate and turn a profit in real estate development. Formerly a peasant whose father was a serf on the estate, he is now part of the new upper social class. But he wants to help Lyubov’s family too.

His monologue during the opening scene, as he awaits Lyubov’s arrival back from five years in Paris, reveals much about hi own character and gives a taste of why the play has appealed to millions of readers and theatergoers in its infinite number of productions in all languages since its first production in January, 1904:

“Lyubov Andreyevna has been living abroad now for five years and I don’t know how she may have changed. She’s a good soul, a simple, easy-going woman. I remember when I was a young sprout, fifteen years old, my father — he’s dead now, but he used to have a little shop in the village then — struck me in the face with his fist one day, and my nose began to bleed. We’d gone out of doors together for some reason or other and he was drunk. I remember just as though it were now, how Lyubov Andreyevna — she was still a slim young thing — here in this very room, the nursery. ‘Come, come, don’t cry your eyes away; you’ll live to dance on your wedding day, little peasant,’ says she. Little peasant! …True, my father was a peasant, and here I am wearing a white waistcoat and yellow shoes. From the sow’s ear to the silk purse… I’ve grown rich, made a lot of money, but when you come to think of it, to figure it out, I’m still a peasant.”