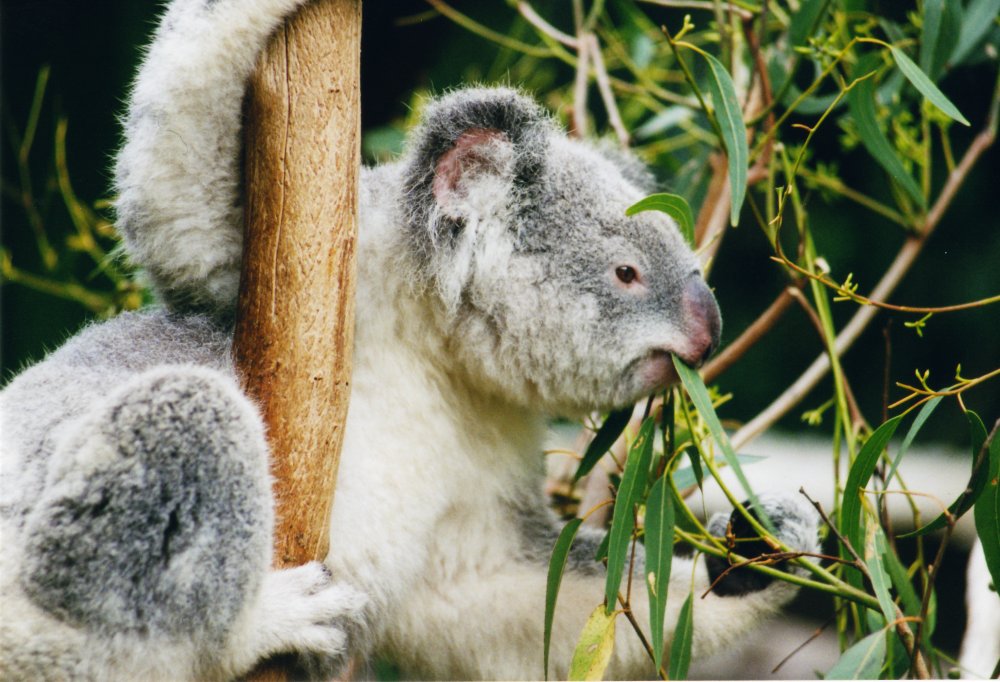 The bush fires in Australia have been in the news lately, and the affects of those blazes on the wildlife there have been devastating.

The blazes, which have been burning across Australia for months, have razed homes and wiped out entire towns. Across Australia, nearly 18 million acres of land have been burned – much of it bushland, forests and national parks, home to the country’s unique wildlife.

Nearly half a billion animals have been impacted by the fires in New South Wales (NSW) alone, with millions potentially dead, according to ecologists at the University of Sydney. That figure includes birds, reptiles, and mammals. The total number of animals affected nationwide could be as high as a billion, according to Christopher Dickman, the University of Sydney ecologist who led the report.

Fires are nothing new in Australia, but they have been growing more intense and becoming more destructive in recent years, a problem that has been exacerbated by climate change. And animals have been the most affected.

Some animals, like koalas and kangaroos, are primarily killed directly by the fires – for instance, by being incinerated in flames or choking on smoke. Nearly a third of all koalas in NSW have died and about a third of their habitat has been destroyed, federal environment minister Sussan Ley said in December.

Nearly a third of all koalas in NSW have died and about a third of their habitat has been destroyed, federal environment minister Sussan Ley said in December.

Photos from the ground show koalas with singed fur, raw patches of burned flesh, and blistered paws. Even if they are rescued and treated, sometimes their injuries are simply too extensive to survive.

Let’s take a look at the koala.

The word koala comes from the Dharug “gula,” meaning no water. It was at one time thought, since the animals were not observed to come down from trees often, that they were able to survive without drinking. The leaves of the eucalyptus tree have a high water content, so the koala does not need to drink often. But the notion that they do not need to drink water at all was shown to be a myth. Because of the koala’s supposed resemblance to a bear, it was often misnamed the koala bear, particularly by early settlers. It still is to this day, with many identifying the animal as a “koala bear.”

The koala is a stocky animal with a large head and non-existent tail. It has a body length of 24–33 inches and weighs 9–33 lbs., making it among the largest arboreal marsupials. Koalas from Victoria are twice as heavy as those from Queensland. The species is sexually dimorphic (the occurrence of two types of individuals in the same species, distinct in coloring and size), with males 50 percent larger than females. Males are further distinguished from females by their more curved noses and the presence of chest glands, which are visible as hairless patches. 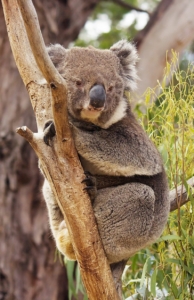 The koala has one of the smallest brains in proportion to body weight of any mammal, only 0.68 oz. Because of its small brain, the koala has a limited ability to perform complex, unfamiliar behaviors. For example, when presented with plucked leaves on a flat surface, the animal cannot adapt to the change in its normal feeding routine and will not eat the leaves. The koala’s olfactory senses are normal, and it is known to sniff the oils of individual branchlets to assess their edibility. Its round ears provide it with good hearing. A koala’s vision is not well developed, and its relatively small eyes are unusual among marsupials in that the pupils have vertical slits.

The koala has several adaptations for its eucalypt diet, which is of low nutritional value, of high toxicity, and high in dietary fiber. Koalas may also store food in their cheek pouches before it is ready to be chewed.

Koalas are herbivorous, and while most of their diet consists of eucalypt leaves, they can be found in other kinds of trees. They tend to choose species that have a high protein content and low proportions of fiber.

Koalas may live from 13 to 18 years in the wild. While female koalas usually live this long, males may die sooner because of their more hazardous lives. Koalas usually survive falls from trees and immediately climb back up, but injuries and deaths from falls do occur, particularly in inexperienced young and fighting males. At around six years of age, the koala’s chewing teeth begin to wear down and their chewing efficiency decreases. Eventually, the cusps disappear completely and the animal will die of starvation.

Koalas have few predators, dingos and large pythons may prey on them; birds of prey (such as powerful owls and wedge-tailed eagles) are threats to young. Koalas are generally not subject to external parasites, other than ticks in coastal areas.

The animals are vulnerable to bushfires due to their slow movements and the flammability of eucalyptus trees. The koala instinctively seeks refuge in the higher branches, where it is vulnerable to intense heat and flames. Bushfires also fragment the animal’s habitat, which restricts their movement and leads to population decline and loss of genetic diversity. Dehydration and overheating can also prove fatal. Consequently, the koala is vulnerable to the effects of climate change. Models of climate change in Australia predict warmer and drier climates, suggesting that the koala’s range will shrink in the east and south to more mesic habitats.

According to Australian health minister Sussan Ley, the 2019-20 Australian bushfire season, and especially fires in NSW, resulted in the death of up to 8,400 koalas (30 percent of the local population) on New South Wales’s mid-north coast.

The first written reference of the koala was recorded by John Price, servant of John Hunter, the Governor of New South Wales. Price encountered the “cullawine” on January 26, 1798, during an expedition to the Blue Mountains, although his account was not published until nearly a century later in Historical Records of Australia. In 1802, French-born explorer Francis Louis Barrallier encountered the animal when his two Aboriginal guides were returning from a hunt,

Koalas were hunted for food by Aboriginals. According to the customs of some tribes, it was considered taboo to skin the animal, while other tribes thought the animal’s head had a special status, and saved them for burial.

The koala was heavily hunted by European settlers in the early 20th century, largely for its thick, soft fur. More than two million pelts are estimated to have left Australia by 1924. Pelts were in demand for use in rugs, coat linings, muffs, and as trimming on women’s garments. Extensive cullings occurred in Queensland in 1915, 1917, and again in 1919, when over one million koalas were killed with guns, poisons, and nooses. The public outcry over these cullings was probably the first wide-scale environmental issue that rallied Australians.

Australia has the highest rate of species loss of any area in the world, and researchers fear that rate could increase as the fire disaster continues.

Of the four remaining teams in the NFL playoffs, only Tennessee has never won a Super Bowl. They appeared in Super Bowl XXXIV in January 2000. To which team did they lose?

Roland’s Trivia Question for Thursday, January 16, 2020 CRITTER CHATTER: What is involved in caring for wild animals for rehabilita...
Scroll to top