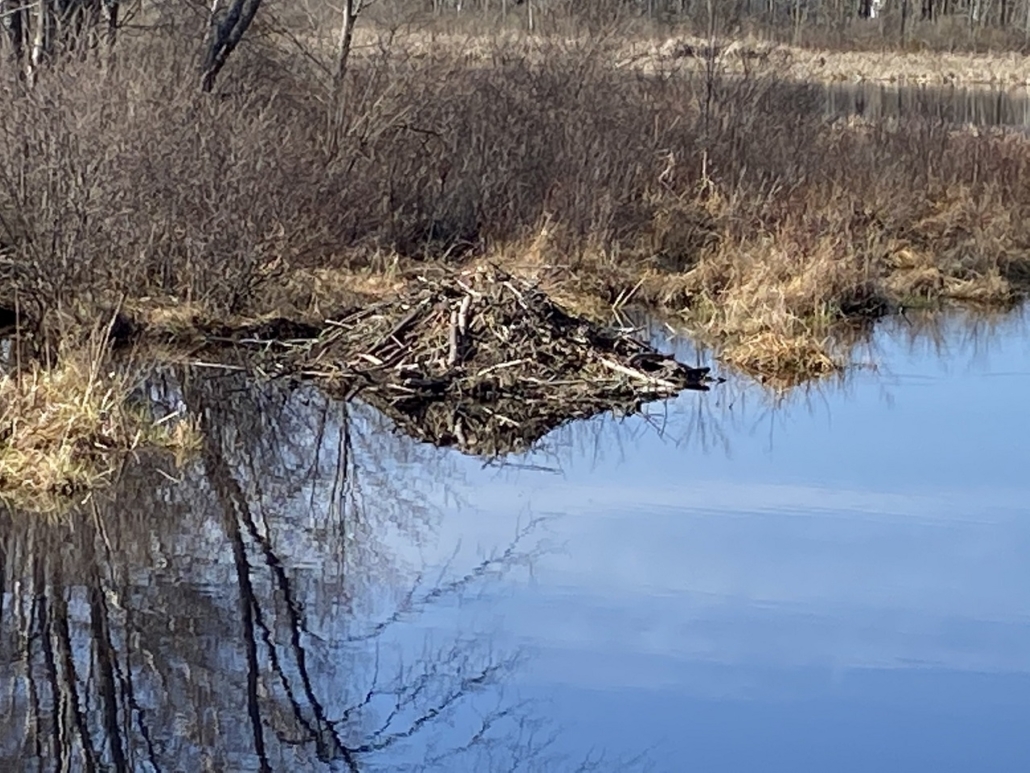 A beaver lodge in the Muldoons, in China, near the China Road. (photo by Roland D. Hallee)

Part of my daily routine is when I first get up in the morning, I grab the local daily newspaper, and a cup of coffee, and get caught up on what happened the day before. A ritual that I have done for more than 50 years.

Recently, I noticed articles, and letters to the editor, that have brought beavers to the forefront of conversations. From articles about beaver trappers, to critics of the avocation.

So, let’s take a look at those rodents and their contributions to the world around us. 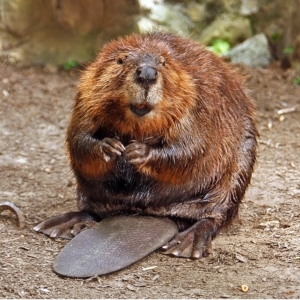 Beavers are large, semiaquatic rodents native to the temperate Northern Hemisphere. Beavers are the second-largest living rodents after the capybaras. We all know what a beaver looks like so I won’t go into any descriptions.

Beavers build dams and lodges using tree branches, vegetation, rocks and mud; they chew down trees for building material. Dams impound water and lodges serve as shelters. Their infrastructure creates wetlands used by many other species, and because of their effect on other organisms in the ecosystem, they are considered a keystone species. Adult males and females live in monogamous pairs with their offspring. When they are old enough, the young will help their parents repair dams and lodges and may also help raise newly-born offspring. Beavers hold territories and mark them using scent mounts made of mud, debris and castoreum, a urine-based substance excreted through the beaver’s castor sacs. Beavers can also recognize their kin by their anal gland secretions and are more likely to tolerate them as neighbors.

Historically, beavers have been hunted for their fur, meat and castoreum. Castoreum has been used in medicine, perfume and food flavoring, while beaver pelts have been a major driver of the fur trade. Before protections began in the 19th and early 20th centuries, overhunting had nearly exterminated the species. Their populations have rebounded, and they are listed as least concern by the International Union for Conservation of Nature (IUCN) Red List of mammals. In human culture, the beaver symbolizes industriousness and is the national animal of Canada.

The English word “beaver” comes from the Old English word beofor or befor (recorded earlier as bebr) and is connected to the German word Biber and the Dutch word bever. The ultimate origin of the word is from an Indo-European root for “brown.”

Beavers belong to a rodent suborder along with kangaroo rats, kangaroo mice, pocket mice and spiny pocket mice, and the gophers.

Beavers have massive skulls adapted for withstanding the forces generated by their powerful chewing muscles. Their four chisel-shaped incisors grow continuously. The incisors’ outer enamel is very thick and colored orange due to the presence of iron compounds. The eyes, ears and nostrils are arranged so they can remain above water when the rest of the body submerges. The nostrils and ears have valves that close underwater while membranes cover the eyes. Unusual among mammals, the epiglottis ­ – the thin lidlike piece of cartilage that folds back over the opening of the windpipe during swallowing thus preventing food from entering the lungs – is contained in the nasal cavity rather than the throat, preventing water from flowing into the larynx and trachea. In addition, the back of the tongue can rise and create a waterproof seal. A beaver’s lips can close behind the incisors, allowing for chewing in water.

Beavers can hold their breath for as long as 15 minutes. However, they typically remain underwater for no more than five or six minutes. Dives generally last less than 30 seconds and are usually shallow. When diving, their heart rate decreases to 60 beats per minute, around half its normal function, while blood flow to the brain increases. Beavers also have a high tolerance for carbon dioxide in their body. When surfacing, the animal can replace 75 percent of the air in its lungs in one breath, compared to 15 percent for a human.

The North American beaver is widespread throughout most of the United States and Canada and can be found in northern Mexico.

Historically, the North American beaver was trapped and almost extirpated because its fur was highly sought after. Protections have allowed the beaver population on the continent to rebound to an estimated 6.2 million by the late 20th century; this is a fraction of the originally estimated 60 – 400 million North American beavers before the days of the fur trade.

Beavers prefer areas with flatter terrain and diverse vegetation close to the water. North American beavers colonize an area where trees are near the water but can harvest trees several hundred feet away. Beavers have also been recorded in mountainous areas. Dispersing beavers will use certain habitats temporarily before arriving at their final destinations. These include small streams, temporary swamps, ditches and even backyards. These sites lack important resources, so the animals do not remain there for long. Beavers have settled increasingly at or near human-made environments, including agricultural areas, suburbs, golf courses and even shopping malls.

Beavers need trees and shrubs as building material for dams, which impound flowing water to create a pond for them to live in, and lodges, which provide shelter and protection. Without such material, beavers dig burrows into a bank to live. Construction begins in late summer or early fall, and they repair them whenever needed.

When chewing down a tree, beavers bite the trunk at a 45-degree angle and chew with the side of the mouth; alternating between the left and right sides. Tree branches are cut and carried through land and water using the powerful jaw and neck muscles. Other building materials, like mud and rocks, are carried under the chin with the forelimbs.

The sound of running water appears to stimulate dam-building, and the sound of a leak in a dam triggers them to repair it.

Beavers make two types of lodges; bank lodges and open-water lodges. Bank lodges consist of tunnels and holes in steep-sloped banks with sticks piled over them. The more complex freestanding, open-water lodges are built over a platform of piled-up sticks. The roof is sealed up with mud apart from an air vent at the top. Both types are accessed by underwater entrances. The space inside the lodge is known as the living chamber which is above the water line. A dining area may exist near the water.

Beavers are mainly nocturnal and spend the daytime in their shelters. They do not hibernate during winter, and spend much of their time in their lodges.

Beaver pelts were the driving force of the North American fur trade.

Beavers have been hunted, trapped and exploited for their fur, meat and castoreum. Since they typically stayed in one place, trappers could easily find the animals and would kill entire families in a lodge. Ancient people appear to have believed the castor sacs of the beaver were its testicles. Aesop’s Fables describes beavers chewing off their testicles to preserve themselves from hunters, (which is impossible because a beaver’s testicles are inside its body); this myth has persisted for centuries. Tools for hunting beavers included deadfalls, snares, nets, bows and arrows, spears, clubs, firearms and steel traps. Castoreum was used to bait the animals.

Native American myths emphasize the beaver’s skill and industriousness. In the mythology of the Haida, beavers are descended from the Beaver-Woman, who built a dam on a stream next to their cabin while her husband was out hunting and gave birth to the first beavers. In a Cree story, the Great Beaver and its dam caused a world flood. Other tales involve beavers using their tree chewing skills against an enemy. Beavers have been featured as companions in some stories, including a Lakota tale where a young woman escapes her evil husband with the help of her pet beaver.

The beaver has long been associated with Canada, appearing on the first pictorial postage stamp issued in the Canadian colonies in 1851 – the so-called “Three-Penny Beaver”. It was declared the national animal in 1975. The five-cent coin, the coat of arms of the Hudson’s Bay Company and the logos for Parks Canada and Roots Canada use its image. Bell Canada used two cartoon beavers, Frank and Gordon, in their advertising campaign from 2005 to 2008. However, the beaver’s status as a rodent has made it controversial, and it was not chosen to be on the Arms of Canada in 1921. The beaver has commonly been used to represent Canada in political cartoons, typically to signify it as a benign nation, and as subject to both affection and ridicule. In the United States, the beaver is the state animal of New York and Oregon. It is also featured on the coat of arms of the London School of Economics.

But one thing beavers don’t have, and it’s a cartoon character. You have a rabbit, mouse, duck, moose, squirrel, and many other animals used as cartoon characters, but no beavers. The closest you can come is Theodore “the Beaver” Cleaver, on the TV show, Leave it to Beaver.

Sometimes, they just don’t get any respect.

Which two Red Sox stars share the record for the most All-Star Game appearances with 18 each?