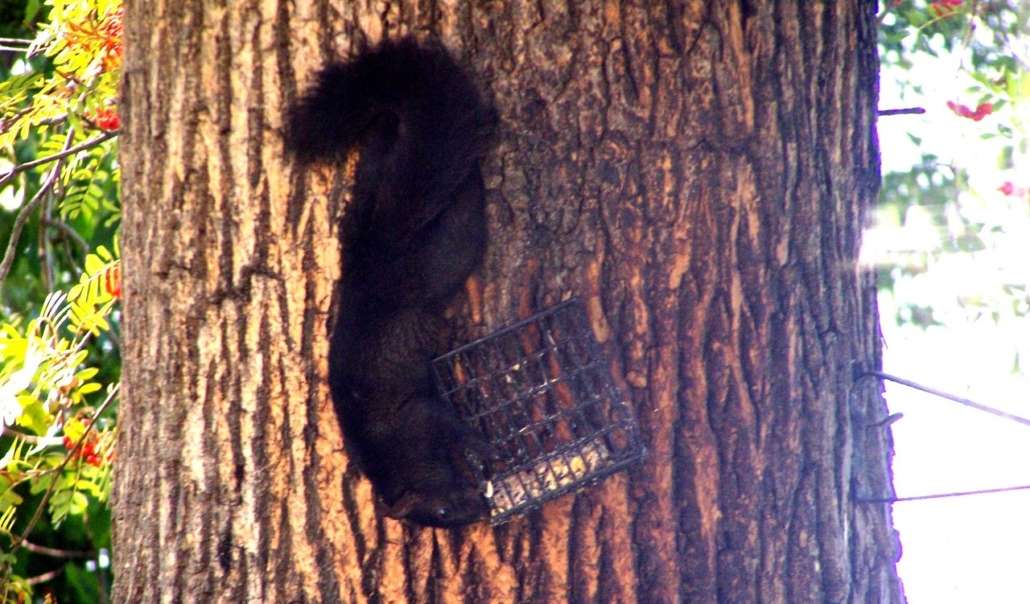 I received an email recently from a reader/supporter, from China Village, who sent along a photo of a black squirrel he has seen around his home. He asked if I could do a column on them. I did a couple of years ago, but here goes, to refresh everyone’s memory.

I know they exist, but just how many are there?

Several years ago I had the rare opportunity to see a black squirrel in Waterville. In North America, black squirrels are uncommon, with one estimate putting them at a rate of one in every 10,000 squirrels. In 1961, students at Kent State University, in Ohio, released 10 black squirrels that had been captured by Canadian wildlife authorities. The squirrels now populate the campus and have become the school’s unofficial mascot. Their coloring might help them hide from predators, which might come in handy at Kent State: The campus is also home to hawks.

Black squirrels have been spotted in both the United States and the United Kingdom, and now scientists believe they know why. Like many animals with unusual color schemes, black squirrels are the result of a genetic detour. Researchers at Anglia Ruskin University, Cambridge University, and the Virginia Museum of Natural History, collaborated on a project that tested squirrel DNA. Their findings, which were published in BMC Evolutionary Biology, demonstrated that the black squirrel is the product of interspecies breeding between the common gray squirrel and the fox squirrel.

The black squirrel is actually a gray squirrel with a faulty pigment gene carried over from the fox squirrel that turns their fur a darker shade. (Some fox squirrels, which are usually reddish-brown, are also black.)

Scientists theorize a black fox squirrel may have joined in on a mating chase involving gray squirrels and got busy with a female. The black fur may offer benefits in colder regions, with squirrels able to absorb and retain more heat, giving them a slight evolutionary edge.

According to Mental Floss‘ Jake Rossen, black squirrels are relatively rare, constituting just one in 10,000 of the seemingly ubiquitous rodents.

Black squirrels are actually grey squirrels with a genetic mutation that causes them to have black fur. They are more aggressive and territorial than the gray squirrels, too, and the result is that the black squirrels will usually run all the other squirrels “out of Dodge”.

The new work builds on research from 2014, which found that the black fur is caused by the grey squirrel having a pigment gene with a missing piece of DNA.

In mythical folklore, the black squirrel symbolism does not mean good luck. Instead, it means solar eclipse according to some legends. Therefore, a black squirrel is the enemy of humanity and needs to be destroyed if mankind wants to enjoy the heat and light of the sun. Of course, this doesn’t mean you have to go out and dispatch a black squirrel just because he’s hanging out in your neighborhood.

Black squirrels normally live up to a year, but some have lived up to 10 years. Black squirrels will eat anything they are offered, often feeding on nuts and acorns, any kind of seed, fruit, insects and even bird eggs. Mating occurs from December through January.

If you’re fortunate enough to see, one enjoy. He is merely a gray squirrel in disguise.

What is the New England Patriots logo commonly referred as?