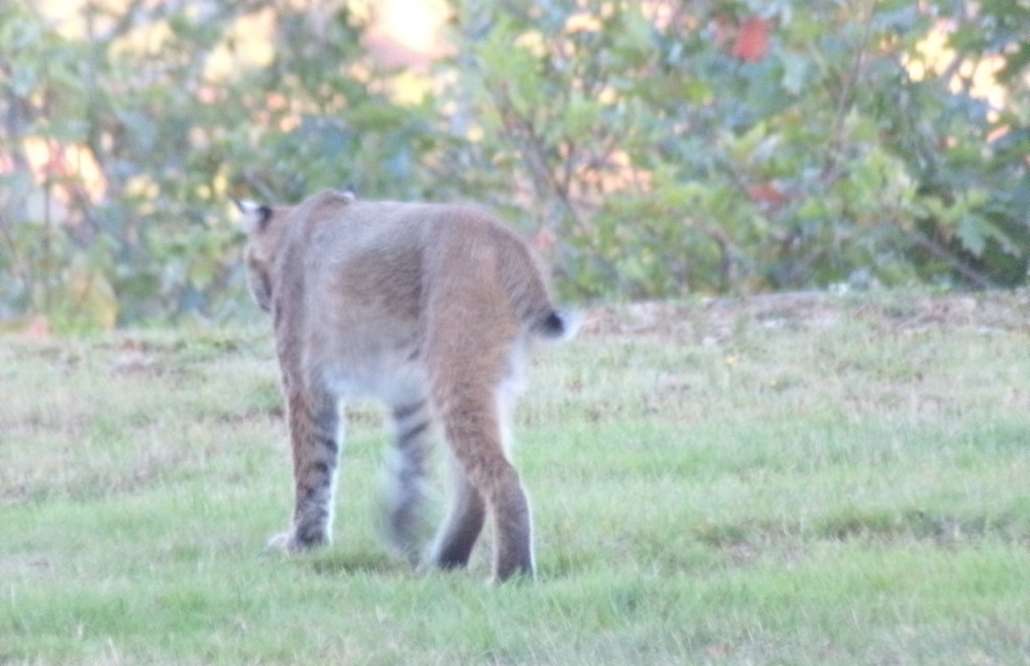 This bobcat was recently photographed strolling through Phil and Joann King’s yard, in Palermo. (photo by Phil & Joann King)

I recently received an email from Phil and Joann King, of Palermo, telling of a sighting on a bobcat in their yard. They live on the Hostile Valley Road, and the bobcat casually strolled through their property during the night. They say he glanced through the sliding glass window and strolled up to the garden. According to them, he seemed completely unconcerned.

Bobcats are common in Maine, some, obviously, more visible than others. They tend to be solitary and generally travel only at night.

The bobcat, Lynx rufus, also known as the red lynx, is a medium-sized cat native to North America. It ranges from southern Canada through most of the contiguous United States to Oaxaca, in Mexico. It is listed as Least Concern on the International Union for Conservation of Nature, IUCN, Red List since 2002, due to its wide distribution and large population. Although it has been hunted extensively both for sport and fur, populations have proven stable, though declining in some areas.

It has distinctive black bars on its forelegs and a black-tipped, stubby (or “bobbed”) tail, from which it derives its name. It reaches a total length (including the tail) of up to 50 inches. It is an adaptable predator inhabiting wooded areas, semidesert, urban edge, forest edge, and swampland environments. It remains in some of its original range, but populations are vulnerable to extirpation by coyotes and domestic animals.

The small tufts on a bobcat’s ears are difficult to spot at even moderate distance.

Though the bobcat prefers rabbits and hares, it hunts insects, chickens, geese and other birds, small rodents, and deer. Prey selection depends on location and habitat, season, and abundance. Like most cats, the bobcat is territorial and largely solitary, although with some overlap in home ranges. It uses several methods to mark its territorial boundaries, including claw marks and deposits of urine or feces. The bobcat breeds from winter into spring and has a gestation period of about two months.

The bobcat is thought to have evolved from the Eurasian lynx, which crossed into North America by way of the Bering Land Bridge during the Pleistocene, arriving as early as 2.6 million years ago.

The adult bobcat is 18.7–49.2 inches long from the head to the base of its distinctive stubby tail, averaging 32.6 inches; the tail is 3.5 to 7.9 inches long. The adult male bobcat is slightly larger than the female.

The species’ range does not seem to be limited by human populations, as long as it can still find a suitable habitat.

The bobcat is active mostly during twilight. It keeps on the move from three hours before sunset until about midnight, and then again from before dawn until three hours after sunrise. Each night, it moves from two to seven miles along its habitual route. This behavior may vary seasonally, as bobcats become more diurnal during fall and winter in response to the activity of their prey, which are more active during the day in colder weather.

The bobcat is able to survive for long periods without food, but eats heavily when prey is abundant. During lean periods, it often preys on larger animals, which it can kill and return to feed on later. The bobcat hunts by stalking its prey and then ambushing with a short chase or pounce. Its main prey varies by region: in the eastern United States, it is the eastern cottontail and New England cottontail, and in the north, it is the snowshoe hare. When these prey species exist together, as in New England, they are the primary food sources of the bobcat.

Bobcats are also occasional hunters of livestock and poultry. While larger species, such as cattle, and horses, are not known to be attacked, bobcats do present a threat to smaller ruminants, such as pigs, sheep and goats.

The adult bobcat has relatively few predators. However rarely, it may be killed in interspecific conflict by several larger predators or fall prey to them. Cougars and gray wolves can kill adult bobcats, a behavior repeatedly observed in Yellowstone National Park. Coyotes have killed adult bobcats and kittens.

Diseases, accidents, hunters, automobiles, and starvation are the other leading causes of death. Juveniles show high mortality shortly after leaving their mothers, while still perfecting their hunting techniques. The bobcat has long been valued both for fur and sport; it has been hunted and trapped by humans, but has maintained a high population, even in the southern United States, where it is extensively hunted. In the 1970s and 1980s, an unprecedented rise in price for bobcat fur caused further interest in hunting, but by the early 1990s, prices had dropped significantly.

Stories featuring the bobcat, in many variations, are found in some Indigenous cultures of North America. In a Shawnee tale, the bobcat is outwitted by a rabbit, which gives rise to its spots. After trapping the rabbit in a tree, the bobcat is persuaded to build a fire, only to have the embers scattered on its fur, leaving it singed with dark brown spots.

The Mohave people believed dreaming habitually of beings or objects would afford them their characteristics as supernatural powers. Dreaming of two deities, cougar and lynx, they thought, would grant them the superior hunting skills of other Tribes. European-descended inhabitants of the Americas also admired the cat, both for its ferocity and its grace, and in the United States, it “rests prominently in the anthology of … national folklore.”

Grave artifacts from dirt domes excavated in the 1980s along the Illinois River revealed a complete skeleton of a young bobcat along with a collar made of bone pendants and shell beads that had been buried by the Hopewell culture. The type and place of burial indicate a tamed and cherished pet or possible spiritual significance. The Hopewell normally buried their dogs, so the bones were initially identified as remains of a puppy, but dogs were usually buried close to the village and not in the mounds themselves. This is the only wild cat decorated burial on the archaeological record.

What’s the diameter of a basketball hoop in inches?