The weather has warmed, the snow is melting and the streams are bustling with activity as the spring runoff is in full swing. 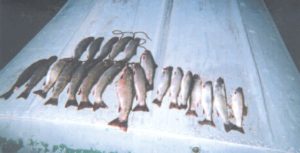 A party of six anglers landed these 22 brook trout on a trip to Nesowadnehunk Lake several years ago. Contributed photo

On a recent trip to Vermont, my wife and I saw many streams along the route swelling their banks and looking primed for brook trout fishing.

I have been on many a brook trout fishing trip, mostly to Nesowadnehunk Lake in northern Maine where the lake is exclusively brook trout – fly fishing only.

The meat of the brook trout, in my humble opinion, is the best tasting and sweetest of all the fish species, including salmon, probably because they are of the same family of Salmonidae. We have consumed many a brook trout by simply cooking them straight over a wood fired, outside fireplace, with no seasoning whatsoever.

The Eastern Brook Trout, Salvelinus fontinalis, varies in size depending on water temperature, productivity and food sources. Brook trout sizes will range from 7-1/2 to 17-1/2 inches in different lakes and streams. The stream brook trout is slower growing and usually much smaller than their lake relatives.

The brook trout is also known in other parts of its range as speckled trout, squaretail, mud trout and brook charr.

KI Jo-Mary Multiple Use Management Forest is a 175,000-acre, privately-owned, commercial forest located between Millinocket, Greenville and Brownville. Included within its boundaries are over 30 miles of the Appalachian Trail, the Gulf of Hagas Reserve, the Hermitage, the east and west branches of the Pleasant River, White Brook, more than 50 lakes and ponds and over 100 miles of brooks, streams, and rivers.

The brook trout has a dark green to brown color, with a distinctive marbled pattern of lighter shades across the flanks and back, and extending at least to the dorsal fin, and often to the tail. A distinctive sprinkling of red dots, surrounded by blue halos, occurs along the flanks. The belly and lower fins are reddish in color, the latter with white leading edges. Often the underparts, especially in the males, becomes very red or orange when the fish are spawning.

The brook trout’s range is varied but are increasingly becoming confined to higher elevations. Their southern range has been drastically reduced, with fish being restricted to higher-elevation, remote streams due to habitat loss and introductions of brown and rainbow trout. 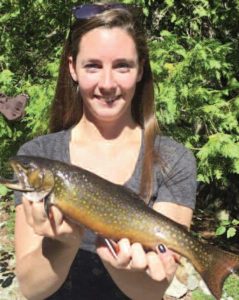 Kassie Brunette, of Belgrade, displays a brook trout she caught last summer while fishing in the Jo-Mary Multiple Use Manage­ment Forest, in northern Maine.

Until the introduction of brown and rainbow trout, the brook trout attracted the most attention among anglers, especially fly-fishermen, from colonial times through the first 100 years of U.S. history. Following the decline in brook trout populations in the mid-19th century, anglers flocked to the Adirondacks in upstate New York and the Rangeley Lakes region in Maine to pursue the brook trout.

The world record brook trout was caught by Dr. W. J. Cook on the Nipigon River, in Ontario, in July 1915, at 31 inches. The weight couldn’t be confirmed because the badly decomposed fish weighed only 14.5 pounds after having been in the bush without refrigeration for 21 days.

Brook trout in North America became extirpated from many waterways due to land development, forest clear-cutting, and industrialization. Streams and creeks became polluted, dammed, or silted. The brown trout, not native to North America, has replaced the brook trout in many of its native waters.

Let’s just hope the many clean, pure waterways we still have in Maine remain that way to sustain the fate of the brook trout in a positive way. In some lakes where brook trout is supreme, we anglers always fear the possibility of other species being introduced illegally. We must remain vigilant.

Squaring off in Skowhegan Give Us Your Best Shot! Week of April 13, 2017
Scroll to top