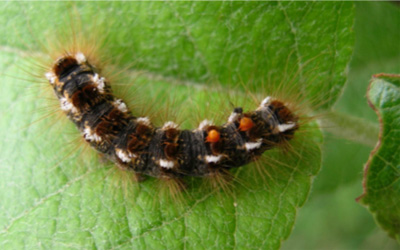 Well, it looks like the brown-tail moth caterpillar is back in the news in 2021 with news that they are abundant in the central Maine area, including Waterville, Vassalboro, China, Albion and Winslow, according to a Maine Department of Agriculture Conservation and Forestry report. In all, 54 Maine communities were on the list.

I have seen and been around brown-tail moth caterpillars before, but the summer of 2020 was my first contact with one.

We had been doing some extensive outdoor renovations at camp this spring. With the tick population at record high numbers, we’ve been clearing and pushing back growth and decaying leaves further back into the woods, away from the camp. We had also torn down our old screened-in room, and prepared a new platform for the new one to be installed later. During all of this, we dress accordingly, long-sleeved shirts, long pants, socks and boots, to try to alleviate the possibility of ticks jumping on-board.

Apparently, there was another enemy out there. With the high, sustained winds, I somehow came in contact with airborne hairs from the brown-tail moth caterpillar. Saturday found both my arms, left shoulder and upper thigh on my left leg, covered with a pinkish rash, that itched like the dickens.

I have since dispatched three of the caterpillars I have found strolling along my deck.

They were accidentally introduced to the United States in the 1890s. During the early 20th century they were present from eastern Connecticut northward into New Brunswick, Canada, but a subsequent severe population collapse reduced the territory to parts of coastal Maine and Cape Cod, Massachusetts, by the late 20th century. One theory for the decline appeared to be a parasite introduced to combat gypsy moths. Starting in 2015 there has been a population spike and territory expansion along coastal Maine.

Hairs from the caterpillars are toxic for humans, causing a poison ivy-like itchy rash of up to weeks duration due to mechanical and chemical irritation. Direct contact with larvae is not necessary, as the hairs are shed and can become windblown. Toxins in the hairs remain potent for up to three years. Outdoor activities such as mowing a lawn or raking leaves in the fall can cause exposure.

The brown-tail moth is an invasive species in the United States and Canada, having arrived in Somerville, Massachusetts, circa 1890, and becoming widespread there and in neighboring Cambridge by 1897. Initial outbreaks were most evident in pear and apple trees. Doctors reported “poisonings” (skin rash) far worse than poison ivy rash. Within a few years it was seen as a serious, fast-spreading, horticultural and health problem – apparently, not enough though, to cause a complete shutdown of the country. Through the early parts of the 20th century it was present in much of New England from eastern Connecticut to Maine, and northward into New Brunswick, Canada, but the 1906 introduction of the parasitic fly Compsilura concinnata to counter gypsy moths collaterally impacted brown-tail moths. By the late 20th century the habitat was reduced to the coast and islands of Maine, and also parts of Cape Cod, Massachusetts. Cold and wet weather hinders re-expansion of the population outside its current territories, although starting in 2015 there has been a population spike and territory expansion in coastal Maine, from Portland to Bar Harbor.

Photographs taken from aerial fly-overs are used to identify areas where the trees have been denuded of leaves, by the moth, and where the branch-tip tents are present. The white-winged adults are nocturnal and strongly attracted to light; a report from 1903 likened their appearance around streetlights as being akin to heavy snowfall.

The brown-tail moth produces one generation a year. Eggs are laid in July and hatch in August.

In the United States, many species of birds prey on the winged adults, including English house sparrows and blue jays (I wonder if that is what has led to an increased number of blue jays around our bird feeders at camp?)

How to control it? Branch-tip webs can be clipped in winter and very early spring, and either dropped into a bucket of soapy water or burned. Gloves should be worn. Appropriate pesticides should be applied before early May because that is when the larvae start to develop harmful hairs. For organic garden and farm situations there are sprays that use a strain of Bacillus thuringiensis (Bt).

Cicely Blair wrote a paper about the rash caused by the brown-tail moth caterpillar in the British Isles. It, and other descriptions, confirmed that loose hairs can break off and cause very itchy rashes on contact with skin, as well as breathing difficulties similar to asthma if inhaled. Rashes can persist for weeks. The same symptoms have been reported as far back as 1903. The reactions are due to a combination of mechanical and chemical stimuli, the barbed hairs in effect becoming lodged in and physically irritating the skin.

The species should be handled using protective gloves at all stages of its life cycle. Shed hairs blow about, and can be brought indoors on clothing and shoes, so rashes can occur without the victim coming in direct contact with the caterpillars.

Brown-tail larvae have been reported as feeding on 26 genera of non-resinous trees and shrubs belonging to 13 different families. This is considered unusual. Non-specific host plant feeding combined with its tendency to reach extreme outbreak densities makes this species a major pest of fruit orchards, ornamental trees and hardwood forests. Partial list of plant species: apple, cherry, beach plum (Cape Cod, Massachusetts), beech, elm, grape, hops, maple, oak, pear, raspberry, rose and willow. An early description of the introduction to the United States in the 1890s identified pear and apple trees as most greatly afflicted, but mentioned that once trees were entirely bare of leaves, the larvae would descend to the ground in great numbers and move toward any leafy plant, including vegetable plants.

The hairs are almost like silent attackers. You may acquire the rash without even knowing it, as I did. All the precautions and protections I took were to no avail once the hairs became airborne.

I did find out, though, that baby powder will relieve the itching, but the best “antidote” I found was Benadryl spray or cream. That completely took away the itching, although the rash remained.

Meanwhile, be on the lookout for the little irritating critters come warmer weather.

In Super Bowl LV, the Kansas City Chiefs failed to score a touchdown in the game. This has happened three times in the Super Bowl era. Once in 1971 when Dallas defeated Minnesota, 24-3. When was the other?

Roland’s Trivia Question for Thursday, February 11, 2021 GROWING YOUR BUSINESS: Why do customers use your company?
Scroll to top