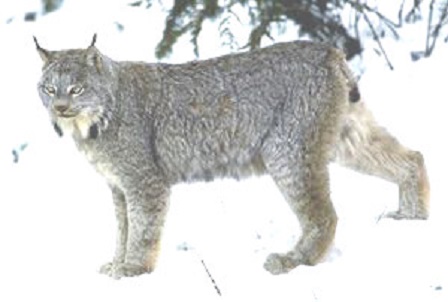 Every once in a while, the conversation comes up about Canada lynx in Maine. Are they present in the state, where can they be found, are they dangerous? The questions are many.

Friends of mine who live in Richmond have had to deal with one on their mini-farm, who liked to come around and harass the chickens.

The Canada lynx, Lynx canadensis, was listed as threatened on March 24, 2004, by the U.S. Department of Fish and Wildlife.

Canada lynx are medium-sized cats, generally 30-35 inches long and weighing 18-23 pounds. They have large feet adapted to walking on snow, long legs, tufts on the ears, and black-tipped tails. They are highly adapted for hunting snowshoe hare, the primary prey, in the snows of the boreal forest.

A report released by the U.S. Fish and Wildlife Department’s Montana Field Office offers some insights.

Lynx in the contiguous United States are at the southern margins of a widely-distributed range across Canada and Alaska. The center of the North American range is in north-central Canada. Lynx are found in coniferous forests that have cold, snowy winters and provide a prey base of snowshoe hare. Lynx, primarily found in northern Maine, prey almost exclusively on snowshoe hare, so the fate of both species are linked. Maine’s population, believed to be several hundred animals, is contiguous with populations in southern Québec and northern New Brunswick.

Lynx can only flourish in a large boreal forest that contains appropriate forest types, snow depths and high snowshoe hare densities. In the Northeast, lynx were most likely to be in areas that support deep snow (106 inches annually), associated with regenerating boreal forest landscapes. 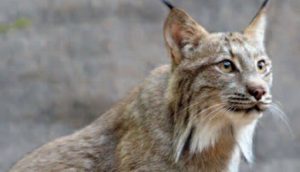 A Canada lynx in the wild.

Lynx are highly mobile and have a propensity to travel long distances, particularly when prey becomes scarce.

Some believe both lynx and coyotes would compete for the same food, but during a recent 12-year study, it was found that is not the case. Lynx roam the deep snow without problems, while coyotes travel more in packs along trails and road systems, and are more likely to attack larger prey, such as deer.

The historic and current range of the lynx in the contiguous United States is within the southern extensions of the forests of the Northeast, Great Lakes, Rocky Mountains and Cascade Mountains.

The lynx is listed in 14 states that support the environment needed to sustain the animal. Maine, New Hampshire and Vermont are three of them.

The environment in Maine is perfect to support Canada lynx populations. Harsh winters, deep snow, dense evergreen forests and sub-zero temperatures are exactly what the lynx likes. But, due to extensive hunting for its pelts in the 1960s, the cat nearly disappeared from Maine. Only a new law protecting the lynx, enacted in 1967, has protected it from hunting and trapping. It is illegal to hunt or trap Canada lynx in Maine.

Canada lynx are a federally-listed Threatened Species. There is no open season for the trapping or hunting of lynx in Maine. To protect lynx and to help Maine trappers avoid accidentally taking lynx, the department has delineated a lynx protection zone in northern Maine where special regulations are in effect.

It is believed the lynx population in Maine is at a historic high. More than 1,000 adult lynx are believed to be inhabiting the Maine forests. Even though it doesn’t sound like very many, compared to other fur bearing animals in the state, the lynx is actually living at the edge of its range.

Although the lynx was placed on the federal-threatened species list, it is only listed as a species of special concern in the state of Maine.

Legal trapping, snaring, and hunting for bobcat, coyote, wolverine, and other furbearers create a potential for incidental capture of lynx. Lynx persist throughout their range despite the incidental catch that presumably has occurred throughout the past, probably at higher levels than presently.

Even though the animal rights group won a ruling about the state taking steps to prevent the occasional accidental trappings, they were not successful in their request for temporary suspension of some trapping where lynx are present in northern Maine.

As far as human interaction is concerned, various reports have described it as ‘fearsome’, warning that it ‘could eat pets’ and be ‘aggressive if cornered’. According to the Borth Wild Animal Kingdom in Ceredigion, as of October 2017, there have never been any recorded attacks of a lynx on a human, but they are a wild animal… and will attack if cornered or trapped.

Name the four NFL teams to never appear in a Super Bowl.