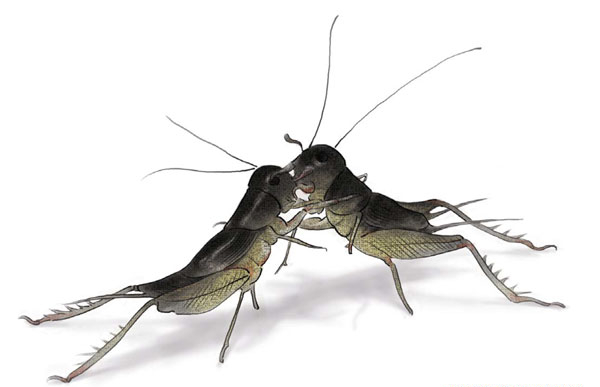 I’ve always been interested in folklore. It is intriguing how older generations and cultures came up with them, with most dealing with nature.

While sitting around a campfire with friends last Saturday, we heard a cricket chirp in the distance. One of the friends, we’ll call her Lauri, groaned at the sound. “What’s the matter?” I asked. Lauri responded, “Hearing a cricket means the end of summer.”

Well, my curiosity got the best of me. I started asking many acquaintances, friends, family and whoever else would listen: Had they ever heard of that folklore? The answer has been “no” every time. One thing I failed to ask Lauri was where she had heard that. It probably is an old wives tale or something, just like the cicada predicting the first killing frost in the fall, or the wooly bear caterpillar forecasting the severity of a winter.

Crickets, from the family Gryllidaeare

Crickets, family Gryllidaeare, are found in all parts of the world, except in cold regions at higher latitudes. They are also found in many habitats, upper tree canopies, in bushes, and among grasses and herbs. They also exist on the ground, in caves, and some are subterranean, excavating shallow or deep burrows. Some live in rotting wood, and some will even run and jump over the surface of water. They are related to the bush crickets, and more distantly, to grasshoppers.

Crickets are relatively defenseless. Most species are nocturnal and spend the day hidden. They burrow to form temporary shelters, and fold their antennae to conceal their presence. Other defensive strategies are camouflage, fleeing and aggression. Some have developed colorings that make them difficult to see by predators who hunt by sight.

Male crickets make a loud chirping sound by scraping two specially textured limbs together. This organ is located on the fore wing. Most females lack the necessary parts to stridulate, so they make no sound.

Crickets chirp at different rates depending on their species and the temperature of their environment. Most species chirp at higher rates the higher the temperature. The relationship between temperature and the rate of chirping is known as Dolbear’s law. According to this law, counting the number of chirps produced in 14 seconds by the snowy tree cricket, common in the United States, and adding 40 will approximate the temperature in degrees Fahrenheit.

Crickets have relatively powerful jaws, and several species have been known to bite humans.

Male crickets establish their dominance over each other by aggression. They start by slashing each other with their antennae and flaring their mandibles. Unless one retreats at this stage, they resort to grappling, at the same time each emitting calls that are quite unlike those uttered in other circumstances. Once one achieves dominance, is sings loudly, while the defeated remains silent.

Crickets have many natural enemies. They are eaten by large numbers of vertebrate and invertebrate predators and their hard parts are often found during the examination of animal intestines.

The folklore and mythology surrounding crickets is extensive. The singing of crickets in the folkore of Brazil and elsewhere is sometimes taken to be a sign of impending rain. In Alagoas state, northeast Brazil, a cricket announces death, thus it is killed if it chirps indoors, while in Barbados, a loud cricket means money is coming, hence the cricket must not be killed or evicted if it chirps inside the house.

In literature, the French entomologist Jean-Henri Fabre’s popular Souvenirs Entomoloquques devotes a whole chapter to the cricket. Crickets have also appeared in poetry. William Wordsworth’s 1805 poem, The Cottager to Her Infant includes the lines, “The kitten sleeps upon the hearth, The crickets long have ceased their mirth.” John Keats’ 1819 poem Ode to Autumn, includes the lines, “Hedge-crickets sing; and now with treble soft, the redbreast whistles from a garden-croft.” Could this be from where that folkore about the end of summer comes?

Crickets are kept as pets and are considered good luck in some countries. In China, they are kept in cages specially created. The practice is also common in Japan, and has been for thousands of years. Cricket fighting is a traditional Chinese pastime that dates back to the Tang dynasty (618-907). It was originally a common indulgence for emperors, but later became popular with commoners. (I hope Vince McMahon doesn’t read this!)

While serving in the Army in Southeast Asia from 1968-69 (Cambodia, Laos, Thailand and Vietnam), I learned that crickets are commonly eaten as a snack, prepared by deep frying the soaked and cleaned insects. In Thailand, there are 20,000 farmers rearing crickets, with an estimated production of 7,500 tons per year. No, I didn’t try them.

And, of course, in popular culture, we have Walt Disney’s Jiminy Cricket in the 1940 film Pinocchio, and in the 1998 film Mulan, Cri-kee is carried in a cage as a symbol of good luck.

In the media, the sound of crickets is often used to emphasize silence, often for comic effect after an awkward joke.

I’ll bet you didn’t think crickets had such a valued place in societies and cultures for centuries.