While taking a break from my chores at camp over the weekend, I tried to figure out what my column was going to be about this week. Thoughts were coming hard until I noticed all around me were blue jays galore.

Other than knowing they are scavengers, noisy and the mascot of a professional baseball team in Toronto, I had to learn more about them. 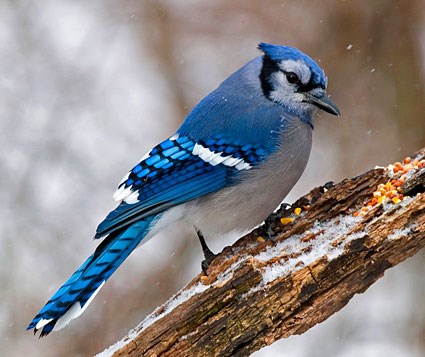 Blue jays, Cyanocitta cristata, are found in all kinds of forests but especially near oak trees. They are mostly found on the edges of forests as opposed to deep forest. They are common in both urban and suburban areas, especially where bird feeders are found.

Blue jays prefer tray feeders or hopper feeders on a post rather than a hanging feeder. We have found at camp that many of the jays we see are feeding on the ground under the hanging feeders. They prefer peanuts, sunflower seeds, and suet.

They also glean insects and take nuts and seeds in trees, shrubs and on the ground. Blue jays sometimes raid nests for eggs and nestlings, and sometimes pick up dead of dying adult birds. Stomach contents over the year are about 22 percent insect. Acorns, nuts, fruits, and grains made up almost the entire remainder. They hold food items in their feet while pecking them open. They also store food in caches to eat later.

Blue jays build their nests in the crotch or thick outer branches of a deciduous or coniferous tree, usually 10 – 25 feet above the ground. Male and female both gather materials and build the nest, but on average, the male does more gathering and female more building. Twigs used in outer part of the nest are usually taken from live trees, and the birds often struggle to break them off. The birds may fly great distances to obtain rootlets from recently dug ditches, fresh graves in cemeteries, and newly-fallen trees. Blue jays may abandon their nests after detecting a predators nearby.

The highly-recognizeable bird is known for its intelligence and complex social systems, and have tight family bonds. They often mate for life, remaining with their social mate throughout the year. Only the female incubates the eggs. The male provides all her food during incubation.

For the first 8 – 12 days after the nestlings hatch, the female broods them and the male provides food for his mate and nestlings. Females will share food gathering after that time. There is apparently a lot of individual variation in how quickly the young become independent. Blue jays communicate with each other by sound and by “body language,” using their crests. The lower the crest, the lower their level of aggression, and when they become more aggressive, the crest is high. When the blue jay squawks, the crest is virtually always held up.

Blue jays have a wide variety of vocalization, with an immense “vocabulary.” They are also excellent mimics. They have been known to mimic red-tailed hawks among other species of birds.

Some people don’t like blue jays because of their aggressive ways, but there are birds that are much more aggressive, like woodpeckers, grackles, mourning doves, mockingbirds and cardinals, throwing in gray squirrels in the mix. These species will actually keep blue jays away from feeders. So, to compensate for that, blue jays will imitate hawks when approaching a feeder to ward off the other, more aggressive birds, causing them to scatter. However, they usually return once they realize its a blue jay, and not a hawk.

Blue jay populations decreased by about 28 percent between 1966 and 2015, according to the North American Breeding Bird Survey. Also, Partners in Flight estimates a global breeding population of about 13 million birds, with 87 percent of them present in the U.S., and 13 percent in Canada. The bird is not listed on the 2016 State of North America’s Birds Watch List. They are not endangered.

The most frequent cause of death associated with humans come from attacks by dogs and cats.

Which baseball team won the first World Series championship in 1903?

Answers can be found here.