I have an idea: let’s play a game! Everybody likes a game. We’ll call it – get a load of this ingenious title – Fact or Fiction!

Many of us have pets, and we also like to watch animals. Let’s ask some questions and see if you can tell if it is fact or fiction. 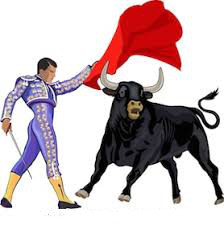 Bulls get angry when they see red?

Here are the answers:

Roland’s trivia question of the wee:

What is the most common pitch thrown by a baseball pitcher.