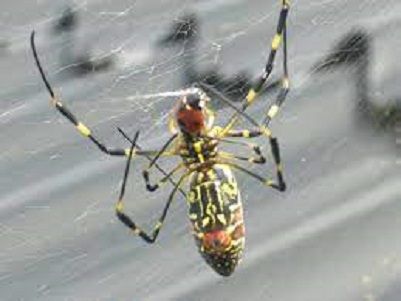 OK, ladies and gentlemen, get ready for this. The ticks are out early, the brown tail moth caterpillar is ready to wreak havoc on us for another year, and, of course, there is the black fly season. And now… A creepy, large yellow and black spider with a bulbous, bright yellow body is crawling along a tree branch, and, are you ready for this?, will be literally falling from the sky.

An invasive species of spider the size of a child’s hand is expected to “colonize” the entire East Coast by parachuting down from the sky, researchers at the University of Georgia announced last week. and no, this is not an early April Fools’ joke!

Large Joro spiders — millions of them — are expected to begin “ballooning” up and down the East Coast as early as May. Researchers have determined the spiders can tolerate cold weather, but are harmless to humans as their fangs are too small to break human skin. Although the spider is not aggressive, they will bite to protect themselves. The bite is considered quite painful, but not life-threatening.

All spiders are venomous, but some are dangerously venomous, like the black widow and brown recluse here in the United States, but the Joros are not.

The Joro spider is native to Japan but began infiltrating the U.S. in 2013, concentrating in the southeast and specifically Georgia, according to National Public Radio. (What is it with new nuisances coming from the Far East?) They fanned out across the state using their webs as tiny, terrifying parachutes to travel with the wind. They were first spotted in Hoschton, Georgia, in 2013. Since then, they have been spotted in numerous locations in northeast Georgia and also in Greenville, South Carolina. It is believed the species will become naturalized.

Andy Davis, author of the study and a researcher at Georgia’s Odum School of Ecology, says it isn’t certain how far north the spiders will travel, but they may make it as far north as Washington D.C. or even Delaware. (Whew! For a minute there I thought we were going to be Ground Zero.)

“It looks like the Joro could probably survive throughout most of the Eastern Seaboard here, which is pretty sobering,” says Davis.

They are bright yellow, black, blue, and red and can grow up to three inches.

They likely traveled across the globe on shipping containers, similar to when the Bubonic plague entered the United States. They are expected to colonize much of the Eastern Seaboard of the United States due to their relative imperviousness to the cold.

Their life cycle begins in early spring, but they get big in June and are often seen in July and August.

They’re named for Jorōgumo, a creature of Japanese folklore that can change her appearance into that of a beautiful woman. She seeks men to seduce, whom she then binds in her silk and devours.

As of 2021, their impact on their new ecosystem is unknown. They have been observed catching the brown marmorated stink bug, another invasive species that native spiders have not been known to eat, and it has also been hoped they may consume mosquitoes and flies (Wouldn’t that be great? But, be careful what you wish for).

Some hope the impact of the species will be positive due to their harmless nature and consumption of primarily invasive or nuisance insects, however, because of the relative lack of information about their ecology and the usual negative effects of most non-native species, it remains unknown whether Joro spiders may ultimately have a positive or negative effect on the ecosystem

Researchers say there’s nothing we can do. There isn’t much to stop them from getting established up and down the east coast through the ballooning dispersal method. Experts said it will likely take much longer than just this spring or summer for the spiders to get established throughout the eastern United States. Instead, it’s thought they will slowly colonize the east coast over the course of the next decade or so.

They’re coming and they’re harmless. Still, I say let’s build a wall to stop them from moving north, and keep them south of Delaware.

Who was the winning pitcher for the Boston Red Sox in the clinching game in the 2018 World Series?