We see them everywhere on our lakes. They are long, lean and stare at you from the shoreline or from tree tops. The Great Blue Heron.

The great blue heron, Ardea herodias, is found throughout most of North America, as far north as Alaska and the southern Canadian provinces in the summer months. In winter, the range extends south through Florida, Mexico, and the Caribbean to South America. Birds east of the Rocky Mountains in the northern part of their range are migratory and winter in the coastal areas of the southern United States, Central America or northern South America. From the southern United States southwards, and on the lower Pacific coast, they are year-round residents. However, their hardiness is such that individuals often remain through cold northern winters, as well, so long as fish-bearing waters remain unfrozen (which may be the case only in flowing water such as streams, creeks, and rivers). 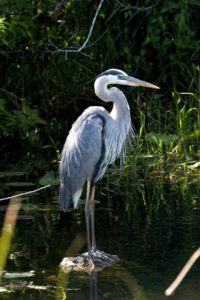 The great blue heron can adapt to almost any wetland habitat in its range. It may be found in numbers in fresh and saltwater marshes, mangrove swamps, flooded meadows, lake edges, or shorelines. It is quite adaptable and may be seen in heavily developed areas as long as they hold bodies of fish-bearing water.

Great blue herons rarely venture far from bodies of water, but are occasionally seen flying over upland areas. They usually nest in trees or bushes near water’s edge, often on islands (which minimizes the potential for predation) or partially isolated spots.

Great blue herons are widespread throughout Maine; however, a noticeable decline in their coastal nesting population has occurred since the 1980s. By enlisting volunteers, the Heron Observation Network of Maine, is able to cover what is probably three times more sites than the Maine Department of Inland Fisheries and Wildlife could cover should they do it alone.

Over 66 percent of colonies surveyed in 2017 were covered by volunteers. Coastal observations show a decline in coastal colonies with a slight increase showing for inland groups.

All the effort by volunteers, staff and contractors revealed similar results as in 2016. In 2017, they observed 60 active colonies with 629 nesting pairs. Since not all known colonies were surveyed, they typically assume that the latest survey data for those still stand, providing a more probable total of 838 nesting pairs among 81 active colonies statewide.

The number of nesting pairs on coastal islands is at its lowest level since the 1980s. With only 221 nesting pairs among seven islands, the coastal population is now down 82 percent since 1983. Since 2013, the 5-year average has been decreasing 8-16 percent each year. The inland population looks relatively stable, with small ups and downs since they began close monitoring in 2009. The average number of inland nesting pairs over the past nine years is 683. Since 2013, the 5-year average has been increasing by 1-2 percent each year.

However, the inland increases don’t make up for the losses on the coast, though there may be a lag time between the initiation of new colonies and when they become discovered. Volunteers discovered eight new colonies in 2017. Two of those colonies are within six miles of the large colony on Wreck Island (Muscongus Bay) that was lost in 2016. While these two colonies only contain 40 nesting pairs combined, they could represent some of the pairs from Wreck Island. Now, volunteers would like to find the other 60-80 pairs who abandoned that colony!

Coastal islands may no longer be preferred habitat for nesting great blue herons in Maine; however, the reasons for this change are not entirely clear. Disturbance, predators, and change in prey abundance could all be part of the equation. The Heron Observation Network of Maine will continue its monitoring efforts that, hopefully, will shed more light on this disturbing pattern.

This spring will mark the tenth anniversary of the Heron Observation Network of Maine. While they have gained invaluable information regarding the abundance and distribution of nesting great blue herons throughout the state of Maine, their work is not yet done. In 2020, they hope to repeat the Dual-Frame Aerial Survey conducted in 2015 to arrive at an updated population estimate, which in turn will give them trend information. In order for that survey to be a success, they will need to continue to collect data on as many colonies as possible between now and then. Thus, volunteers are still essential!

Reports of colonies are also essential. As colonies shift around the landscape, they need help discovering the new locations. If you know of a great blue heron colony, please don’t hesitate to report it to MDIFW. There is no harm in reporting a colony they already know about. In addition, they need more volunteers to help cover as many colonies as possible. Contact MDIFW if you are interested in joining the Heron Observation Network and monitoring a colony.

Name the three Boston Red Sox leftfielders who are enshrined in MLB’s Hall of Fame.