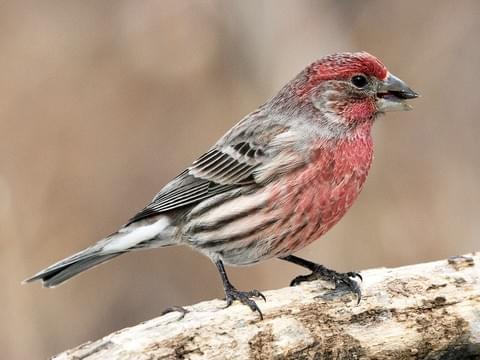 While I sit here at my computer, trying to figure out what to write about this week, I am watching several house finches at my feeders – (light bulb comes on over my head).

Oh, why not do an article about house finches?

The house finch, Haemorhous mexicanus, is a bird in the finch family. It is native to western North America, but has been introduced to the eastern half of the continent and Hawaii.

Adults have a long, square-tipped brown tail and are a brown or dull-brown color across the back with some shading into deep gray on the wing feathers. Breast and belly feathers may be streaked; the flanks usually are. In most cases, adult males’ heads, necks and shoulders are reddish. This color sometimes extends to the belly and down the back, between the wings. Male coloration varies in intensity with the seasons and comes from the berries and fruits in its diet. As a result, the colors range from pale straw-yellow through bright orange (both rare) to deep, intense red. Adult females have brown upper-parts and streaked underparts.

I always wonder why they hang around all winter. They sometimes visit the feeders during heavy rain, snow, ice, etc. Why don’t they go south?

But, these birds are mainly permanent residents throughout their range; some northern and eastern birds migrate south. Their breeding habitat is urban and suburban areas across North America, as well as various semi-open areas in the west from southern Canada to the Mexican state of Oaxaca.

Originally only a resident of Mexico and the southwestern United States, they were introduced to eastern North America in the 1940s. The birds were sold illegally in New York City as “Hollywood Finches,” a marketing ploy. To avoid prosecution under the Migratory Bird Treaty Act of 1918, vendors and owners released the birds. They have since become naturalized; in largely unforested land across the eastern U.S., they have displaced the native purple finch and even the non-native house sparrow. In 1870, or before, they were introduced to Hawaii and are now abundant on all its major islands.

There are estimated to be anywhere from 267 million to 1.7 billion individuals across North America, and is of least concern to the International Union for Conservation of Nature (IUCN). 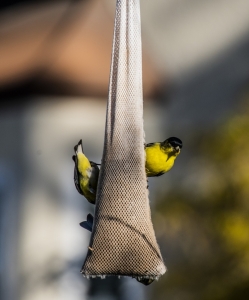 Yellow birds at a sock feeder.

House finches forage on the ground or in vegetation normally. They primarily eat grains, seeds and berries, being voracious consumers of weed seeds such as nettle and dandelion; included are incidental small insects such as aphids. They are frequent visitors to bird feeders throughout the year, particularly if stocked with sunflower or nyjer seed, and will congregate at hanging nyjer sock feeders. The house finch is known to damage orchard fruit and consume commercially-grown grain but is generally not considered a significant pest, but rather an annoyance.

Nests are made in cavities, including openings in buildings, hanging plants, and other cup-shaped outdoor decorations. Sometimes nests abandoned by other birds are used. Nests may be re-used for subsequent broods or in following years. The nest is built by the female, sometimes in as little as two days. It is well made of twigs and debris, forming a cup shape.

During courtship, the male will touch bills with the female. He may then present the female with choice bits of food, and if she mimics the behavior of a hungry chick, he may actually feed her. The male also feeds the female during breeding and incubation of the eggs, and raising of the young. The male is the primary feeder of the fledglings. Females are typically attracted to the males with the deepest pigment of red to their head, more so than the occasional orange or yellowish-headed males that sometimes occur.

The female lays clutches of eggs from February through August, two or more broods per year with two to six eggs per brood, most commonly four or five. The eggs are a pale bluish green with few black spots and a smooth, somewhat glossy surface.

In response to mite infestation, which has a more harmful effect on male chicks than on females, the mother finch may lay eggs containing females first, in order to reduce the length of time male chicks are exposed to mites. This strategy increases the likelihood that representative numbers of both sexes will survive. Shortly after hatching, she removes the empty eggshells from the nest. The female always feeds the young, and the male usually joins in. The young are silent for the first seven or eight days, and subsequently start peeping during feedings. Dandelion seeds are among the preferred seeds fed to the young.

House finches are aggressive enough to drive other birds away from places such as feeders.

The house finch may be infected by a number of parasites which caused the population of house finches in eastern North America to crash during the 1990s. The mite Pellonyssus reedi is often found on house finch nestlings, particularly for nests later in the season.

The brown-headed cowbird, a brood parasite, will lay its eggs in house finch nests, although the diet house finches feed their young is inadequate for the young cowbirds, which rarely survive.

There are many house finches that come to our feeders, and watching them makes you aware of the built-in protections they have against adverse weather conditions. They also make sure they are the only ones on the feeders at the time. I’ve seen some male finches “stand guard” while others, including the females, feed.

Remarkable creatures of nature, to say the least.

Roland’s trivia question of the day:

What MLB pitcher threw the only no-hit game in World Series history?