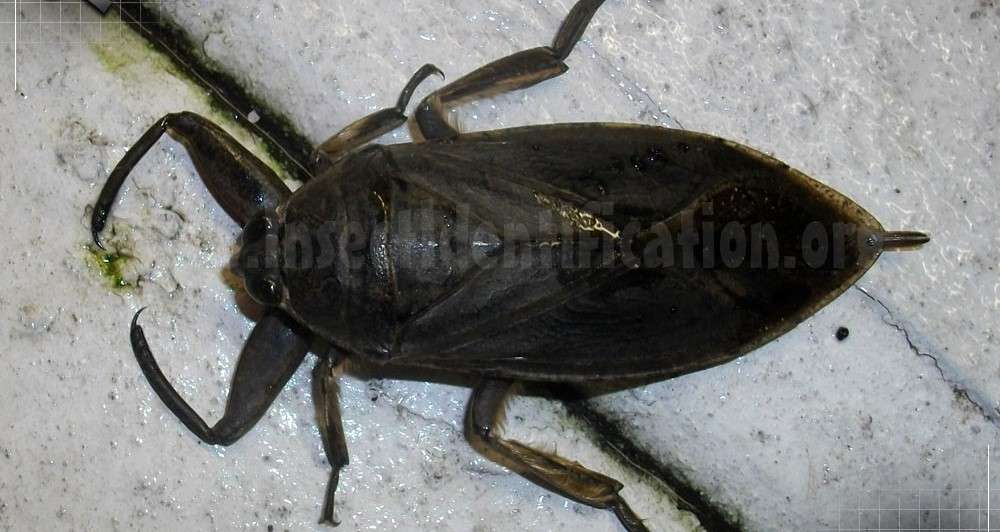 While I was playing cornhole last Friday night, I was interrupted while in the process of preparing for my next toss. It was pointed out to me that something was attached to the leg of my pants.

It was approximately two to three inches long, black/brown – at least in the evening light. Someone said it was a cicadae, but I knew better. I wasn’t sure what it was.

We sent it on its way.

Research told me it was a giant water bug,

Belostomatidae is a family of freshwater insects known as giant water bugs or colloquially as toe-biters, Indian toe-biters, electric-light bugs, alligator ticks, or alligator fleas (in Florida). They are the largest insects in the order. There are about 170 species found in freshwater habitats worldwide.

These predators are typically encountered in freshwater ponds, marshes and slow-flowing streams. They can grow to up to 4.5 inches and nearly reach the length of some of the largest beetles in the world. Giant water bugs are a popular food in parts of Asia.

They have a flattened, egg-shaped body, and usually the legs are flattened. The head features two large compound eyes, but lacks the eye-like spot. Short antennae are tucked in grooves behind the eyes. A short breathing tube can be retracted into its abdomen. Adults cannot breathe under water, so must periodically place the breathing tube at the surface for air (similar to a snorkel).

Their hind legs have two claws. The frontal legs are modified into raptorial appendages that they use to grab their prey. Once caught, the prey are stabbed with their proboscis and a powerful saliva is injected, allowing the bug to suck out the liquefied remains. Wing pads can be seen from the dorsal view. They have a greatly reduced flight apparatus and are flightless.

The giant water bugs are aggressive predators that stalk, capture, and feed on fish, amphibians, as well as aquatic invertebrates such as snails and crustaceans. The largest species have also been found to capture and feed on baby turtles and water snakes. They often lie motionless at the bottom of a body of water, attached to various objects, where they wait for prey to come near. They then strike, injecting a venomous digestive saliva with their rostrum. Although their bite is excruciatingly painful, it is of no medical significance. Occasionally, when encountered by a larger animal or a human, they have been known to “play dead” and most species can emit a fluid from their anus. Due to this, they are assumed dead by humans only to later “come alive” with painful results.

These water bugs show paternal care and these aspects have been studied extensively. In species of the subfamily, the eggs are typically laid on the male’s wings and carried until they hatch. The male cannot mate during this period. The males invest considerable time and energy in reproduction and females take the role of actively finding males to mate. This role reversal matches the predictions of R. L. Trivers’ parental investment theory where the eggs are laid on emergent vegetation and guarded by the male.

In some areas of Asia, they are considered a delicacy, and can be found for sale in markets. This is mainly in South and Southeast Asia. In South and Southeast Asia they are often collected for this purpose using large floating traps on ponds, set with black lights to attract the bugs. Adults fly at night, like many aquatic insects, and are attracted to lights during the breeding season.

In what year did the Patriots move from Boston to Foxborough and changed their name to the New England Patriots?