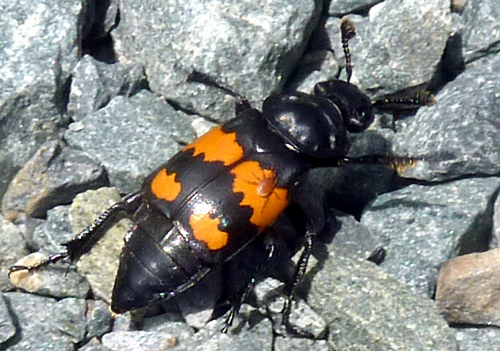 This week, let’s return to the “never seen that before” department.

This past winter, for the first time, I deployed the “better mouse trap” in camp. It consists of a five-gallon bucket, a soda can, a piece of wire, some anti-freeze and a piece of strapping. You place the wire through the can, attach it to the bucket with a piece of wire, and build a “ramp” with the piece of wood. You coat the can with peanut butter, pour the anti-freeze in the bucket, and place it in camp before you close it up in the fall.

Once the mouse smells the peanut butter, it will climb up the ramp, jump across the gap to the can, which will rotate from the weight of the mouse, and the mouse then falls into the bucket of anti-freeze. It’s very effective.

So, this spring, I had captured eight mice over the winter. After giving them a proper burial, I carefully, and properly, disposed of the anti-freeze, and placed the bucket outside until I could put it away in my storage shed. 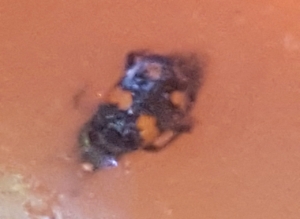 A picnic beetle in the bucket.

In the meantime, we received some rain, often, and heavy at times, which left about four inches of water in the bottom of the bucket. Last Sunday, when I finally got around to the bucket, I noticed six beetles floating in the water. They were blackish-brown, with four orange/red dots on the back. “Never seen that before!”

According to Bug Guide, at the Iowa State University Department of Entomology, they are Glischrochilus, a genus of sap-feeding and predatory beetles better known as picnic beetles or beer bugs.

They feed on exuding sap from injured trees and decaying vegetable or fungal matter. They are also attracted to ripening fruit, as well as beer, vinegar, wine, fruit juice and fermenting beverages. So, I don’t really know what attracted them to the bucket of water, that may have still had some anti-freeze residue.

As I researched more, I found they frequently drown as they feed. They congregate in large numbers – does six constitute a large number? – when such beverages are present. They are known to ruin picnics and outdoor gatherings like BBQs, earning them the name “picnic beetles” and “beer bug.”

At the university, researchers attract the bugs using bait that contains beer, molasses, vinegar and pineapples, among other ingredients.

They can be found in North America and Eurasia. In North America, their range is from Nova Scotia to British Columbia, to Florida, Kansas, New Mexico and Oregon. Their habitat consists of hanging out under the bark of injured or dying trees, on sap, oozing tree wounds, decaying or fermenting fruit. They are considered pests of certain fruit and vegetable crops like strawberries, corn, tomatoes, apricot, raspberries and peaches. They normally only become a problem when fruits are damaged or are overripe and beginning to ferment. They are extremely difficult to control because they are attracted to the odor of food. (Could it have been some remnants of peanut butter on the can?).

On strawberries, they will leave a deep cavity very similar to the damage caused by slugs. In sweet corn, an ear damaged by corn earworm will attract sap beetles. The larvae of sap beetles then feed on the undamaged kernels. They can be found from silk to ear maturity.

But it is the strawberries that are primary targets for the insect. These beetles prefer over-ripe fruit but also readily attack ripening fruit.

The use of pesticides is not very effective and is not recommended. Sap beetles have been seen on ripe fruit, so pesticides should not be used on the crop.

Carbaryl and bifenthrin can be used to control severe infestations. These pesticides may kill existing beetles, but if the fruit is present, they cannot prevent additional sap beetles from moving into the garden. As always, follow the pesticide label directions attached to the pesticide container you are using. Remember, the label is the law.

I don’t think I have to go that far. The six beetles that I had seem to be the only ones around. I have seen no others in nearly a week.

I’m just still curious why the bucket of water attracted them.

Which NFL team appeared in four consecutive Super Bowls, and lost them all?