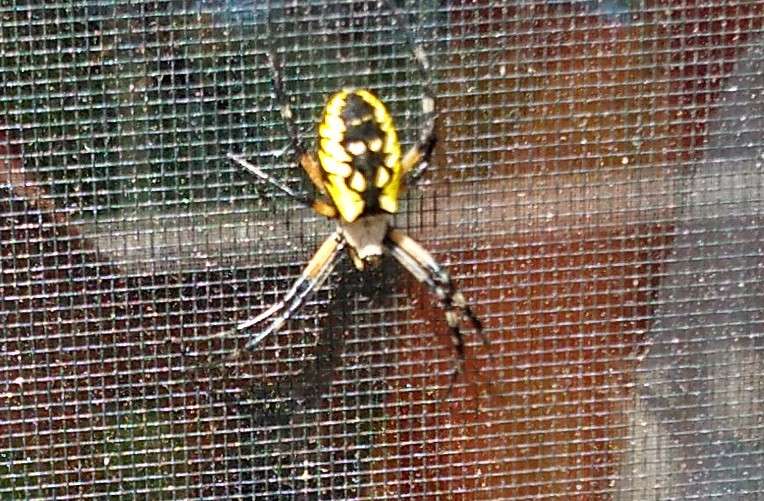 Last week I received an email from a reader who sent along a photo of a large yellow spider she found on her screen door. It was a menacing-looking thing.

The species was first described by Hippolyte Lucas in 1833. It is common to the contiguous United States, Hawaii, southern Canada, Mexico, and Central America. It has distinctive yellow and black markings on the abdomen and a mostly white cephalothorax. The body length of males range from 0.20 – 0.35 inches; females range from 0.75–1.10 inches. These spiders may bite if disturbed or harassed, but the venom is harmless to non-allergic humans, roughly equivalent to a bumblebee sting in intensity.

Yellow garden spiders often build webs in areas adjacent to open sunny fields where they stay concealed and protected from the wind. The spider can also be found along the eaves of houses and outbuildings or in any tall vegetation where they can securely stretch a web.

Female spiders tend to be somewhat local, often staying in one place throughout much of their lifetime.

The web of the yellow garden spider is distinctive: a circular shape up to two feet in diameter, with a dense zigzag of silk in the center.

The yellow garden spider can oscillate her web vigorously while she remains firmly attached in the center. This action might prevent predators like wasps and birds from drawing a good bead, and also to fully entangle an insect before it cuts itself loose. In a nightly ritual, the spider consumes the circular interior part of the web and then rebuilds it each morning with fresh new silk. The radial framework and anchoring lines are not usually replaced when the spider rebuilds the web. The spider may be recycling the chemicals used in web building. Additionally, the fine threads that she consumes appear to have tiny particles of what may be minuscule insects and organic matter that may contain nutrition.

This spider is found from Canada to Costa Rica, but less so in the basin and mountain areas of the Rockies.

These spiders are not aggressive. They might bite if grabbed, but other than for defense they do not attack large animals. Their venom often contains a library of toxins with potential as therapeutic medicinal agents.

A bite by the yellow garden spider is comparable to a bee sting with redness and swelling. For a healthy adult, a bite is not considered an issue. Though these spiders are not aggressive, people who are very young, elderly, or who have compromised immune systems should exercise caution, just as they would around a beehive or a hornet nest.

Yellow garden spiders breed twice a year. The males roam in search of a female, building a small web near or actually in the female’s web, then court the females by plucking strands on her web. Often, when the male approaches the female, he has a safety drop line ready, in case she attacks him. After mating, the male dies, and is sometimes then eaten by the female.

The female lays her eggs at night on a sheet of silky material, then covers them with another layer of silk, then a protective brownish silk. She then uses her legs to form the sheet into a ball with an upturned neck.

In the spring, the young spiders exit the sac. They are so tiny that they look like dust gathered inside the silk mesh. Some of the spiderlings remain nearby, but others exude a strand of silk that gets caught by the breeze, carrying the spiderling to a more distant area.

Females of the species are the most commonly seen in gardens. Their webs are usually characterized by a zigzag shaped extra thick line of silk in the middle extending vertically. The spiders spend most of their time in their webs, waiting for prey to become ensnared. When prey becomes caught in the web, the spider may undulate the web back and forth to further trap the insect. When the prey is secure, the spider kills it by injecting its venom and then wraps the prey in a cocoon of silk for later consumption (typically one to four hours later). Prey includes small vertebrates, such as geckos and green anoles, as well as insects.

If you find one of these around your house, it is not as dangerous as it looks.

Easy for me to say, Mr. I-don’t-like-spiders.

Who were the four outfielders on the Red Sox’ 2018 World Series championship team?