On our way home to Waterville driving along Rte. 201 recently, during the recent unseasonable warm spell, my wife and I observed a raccoon walking along the roadside in Winslow. My first thought: “A raccoon out during the day is not normal, and could mean it is rabid.”

While it is true that a rabid raccoon will exhibit a variety of unusual behaviors, activity during daytime is most definitely not a guaranteed indicator of rabies. You see, although raccoons are primarily noctural, they do often get some stuff done during the day. It’s not that unusual for a raccoon to be active in the middle of the day. We just don’t see it often. They often go off in search of food or drink, especially a nursing female raccoon who has babies to take care of, and who has extra nutritional requirements. 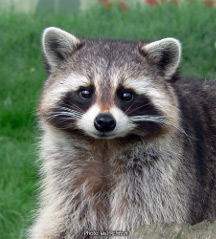 Raccoons can be cute…

Raccoons, along with foxes, skunks and bats are considered a primary carrier of the rabies virus in the United States. While any warm-blooded animal can carry rabies, these are the ones that are called “rabies vector species.”

According to the Centers for Disease Control and Prevention (CDC), only one human has ever died from the raccoon strain of rabies. That is because a rabid raccoon is usually dead within 1-3 days of becoming infected, and even if you’re bitten by a rabid raccoon, effective post-exposure treatment is available and recommended.

How can you tell if a raccoon has rabies? Rabid raccoons are very sick, mostly they are lethargic. Their walk may be erratic, or their legs paralyzed. They may be walking in circles or falling over, discharging from the eyes or mouth, or lurching in an unnatural fashion. In short, they just plain look sick. If you see a raccoon outside when it’s light out, and it looks agile, alert, is running or foraging in a smooth and coordinated manner, then you can be almost certain that it doesn’t have rabies. This doesn’t mean you should approach it and offer it a lick of your ice cream cone, but you most likely have nothing to worry about.

But the best advice is that should you see a raccoon, no matter what time of day, leave it alone. Never try to feed it or approach it. A raccoon out during the day may be foraging for food. For example, especially in urban locations, if you always put your trash out at 1 p.m. in the afternoon, raccoons will learn that. So, if you see one that is lingering in your yard, seems overly friendly, is acting unstable, etc., leave it alone, and contact your police or animal control officer. 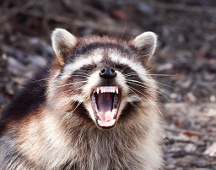 …but they can also be vicious.

Raccoons in general can be a nuisance, but caution should always be used around them. I once had one living under my garage. I set a Hav-a-Hart trap baited with cat food, and captured it within an hour and a half. But the tricky part was moving it to another location in the country. Frightened, it was very aggressive while in the cage, and I had to use a stick, with gloves on, in order to load it in the back of my SUV. Its claws were as sharp as razors and could have done some major damage to my hands when I tried to grab the handle. The release was successful, and the raccoon hurriedly waddled away. I don’t recommend this to just anyone.

As a matter of fact, my sister-in-law once tried using a broom to fend off a raccoon that had attacked her dog. The raccoon retaliated and bit her. The ‘coon ran off and was never found. So, because of the uncertainty of whether or not the raccoon was rabid, she had to undergo a series of painful shots. Although that incident is probably an isolated one, you never know how a raccoon will react. In this case, she probably didn’t have much choice because the raccoon had attacked her small dog. But it serves as an illustration of what can happen.

A very safe rule of thumb, quite simply, is if you see a raccoon, leave it alone, or contact a professional if you suspect that it is rabid.

The New England Patriots have appeared in the most Super Bowls with nine (5-4). Which two teams are second with eight?

Roland’s Trivia Question, Week of January 18, 2018 FOR YOUR HEALTH: How To Look Out For Your Lips This Winter
Scroll to top