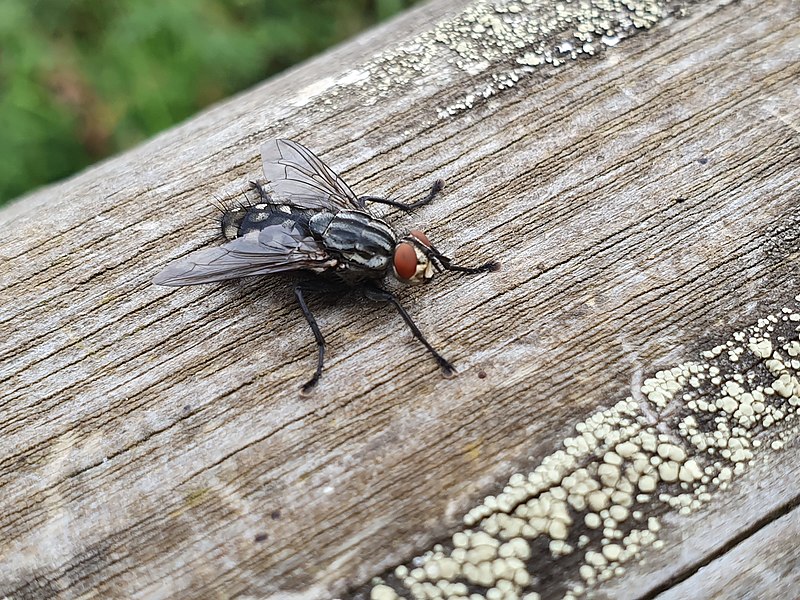 We all know, of course, that spring has arrived, at least according to the calendar. But there are many signs all around us. I have noticed some bushes, and even trees, have begun to bud.

But, this weekend, I saw my first house fly of the season.

The house fly, Musca domestica Linnaeus, is a well-known cosmopolitan pest of both farm and home. This species is always found in association with humans or the activities of humans. It is the most common species found on hog and poultry farms, horse stables and ranches. Not only are house flies a nuisance, but they can also transport disease-causing organisms. Excessive fly populations are not only an irritant to farm workers but, when there are nearby human habitations, a public health problem could occur.

This common fly originated on the steppes of central Asia – there’s Asia-borne pests in the news, again – but now occurs on all inhabited continents, in all climates from tropical to temperate, and in a variety of environments ranging from rural to urban. It is commonly associated with animal feces, but has adapted well to feeding on garbage, so it is abundant almost anywhere people live.

The house fly has a complete metamorphosis with distinct egg, larval or maggot, pupal and adult stages. The house fly overwinters in either the larval or pupal stage under manure piles or in other protected locations. Warm summer conditions are generally optimum for the development of the house fly, and it can complete its life cycle in as little as seven to ten days. However, under some conditions the life cycle may require up to two months. As many as 10 to 12 generations may occur annually in temperate regions, while more than 20 generations may occur in subtropical and tropical regions.

The house fly is about a quarter of an inch long, with the female usually larger than the male. The female can be distinguished from the male by the relatively wide space between the eyes (in males, the eyes almost touch).

Adults usually live 15 to 25 days, but may live up to two months. Without food, they survive only about two to three days. Longevity is enhanced by availability of suitable food, especially sugar. Access to animal manure does not lengthen adult life and they live longer at cooler temperatures.

The potential reproductive capacity of flies is tremendous, but fortunately can never be realized. Scientists have calculated that a pair of flies beginning reproduction in April may be responsible, under optimal conditions and if all were to live, for the production of 191,010,000,000,000,000,000 flies by August.

The flies are inactive at night, with ceilings, beams and overhead wires within buildings, trees, and shrubs, various kinds of outdoor wires, and grasses reported as overnight resting sites. In poultry ranches, the nighttime, outdoor aggregations of flies are found mainly in the branches, and shrubs, whereas almost all of the indoor populations generally aggregated in the ceiling area of poultry houses.

Of particular concern is the movement of flies from animal or human feces to food that will be eaten uncooked by humans. Also, when consumed by flies, some pathogens can be harbored in the mouthparts for several days, and then be transmitted when flies defecate or regurgitate. In situations where plumbing is lacking, such as open latrines, serious health problems can develop, especially if there are outdoor food markets, hospitals, or slaughter houses nearby. One of the pathogens commonly transmitted by house flies is Salmonella. These flies are most commonly linked to outbreaks of diarrhea and shigellosis, but also are implicated in transmission of food poisoning, typhoid fever, dysentery, tuberculosis, anthrax, ophthalmia, and parasitic worms.

The threshold density for determining when to control flies depends on the area where the control measures will be taken. In general, in homes the threshold is very low and control actions are taken with few flies. Tolerance of flies depends greatly on circumstances. In sensitive environments such as food preparation and packing facilities, restaurants, and hospitals, even small numbers of flies cannot be tolerated.

The more commonly used control measures for house flies are sanitation, use of traps, and insecticides, but in some instances integrated fly control has been implemented. The use of biological control in fly management is still at a relatively early stage.

Good sanitation is the basic step in any fly management program. Food and materials on which the flies can lay eggs must be removed, destroyed as a breeding medium, or isolated from the egg-laying adult. Since the house fly can complete its life cycle in as little as seven days, removal of wet manure at least twice a week is necessary to break the breeding cycle. Wet straw should not be allowed to pile up in or near buildings. Since straw is one of the best fly breeding materials, it is not recommended as bedding. Killing adult flies may reduce the infestation, but elimination of breeding areas is necessary for good management. Garbage cans and dumpsters should have tight-fitting lids and be cleaned regularly. Dry garbage and trash should be placed in plastic garbage bags and sealed. All garbage receptacles should be located as far from building entrances as possible.

The house fly is a nuisance. They just seem to have this knack of annoying you until you can’t stand it any more. That’s why, at camp in the summer, there is an ample supply of fly swatters available.

Outside of the New York Yankees, who have won 27 World Series, which MLB team has won the second most?