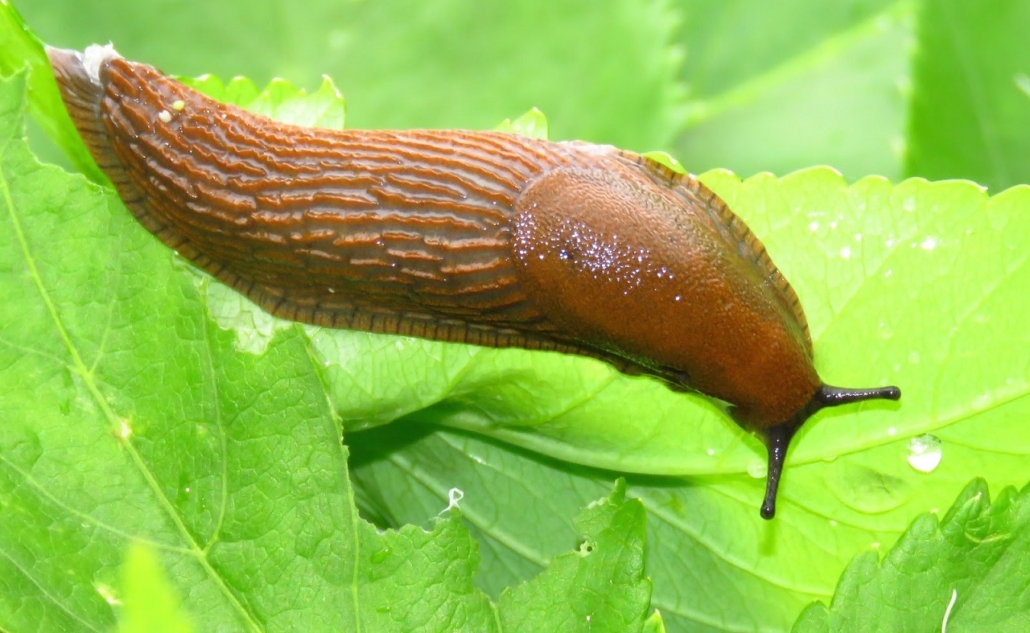 Over last weekend, I prepared my garden bed for planting, at camp. After tilling the soil, adding some manure, and carefully working everything into the soil, I moved a few containers from one location to another, and there it was. A slug!

I can remember, about four years ago, when slugs were raising havoc with my sweet peppers and Brussels sprouts, and were having a field day with my Romaine lettuce. In 2015, they were responsible for the complete destruction of my cucumber, green peppers and marigold plantings at camp. There seems to be no end to them. That raised the question: what are slugs, what are their usefulness and how do we get rid of them?

First of all, let’s find out a little bit about them.

Slug is a common non-scientific word, which is often applied to any gastropod mollusc, and the word “slug” is more frequently encountered as applied to air-breathing land species, including a few agricultural and horticultural pest species.

Land slugs, like all other slow-moving gastropods, undergo torsion (a 180-degree twisting of the internal organs) during development. Internally, the anatomy of a slug clearly shows the effects of this rotation, but externally the bodies of slugs appear rather symmetrical.

The soft, slimy bodies of slugs are prone to dry up (desiccation), so land-living slugs are confined to moist environments and are forced to retreat to damp hiding places when the weather is dry.

Slugs macerate (soften or separate food in the digestive tract by soaking) food using their radula, a rough, tongue-like organ with many tiny tooth-like denticles.

Like other snails, a slug moves by rhythmic waves of muscular contraction on the underside of its foot. It simultaneously secretes a layer of mucus on which it travels, which helps prevent damage to the tissues of the foot.

Slugs produce two types of mucus: one which is thin and watery, and another which is thick and sticky. Both kinds of mucus are hygroscopic (absorb and retain moisture). The thin mucus is spread out from the center of the foot to the edges, whereas the thick mucus spreads out from front to back. They also produce thick mucus which coats the whole body of the critter.

Slugs’ bodies are made up mostly of water, and without a full-sized shell to retreat into, their soft tissues are prone to desiccation.

Slugs are hermaphrodites, having both female and male reproductive organs. After mating, the slugs lay around 30 eggs in a hole in the ground, or beneath the cover of objects such as fallen logs.

Mostly, slugs are harmless to humans and to their interests, except for a small number of species of slugs that are great pests of agriculture and horticulture. They feed on fruits and vegetables prior to harvest, making holes in the crop, which can make individual items unsuitable to sell for aesthetic reasons, and which can make the crop more susceptible to rot and disease. 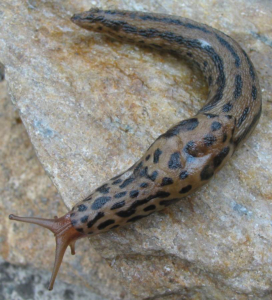 I don’t know if you’ve noticed, but so far I haven’t mentioned any benefits to the ecosystem. Their only contribution seems to be the fact they eat dead leaves, fungus and decaying vegetable material. It has always been my belief that if you allowed those to decompose, they will turn to dirt. Why do the slugs have to eat them?

Frogs, toads, snakes, hedgehogs, salamanders, eastern box turtles and certain birds and beetles are slug predators. Birds include blackbirds, crows, ducks, jays, owls, robins, seagulls, starlings and thrushes. With the large number of crows we have around our camp, I can’t figure out why they haven’t wiped out the slug population.

I also have seen numerous frogs and toads in my garden which might be helping with the fact the slugs have not attacked my tomatoes. Snakes, which are a no-no as far as I’m concerned are allowed to stay. However, those sightings have been few and far in between, partly due, I think, to the large number of raptors in the area.

Just so you know there are different kinds of slugs, Around my garden, at home, especially near the wood pile, I have seen great gray slugs, which almost resemble a small snake. Snakes are something I tolerate, but for which I have no love.

So, as you can see, slugs are a pest, they are disgusting, and they serve very little purpose in our environs.

Roland’s Trivia Question for Thursday, May 28, 2020 GARDEN WORKS: Exciting times in the garden
Scroll to top