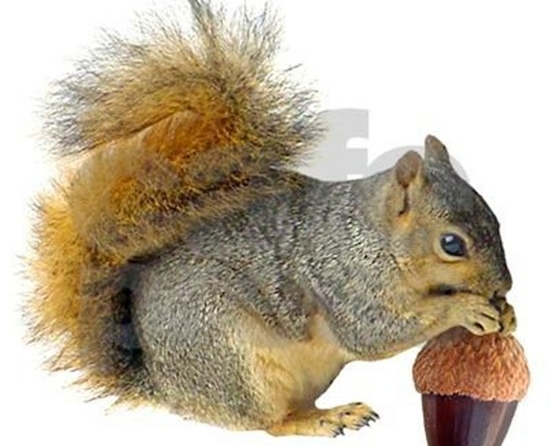 While preparing breakfast last Saturday, I glanced out the kitchen window towards my recently cleaned up garden plot. As I looked around I noticed some movement, and commented to my wife: “I think I have a title for a new country song, ‘There’s a squirrel in the compost pile.’”

Anyway, that prompted me to ask myself what could be in the compost that would interest a squirrel. After all, it has nothing more than plant stems, vines from squashes and various roots and stalks. There were a few tiny, fledgling fruits from these items that didn’t have a chance to mature, but that would be it.

Then my mind rewound to the recently closed down camp, and the food sources out there. Nearby there is a large oak tree and a mature, but fairly young beech tree. Most of you have probably heard acorns when they fall from the trees, and land on something substantive. They sound like gunfire, exploding bombs or branches falling. They make quite a loud noise. The presence of Beech nuts, on the other hand, are hardly even noticeable.

Acorns are too heavy for wind dispersal, so the spreading of the seed is dependent on animals like the squirrels who cache the nuts for future use. Squirrels scatter-hoard the acorns in a variety of locations in which it is possible for them to germinate and thrive. On occasion, the odd acorn may be lost, or the squirrel may die before consuming all the acorns it has stored. A small number of acorns may germinate and survive, producing the next generation of oak trees.

As far as humans go, acorns have frequently been used as a coffee substitute. The Confederates in the American Civil War and the Germans during World War II, which were cut off from coffee supplies by Union and Allied blockades, respectively, are particularly notable past instances of this use of acorns.

As far as the beech nuts go, again going back to camp and the beech tree near our site, there doesn’t seem to be much activity by squirrels in the area of the tree. Of course, the beech nut seems to defy gravity. It is a small nut with soft-spined husks. Although it is high in tannin content, they are bitter. The nut can be extracted by peeling back the husk, but your fingers may hurt dealing with the spines. Maybe that is why they are not that attractive to squirrels.

On a different note, slats of Beech wood are washed in a caustic soda to leach out any flavor and is used in the bottom of fermentation tanks for Budweiser beer. This allows a surface for the yeast to settle, so that it doesn’t pile up too deep. Beech is also used to smoke Westphalian ham, various sausages and some cheeses.

With the World Series going past October in recent years, who was the first MLB player to hit a home run in November?