A reader called the office last week to inquire about a bug that resembles a ladybug, but is green in color. She was wondering if it was a pumpkin bug. Well, it very well could be. 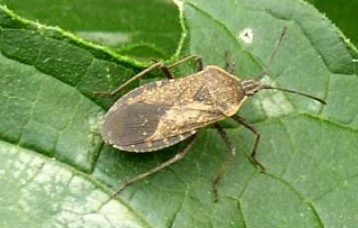 The squash bug, Anasa tristis, is common throughout the United States. It primarily attacks squash and pumpkins but can also attack other cucurbits, such as cucumbers.

They are the bane of a gardener. They are difficult to kill and can cause a lot of havoc.

The adult bugs are somewhat flat, large insects, measuring 5/8 inch long and 1/3 inch wide. They are usually dark gray to dark brown. The edges of the abdomens protrude beyond their wings and typically have alternating orangish and brown stripes. They are able to fly, however they often simply walk around on plants.

These bugs overwinter as adults in sheltered places, such as under plant debris, around buildings, or under rocks. When adults emerge in the spring, they fly to growing cucurbit plants to feed and mate. Females lay eggs individually in small clusters of about 20 commonly on the undersides of the leaves, especially between the veins where they form a V. The females usually begin to appear in gardens in early June, and continue to lay eggs through mid-summer.

These bugs have piercing-sucking mouth-parts they use to suck the sap out of leaves. This process produces yellow spots that eventually turn brown, and disrupts the flow of water and nutrients, which can cause wilting. Young plants are more susceptible to extensive damage. Larger, more vigorous plants are more tolerant of feeding damage, although they can also be injured or killed if they are severely attacked.

These bugs inject a toxin into the plant and suck the sap right out of it with their sharp mouthparts. This causes yellow spots that eventually turn brown. The leaves will wilt because the damage prevents the flow of nutrients to the leaves, and then they will dry up and turn black.

Remove or knock off and kill nymphs and adults by dropping them into a bucket of soapy water. This can be challenging because the bugs hide under leaves and move quickly when disturbed.

Crush the eggs that are attached to the undersides and stems of leaves.

Trap the bugs by laying out boards or pieces of newspaper. The bugs will congregate under the boards at night, and then can be collected and destroyed in the morning.

Check your plants daily. If there are no more than a few vines infected, keep collecting and destroying the bugs and crushing the egg clusters that you find.

Insecticides are not generally needed to control these bugs. They can be used if cucurbits are found wilting early in the season. Carbaryl/Sevin is most effective if applied when eggs are hatching. Consult your local garden center for controls that are locally approved. When using an insecticide, make sure to read the instructions well.

Planting time is approaching. Make sure your garden is free of these little pests. There is no worse feeling than seeing your plants being destroyed and you have no idea what is causing it. Check under the leaves.

In addition to pitching a one-hitter in game two of the 1967 World Series, who became the first Red Sox pitcher to win the AL Cy Young Award in 1967?