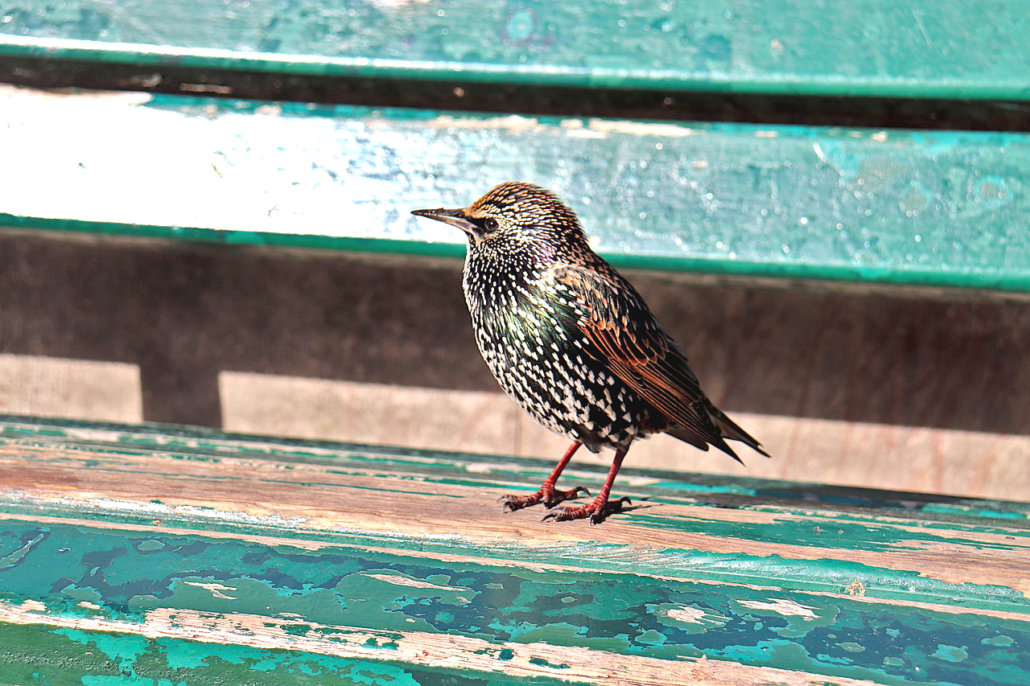 Last week while while doing some work in my backyard, specifically, dealing with the compost bin following the winter, spreading fertilizer in the garden, pruning my black raspberry bushes, and just doing some general clean up, I noticed a flock of starlings in a bush in the corner of my property. I had seen them before, but it seemed a little early for them.

The common starling, Sturnus vulgaris, also known as the European starling, or in the British Isles just starling, is a medium-sized bird about eight inches long and has glossy black plumage with a metallic sheen, which is speckled with white at some times of year. The legs are pink and the bill is black in winter and yellow in summer; young birds have browner plumage than the adults. It is a noisy bird, especially in communal roosts and other gregarious situations, with an unmusical but varied song. Its gift for mimicry has been noted in literature including the Mabinogion and the works of Pliny the Elder and William Shakespeare.

The common starling has about a dozen subspecies breeding in open habitats across its native range in temperate Europe and western Asia, and it has been introduced to Australia, New Zealand, Canada, United States, Mexico, Peru, Argentina, the Falkland Islands, Brazil, Chile, Uruguay, South Africa and Fiji.

Large flocks typical of this species can be beneficial to agriculture by controlling pests; however, starlings can also be pests themselves when they feed on fruit and sprouting crops. Common starlings may also be a nuisance through the noise and mess caused by their large urban roosts. The species has declined in numbers in parts of northern and western Europe since the 1980s due to fewer grassland invertebrates being available as food for growing chicks. Despite this, its huge global population is not thought to be declining significantly, so the common starling is classified as being of least concern by the International Union for Conservation of Nature. The European starling ranks third, behind only the red-winged blackbird and the American robin, as the most abundant species in North America.

After two failed attempts, about 60 common starlings were released in 1890 into New York’s Central Park by Eugene Schieffelin. He was president of the American Acclimatization Society, which tried to introduce every bird species mentioned in the works of William Shakespeare into North America. About the same date, the Portland Song Bird Club released 35 pairs of common starlings in Portland, Oregon. These birds became established but disappeared around 1902. Common starlings reappeared in the Pacific Northwest in the mid-1940s and these birds were probably descendants of the 1890 Central Park introduction. The original 60 birds have since swelled in number to 150 million, occupying an area extending from southern Canada and Alaska to Central America.

The global population of common starlings was estimated to be 310 million individuals in 2004, occupying a total area of 3,420,000 square miles.

A majority of starling predators are avian. Their ability in flight are seldom matched by birds of prey. Adult common starlings are hunted by hawks. Slower raptors tend to take the more easily caught fledglings or juveniles. While perched in groups by night, they can be vulnerable to owls, including the little owl.

Common starlings introduced to areas such as Australia or North America, where other members of the genus are absent, may have an impact on native species through competition for nest holes. In North America, chickadees, nuthatches, woodpeckers, purple martins and other swallows may be affected. For its role in the decline of local native species and the damages to agriculture, the common starling has been included in the IUCN List of the world’s 100 worst invasive species.

Common starlings can eat and damage fruit in orchards such as grapes, peaches, olives, currants and tomatoes or dig up newly-sown grain and sprouting crops. They may also eat animal feed and distribute seeds through their droppings, which is how I think I got my patch of black raspberries in my garden area. I never had them before, but they showed up about eight years ago. Agricultural damage in the U.S. is estimated as costing about $800 million annually. This bird is considered to be damaging to agriculture the United States.

The large size of flocks can also cause problems. Common starlings may be sucked into aircraft jet engines, one of the worst instances of this being an incident in Boston in 1960, when 62 people died after a turboprop airliner flew into a flock and plummeted into the sea at Winthrop Harbor.

Starlings’ droppings can contain the fungus Histoplasma capsulatum, the cause of histoplasmosis in humans. At roosting sites this fungus can thrive in accumulated droppings. There are a number of other infectious diseases that can potentially be transmitted by common starlings to humans, although the potential for the birds to spread infections may have been exaggerated.

The common starling’s gift for mimicry has long been recognized. In the medieval Welsh Mabinogion, Branwen tamed a common starling, “taught it words,” and sent it across the Irish Sea with a message to her brothers, Bran and Manawydan, who then sailed from Wales to Ireland to rescue her. Pliny the Elder claimed that these birds could be taught to speak whole sentences in Latin and Greek, and in Henry IV, William Shakespeare had Hotspur declare, “The king forbade my tongue to speak of Mortimer. But I will find him when he is asleep, and in his ear I’ll holler ‘Mortimer!’ Nay I’ll have a starling shall be taught to speak nothing but Mortimer, and give it to him to keep his anger still in motion.”

Mozart had a pet common starling which could sing part of his Piano Concerto in G Major (KV. 453). He had bought it from a shop after hearing it sing a phrase from a work he wrote six weeks previously.

After all of this, I wonder where the starling fits in our ecosystem. Is it beneficial, is it destructive to agriculture, is it a carrier of disease, or is it smart enough to learn Mozart? Whatever the outcome, I hope the black raspberries make it to fruition.

What manager led the Boston Red Sox to their first championship in 86 years in 2004?