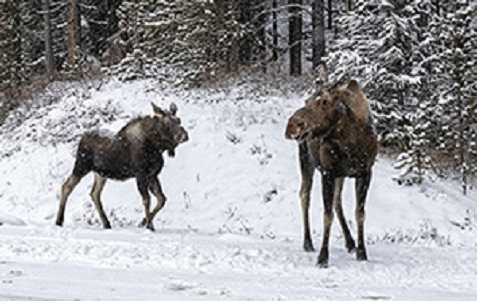 Photo courtesy of the Maine Department of Inland Fisheries and Wildlife

The moose hunting season was reintroduced in 1980 on an experimental basis, when 700 permits were issued to residents. At that time, the Maine Department of Inland Fisheries & Wildlife estimated the moose population to be in the vicinity of 20,000 – 25,000 animals. In 2007, a wildlife ecologist estimated the moose population for New England and New York to be in the range of 50,000 animals.

A campaign was began in 1983 by a group of moose lovers to place the moose hunting question on a referendum ballot. The initiative failed. The legislature subsequently gave the DIF&W the authority to establish the number of moose permits handed out each year, while maintaining control of the moose lottery.

In 2002, for the first time in 21 years, state wildlife biologists recommended reducing the number of permits, for fear that the moose population may have been on the decline. There had been a high level of calf mortality with the culprit possibly being the tiny blood-sucking ticks that have become so numerous in recent years. Ticks killed more than half the moose calves in northern New Hampshire during a peak year. It was feared the same was happening in Maine.

Lee Kantar, state moose biologist with the Maine Department of Inland Fisheries and Wildlife, stated, “the moose herd is dynamic. While young calves trying to make it through to their first birthday each May suffer from winter ticks that can be debilitating, in the core moose range generally from the Moosehead Region to the Canadian border, moose are abundant. But winter ticks depress reproduction in adult females and combined with moderate to severe overwinter mortality of calves in many years, annual population growth can become stagnant or decline with sporadic increases when annual winter tick levels ease.”

There were 4,030 permits issued this year including the 550 issued specifically for this year’s initial Adaptive (experimental) hunt to reduce moose densities in order to determine whether that can aid in breaking the debilitating impacts of the winter tick cycle.

The moose vanished in much of the eastern U.S. for as long as 150 years, due to colonial era overhunting and destruction of habitat.

Who was the last Red Sox player to be named World Series MVP?