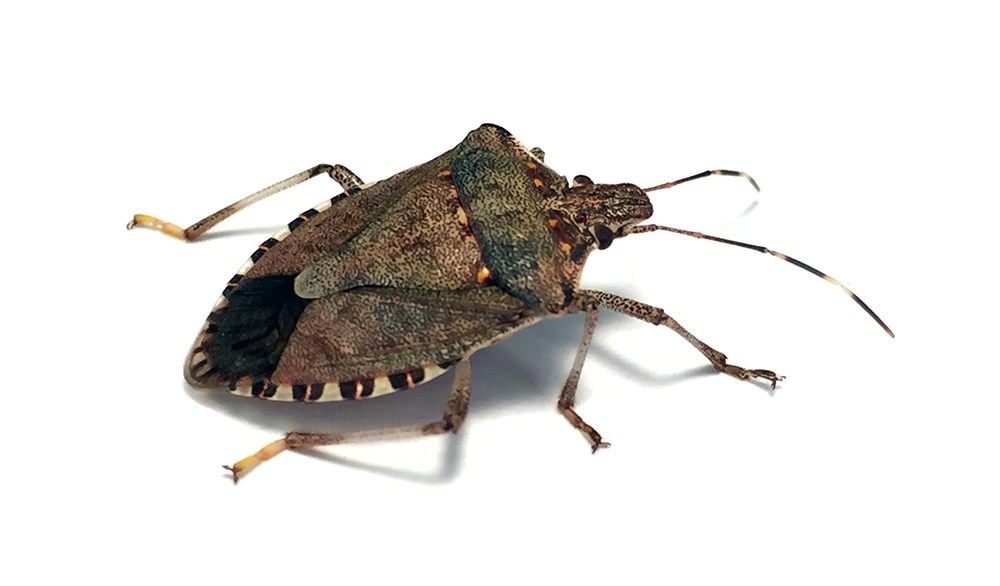 They seem to have invaded our environment and taken up permanent residence in the state of Maine. We are seeing more and more of them in and around our homes. More so this time of year when the critters are attempting to come indoors where its warm. They are commonly known as stink bugs.

The brown marmorated stink bugs are an invasive species and are considered a serious crop pest. They are notorious at attacking especially corn and potatoes. They were accidentally introduced in the United States from Asia. It is believed to have hitched a ride as a stow-away in packing crates or on various types of machinery. The first documented specimen was collected in Allentown, Pennsylvania, in 1996. It is now found in the eastern half of the U.S. as well as California, Oregon, Washington, Arizona, New Mexico and Texas.

Since arriving from Asia, the stink bug spread quickly from state to state, and is now listed as a top invasive species of interest by the U.S. Department of Agriculture (USDA) since 2013. They spread quickly due to their ability to lay more than 100 eggs each spring and summer. The USDA now reports the stink bug can be found in 44 states.

It is easily identifiable by its brown color, six legs, shield-like pattern on its shell, white segments on its antennas and the cilantro-like smell it emits when scared or crushed.

The stink bug gets its name because it releases an odor when disturbed or when crushed. They will emit a foul-smelling chemical when they are injured, startled or attacked.

Generally, adult stink bugs feed on fruits, while nymphs will dine on leaves, stems and fruit. Stink bugs eat peaches, apples, peppers, soybeans, tomatoes, grapes and others. According to USDA records, the stink bug caused farmers to lose $31 million in 2010, which is the most up-to-date figures available. Their ability to possibly spread throughout the country has the agricultural community nervous.

In the fall, they search for sites to avoid the winter weather. They re-emerge in early spring and become active. During the warmer summer months, they can be found congregating en masse on the sides of buildings. Stink bugs have a life expectancy of nine to 10 months.

They enter homes through windows, cracked foundations, dryer vents and door jambs. Once inside, they seek refuge in warm places, like insulated walls. It is not uncommon to find thousands of them inside a house.

Stink bugs are not poisonous to humans and do not normally bite. Although native stink bug species exist in the U.S., none have caused damage to crops and invaded homes in numbers like the brown marmorated stink bug. However, some people are allergic to the marmorated stink bug, with reactions that include eye watering, congestion and coughing.

Stink bugs present no known danger of damaging the home, however, large amounts of dead stink bugs in the walls of the home can attract carpet beetles, which eat wool. That may explain why, all of a sudden, some of your clothes hanging in closets have developed holes.

To prevent stink bugs from entering homes and buildings, seal cracks around windows, doors, siding, utility pipes, behind chimneys and underneath the wood fascia and other openings. Use a good quality silicone or silicone-latex caulk. If you need to remove stink bugs already established in the home, a vacuum cleaner can aid in the removal. However, make sure to empty the vacuum cleaner outdoors after using to avoid the odor that will probably permeate throughout the house from disturbing the bugs.

Although studies are being conducted on how to handle the growing problem, farmers don’t currently have too many options. Pesticides that are used for other bugs can work, however, unless the pesticide hits the bug directly, it won’t make much of different in the stink bug population.

The Maine Department of Agriculture, Conservation and Forestry asks anyone who finds a stink bug to take a picture and fill out an online survey. That could be a cumbersome project.

I have not seen any marmorated stink bugs in my home, but I have seen many around homes of family and friends, especially those residing in rural areas. Most merely dismiss it as nothing more than a nuisance and simply deal with them one at a time, as they appear.

What else can you do?

Who is the New England Patriots all time leading rusher?