Several years ago – there seems to be disagreement when it was – we had an Eastern phoebe build a nest under the awning, on a cross beam that abuts our camp. We watched as the female incubated the eggs, and my wife had the opportunity to witness the last of the chicks leave the nest.

Well, I think it’s about to happen again, and to quote the late, great Yogi Berra, “it’s déja vu all over again!” We noticed an Eastern phoebe hanging around last Sunday when we went to camp to assess the winter damage and begin the clean up. She seemed to be scoping out the area for a potential site for a nest.

In the past, the female arrived and began building the nest sometime after May 1. When we moved out to camp for the summer on May 9, the nest was about half complete. Even with the increase in traffic, the bird continued on its mission of finishing the task it had begun, despite the fact that the nest was about two feet from the door to the camp, in the exact location the other bird had chosen a few years back. 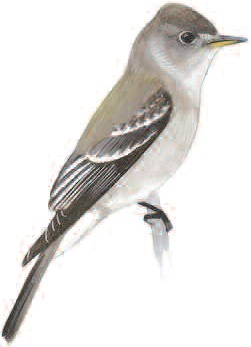 There were four eggs in the nest. We determined this by taking a mirror, placing it on a stick and looking inside the nest. The female, at that point, would leave the nest every time the door opened. They were all phoebe eggs. The Eastern phoebe is occasionally host to the nest-parasitic brown-headed cowbird.

As the incubation period approached its end, she was a little more reluctant to leave the nest unattended. She was more tolerant of our presence and did not leave the nest after sunset, regardless of the commotion that was going on around her.

Returning north at the beginning of spring, sometimes before the snow has left, these early arrivals are unmistakable. They pump their tails up and down, as only phoebes can. They have remarkably large heads, and the straight-up feathers on their heads are far too short to make a respectable crest.

In inhabited areas, the phoebes like to build their nests under bridges, porches, eaves and sheds. They will practically move in on favored homeowners – which I suppose is what we became – who may then be lucky enough to watch the construction of their moss and mud nests, the hatching of the eggs, the feeding of the young, and finally the fledgling of the brood as they take their first awkward flights, all things that we have been fortunate enough to observe.

Phoebes will frequently return to the same nest sites year after year, which we have discovered.

Although only the female incubates the eggs, both parents share in the feeding of the young. They generally will raise two broods a year, sometimes three. In our case, the last experience with them was only one brood, because we deduced that because of the many times she leaves the nest in our presence, it may take longer than the customary 14-17 days to incubate.

The young will leave the nest approximately two weeks after hatching.

The nest is an open cup with a mud base (makes a mess on the windows) and lined with moss and fine grass stems and hair.

Although the book on the phoebes indicate they are loners, and that even during egg laying the female will chase away the male, the pair that we have stay close. While the female is in the nest, the male is never too far away. We witnessed the male attack a Baltimore Oriole that had landed on the edge of the roof, eight feet away from the nest.

When we go back to camp this weekend, we will try to find if the phoebe has found a place to nest. The beam that once was home for these birds is no longer there. I’ll keep an eye on the outbuildings.