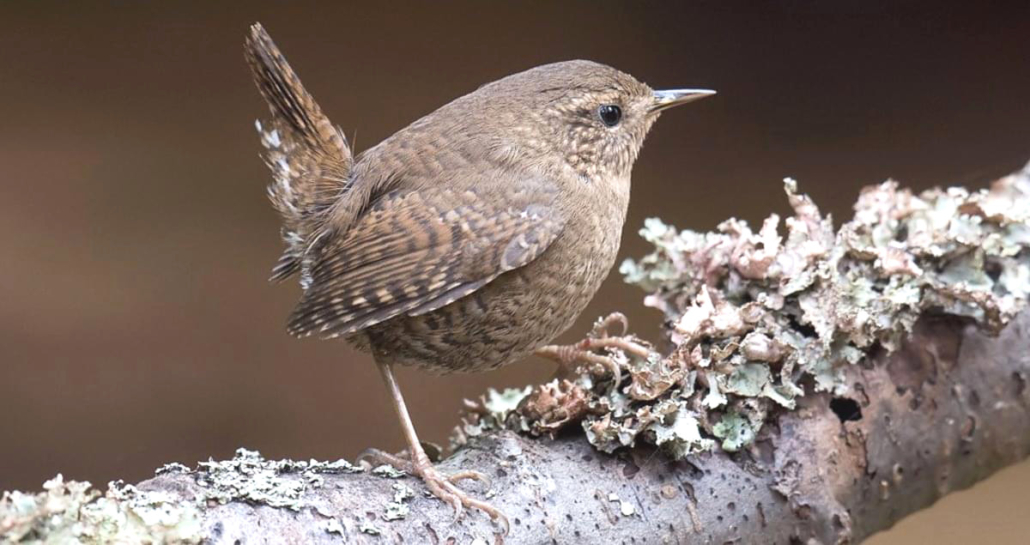 There are times at camp, especially when the weather is oppressingly hot, that my wife and I will retreat to our gazebo, that sits under shade trees, turn on the fan, and enjoy whatever is around us.

Recently, actually since the beginning of summer, we have noticed a Winter Wren that is hanging around our camp. Now, I don’t know if there are more than one, or just the one. We have not seen two together. It has a pretty little song and we enjoy listening to it in the morning.

Another recent visitor, that we don’t remember ever seeing before, is the Hermit Thrush. Another small, brownish bird with a melodious song.

While sitting in the gazebo, we started to talk about the two birds. So, to compare the two songs, we each took our respective cell phones, and Googled the birds. She the hermit thrush, I the winter wren.

To our surprise, when we played their respective songs, to compare them, we became surrounded by the two different birds, and they were answering our calls. We did it a couple of times, then decided that we were possibly confusing the real birds. So we stopped.

However, the birds in the trees continued to call out for quite some time.

The Winter Wren, Troglodytes hiemali, is a very small North American bird. It breeds in coniferous forests from British Columbia to the Atlantic Ocean. It migrates through and winters across southeastern Canada, the eastern half of the United States and (rarely) northeastern Mexico. Small numbers may exist in the western United States and Canada.

The scientific name is taken from the Greek word troglodytes (from “trogle,” a hole, and “dyein,” to creep), meaning “cave-dweller,” and refers to its habit of disappearing into cavities or crevices while hunting arthropods or to roost.

They have small tails often cocked above its back, and short neck which gives the appearance of a small brown ball. Rufous brown above, grayer below, barred with darker brown and gray, even on wings and tail. The bill is dark brown, the legs pale brown. Young birds are less distinctly barred. Most are identifiable by the pale “eyebrows” over their eyes.

The Winter Wren nests mostly in coniferous forests, especially those of spruce and fir, where it is often identified by its long and exuberant song. Although it is an insectivore, it can remain in moderately cold and even snowy climates by foraging for insects on bark and fallen logs.

Its movements as it creeps or climbs are incessant rather than rapid; its short flights swift and direct but not sustained, its tiny round wings whirring as it flies from bush to bush.

At night, usually in winter, it often roosts, true to its scientific name, in dark retreats, snug holes and even old nests. In hard weather it may do so in groups, either consisting of the family or of many individuals gathered together for warmth.

For the most part insects and spiders are its food, but in winter large pupae and some seeds are taken. 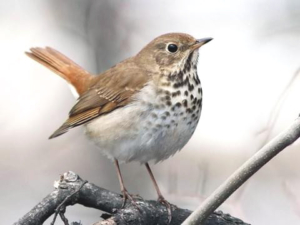 The Hermit Thrush, Catharus guttatus, is a medium-sized North American thrush. It is more compact and stockier than other North American thrushes, with relatively longer wings. The hermit thrush has the white-dark-white underwing pattern characteristic of Catharus thrushes. Adults are mainly brown on the upperparts, with reddish tails. The underparts are white with dark spots on the breast and gray or brownish flanks. They have pink legs and a white eye ring. Birds in the east are more olive-brown on the upperparts; western birds are more gray-brown.

Hermit Thrushes breed in coniferous or mixed woods across Canada, southern Alaska, and the northeastern and western United States. They make a cup nest on the ground or relatively low in a tree.

While most hermit thrushes migrate to wintering grounds in the southern United States and south to Central America, some remain in northern coastal U.S. states and southern Ontario. They usually breed in forests, but will sometimes winter in parks and wooded suburban neighborhoods. They forage on the forest floor, also in trees or shrubs, mainly eating insects and berries.

The Hermit Thrush’s song has been described as “the finest sound in nature,” consisting of a beginning note, then several descending musical phrases in a minor key, repeated at different pitches. It often sings from a high open location. Analysis of the notes of its song indicates they are related by harmonic simple integer pitch ratios, like many kinds of human music and unlike the songs of other birds that have been similarly examined.

Walt Whitman construes the Hermit Thrush as a symbol of the American voice, poetic and otherwise, in his elegy for Abraham Lincoln, “When Lilacs Last in the Dooryard Bloom’d,” one of the fundamental texts in the American literary canon. A Hermit Thrush is the name of a poem by the American poet Amy Clampitt. A hermit thrush appears in the fifth section (What the Thunder Said) of the T. S. Eliot poem The Waste Land.

Former Canadian indie-rock band Thrush Hermit took its name from a reversal of the bird’s name. It is also shared by the American bands Hermit Thrushes and Hermit Thrush.

Who are the three pitchers with 100 or more career losses with the Red Sox?