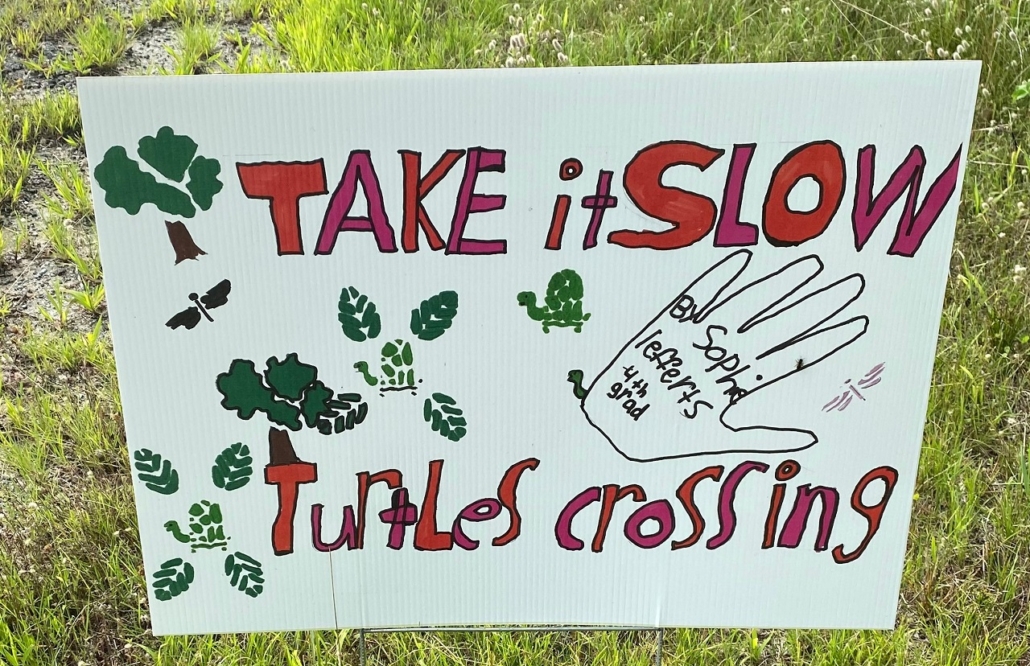 “It’s that time of year, again.” Probably one of the most over used phrases in the English language, and one that I loathe to hear. Why? Because when you come right down to it, everyday is that time of year for something. Anyway, here we go.

It’s that time of the year again when snapping turtles appear everywhere to lay their eggs. Just this past week I have seen at least a half dozen snappers on the side of the road; saw one person stop to help it across the road, and I myself have done it once on the Nelson Road, in Vassalboro.

And, two concientious young citizens, Bella and Sophie Lefferts, have created and placed signs along a stretch of Village Street, in South China, proclaiming, “Take it Slow, Turtles Crossing.”

Snapping turtles, Chelydra s. serpentina, range across the eastern United States to the Rocky Mountains, from southern Canada to the Gulf of Mexico, and into Central America. 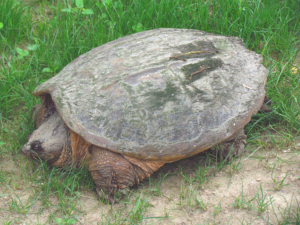 The snapping turtle can be easily recognized by its dark upper shell with a deeply serrated back margin, and a small bottom shell that does not completely cover all of the animal’s flesh. The upper shell can measure between 8 – 12 inches in length on average in adults, and it can weigh between 10-35 pounds. These turtles have long tails, often measuring as long or longer than the shell, and is covered with bony plates. They also have a large head, long neck, and a sharp, hooked upper jaw. This hard beak has a rough cutting edge that is used for tearing food.

Once turtles mature and their shell hardens, they are virtually predator-free.

If you see a snapping turtle crossing the road, and decide to help it out, always make sure you relocate it on the side of the road in which it was headed. If not, it will only try to cross the road again. It’s obviously headed in a direction that is important to it. Always use caution when picking one up. Place your thumbs in the center of the upper shell, and the rest of your hand on its stomach. Be careful not to make contact with its mouth. It could be painfully uncomfortable if it were to bite you.

Never use a broom or shovel to help it along, as you could injure the turtle.

The female turtle will lay eggs in sandy, soft soil between April and November, depending on its location. In our area, they usually lay their eggs in May and June. That is why the shoulder of a road looks inviting to them. Be on the lookout, and try to avoid the nest. The female will generally lay between 10 and 50 eggs, and they take three to four months to hatch. Interestingly, eggs incubated at 68 degrees will produce only females; eggs maintained at 70-72 degrees will produce both male and female and those incubated at 73-75 degrees produce only males.

The female will dig a nest, lay the eggs, using her back feet to position them, and then bury the clutch. That makes the nest extremely vulnerable, and is usually a target for raccoons who consider the turtle eggs a delicacy. Skunks, crows, dogs and other mammals are also culprits. It is estimated that up to 90 percent of the nests are destroyed by predators. Countless turtles are also killed or injured on roads during their terrestrial treks. Despite this high rate of mortality, snapping turtles are not endangered, although some states have placed a ban on harvesting them.

The Maine Department of Inland Fisheries and Wildlife (MDIF&W) has voted to outlaw the commercial harvest of snapping turtles. It was urged by then-Commissioner Lee Perry to support the ban, to ensure the sustainability of snappers, which don’t breed until 20 years of age in the north. “While I have no reason to believe that snapping turtles are threatened with extinction in Maine, there is reason to be concerned about the viability of the population,” he said.

Snapping turtles typically live until between 20 and 50 years of age in captivity, although records are poor as to the actual longevity of turtles in the wild. Some studies have indicated that snapping turtles can live well over 100 years.

However, turtles are not innocent victims. They may cause depredation at privately-owned ponds, fish farms, or waterfowl sanctuaries and control methods may be warranted. They will feed on plants, insects, spiders, worms, fish, frogs, small turtles, snakes, birds, crayfish, small mammals and carrion.

It’s important to be on the lookout for turtles this time of year. By driving defensively and keeping alert to conditions on the road, motorists should be able to avoid hitting a turtle.

Have you ever heard the riddle, “If a turtles leaves its shell, is it naked or homeless?”

Well, the answer is: it is not possible for a turtle to “lose” its shell. Their shell is part of them just as much as our skeleton is a part of us. The turtle is connected to its shell through its nerves, skin, ribs, and spinal cord.

I guess you learn something everyday.

What do the “away” jerseys of the Boston Red Sox say on the front, Boston or Red Sox?