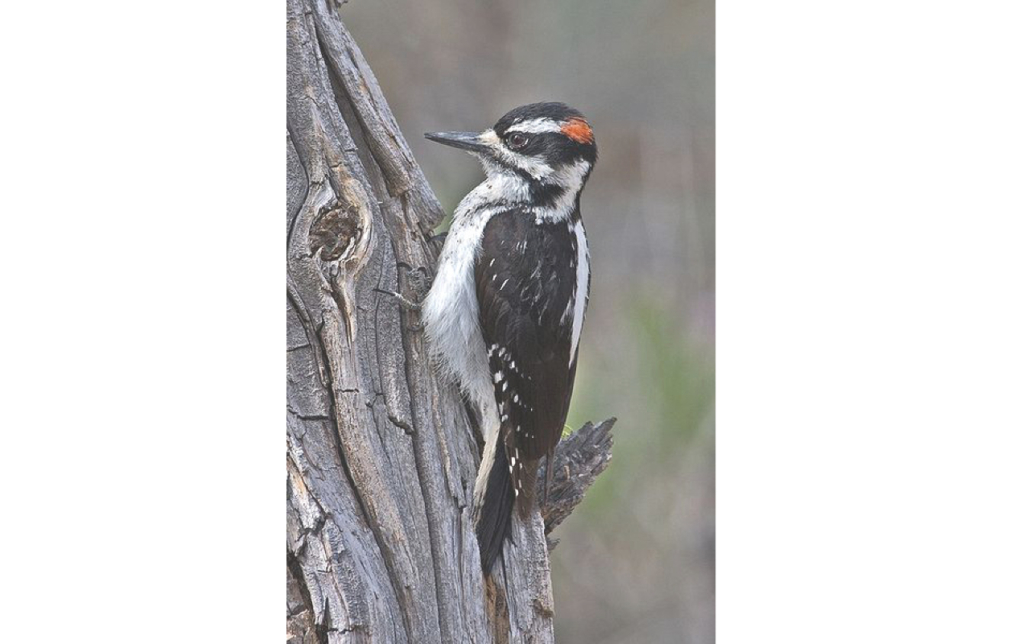 One of the things I enjoy doing at camp on a Saturday morning is grabbing a cup of coffee and sitting on my deck, focusing on the bird feeders. There is much activity around there, not just the birds, but the squirrels and chipmunks, and the occasional cat that comes around to harass the wildlife.

On a recent Saturday, I watched two hairy woodpeckers in particular – one male, one female.

I didn’t notice at first, but after a while it became evident the male, which was perched on a suet cake, would fill its mouth, fly down to the female that was sitting on a tree stump nearby, and transferring the food to her.

What a nice thing to do, I thought. The male providing for the female – I’m not being sexist here. Actually, upon closer observation, the female would then fly off into the woods, and return a short time later. This occurred over and over, again.

My deduction at that time was the female was, in turn, returning to the nest to feed the young. Adults regurgitate and insert food in the mouths of the very young. Food is transferred from adult to older offspring through open beaks with heads at an angle.

The hairy woodpecker, Euconotopicus villosus, is a medium-sized woodpecker that is found over a large area of North America. It is approximately 9-3/4 inches in length with 15-inch wingspan. With an estimated population in 2003 of over nine million individuals, the hairy woodpecker is listed by the International Union for Conservation of Nature (IUCN) as a species of least concern.

The hairy woodpecker was described and illustrated with a hand-coloured plate by the English naturalist Mark Catesby in his The Natural History of Carolina, Florida and the Bahama Islands which was published between 1729 and 1732. When in 1766 the Swedish naturalist Carl Linnaeus updated his Systema Naturae for the twelfth edition, he included the downy woodpecker, coined the binomial name Picus villosus and cited Catesby’s book.

The specific epithet “villosus” is the Latin word for “hairy”. Linnaeus specified the type locality as North America, with specific mention of Raccoon, New Jersey.

Adults are mainly black on the upper parts and wings, with a white or pale back and white spotting on the wings; the throat and belly vary from white to sooty brown. There is a white bar above and one below the eye. They have a black tail with white outer feathers. Adult males have a red patch or two side-by-side patches on the back of the head; juvenile males have red or rarely orange-red on the crown.

They have a somewhat soldierly look, with their erect, straight-backed posture on tree trunks and their cleanly striped heads. Look for them at backyard suet or sunflower feeders, and listen for them whinnying from woodlots, parks, and forests.

More than 75 percent of the hairy woodpecker’s diet is made up of insects, particularly the larvae of wood-boring beetles and bark beetles, ants, and moth pupae in their cocoons. To a lesser extent they also eat bees, wasps, caterpillars, spiders, millipedes, and rarely cockroaches, crickets, and grasshoppers. A little more than 20 percent of their diet is made up of fruit and seeds. My wife usually gets suet cakes that contain fruit, seeds and nuts, thus attracting the hairy woodpeckers.

The hairy woodpecker is virtually identical in plumage to the smaller downy woodpecker. The downy has a shorter bill relative to the size of its head, which is, other than size and voice, the best way to distinguish them in the field. These two species are not closely related, however, and are likely to be separated in different genera. Another way to tell the two species apart is the lack of spots on its white tail feathers (present in the downy). Their outward similarity is a spectacular example of convergent evolution. As to the reason for this convergence, only tentative hypotheses have been advanced; in any case, because of the considerable size difference, ecological competition between the two species is slight.

The hairy woodpecker inhabits mature deciduous forests in the Bahamas, Canada, Costa Rica, El Salvador, Guatemala, Honduras, Mexico, Nicaragua, Panama, Saint Pierre and Miquelon, and the United States. It is a vagrant to Puerto Rico and the Turks and Caicos Islands. Mating pairs will excavate a hole in a tree, where they will lay, on average, four white eggs. Hairy woodpeckers are common in mature woodlands with medium to large trees.

These birds are mostly permanent residents. Birds in the extreme north may migrate further south; birds in mountainous areas may move to lower elevations.

These birds forage on trees, often turning over bark or excavating to uncover insects. They mainly eat insects, but also fruits, berries and nuts, as well as sometimes tree sap. They are a natural predator of the European corn borer, a moth that costs the U.S. agriculture industry more than $1 billion annually in crop losses and population control. They are also known to peck at wooden window frames and wood-sided homes that may house prey.

Courting birds stretch out their necks, point their bills high, and bob their heads from side to side, flicking their wings as they circle a tree trunk. They also sometimes chase each other in fast, looping flights through the trees.

The female probably selects the nesting site, but both sexes work alternately at the labor of excavating the cavity. This work requires one to three weeks, depending on how hard the wood is; a cavity in the soft wood of a poplar, which is a favorite with this species in some localities, might be excavated in a very short time. A new nest may often be recognized by the presence of fresh chips on the ground around the tree, as the birds are not very particular about removing them.

Both male and female incubate and brood the young. The male sits on the eggs and broods the young during the night and the female relieves him every morning after sunrise. They alternate these duties throughout the day. Incubation last about 11-12 days and the young leave the nest in about 28-30 days after hatching.

We continue to watch the hairy woodpeckers, and the downy, come and go at the feeders, but we haven’t seen the exchange of food recently. Maybe the fledglings are now old enough to go out on their own.