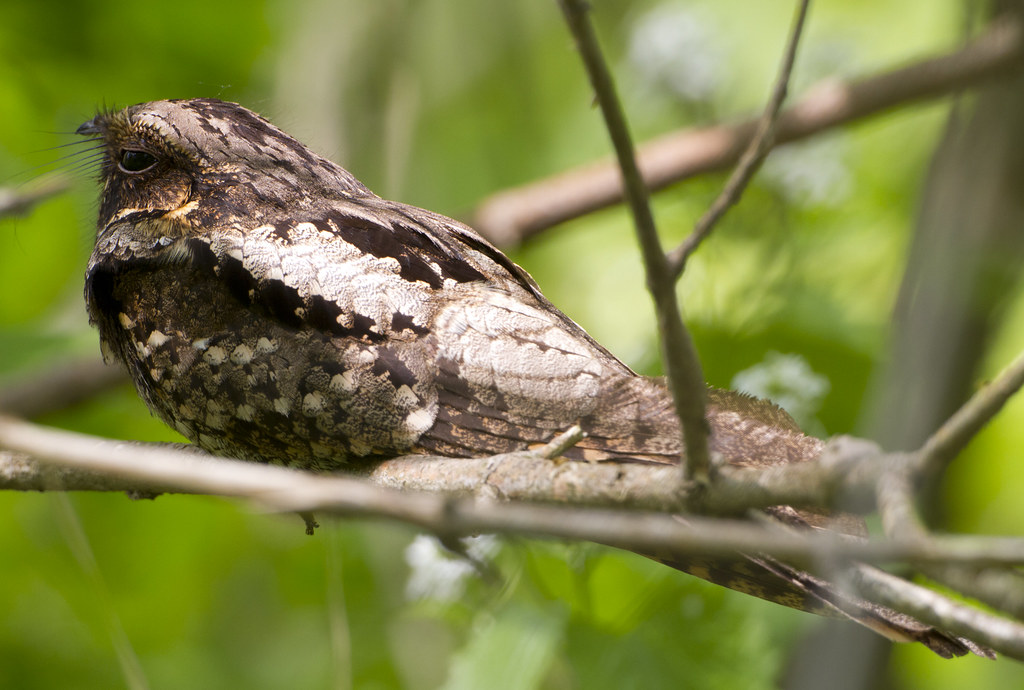 While sitting on the deck at camp one lazy afternoon recently, one of our friends asked, “Why don’t we hear Whip-poor-wills anymore?”

Often heard but seldom observed, the whip-poor-will chants its name on summer nights in the eastern woods. Sometimes, the song seems to go on endlessly.

The whip-poor-wills, Antrostomus vociferus, have been made famous in folk songs, poems and literature for their endless chanting on summer nights.

Randy Travis features that fact in his song, Deeper than the Holler, with the stanza that goes:

During the night, they will lay low and fly upwards to catch moths and other aerial insects.

At dusk and dawn, and on moonlit nights, they scurry out of their perches to sweep up insects in their large mouths.

During the day, they roost on the forest floor, or on a horizontal log or branch, and are very difficult to spot. Their brindled plumage blends perfectly with the gray-brown leaf litter of the open forests where they breed and roost.

Look for them in open understories. They can be found in both purely deciduous and mixed deciduous-conifer forests, often in areas with sandy soil.

Eastern whip-poor-wills migrate to Mexico and Central America for the winter, apparently traveling mostly over land to get there. In spring they arrive in breeding grounds between late March and mid-May. Since they are less vocal in autumn, less is known about their southward migration routes and timing, but they seem to leave between early September and late November.

The Eastern whip-poor-wills are medium-sized birds with a large, rounded head and a stout chest that tapers to a long tail and wings, giving them a distinctly front-heavy look. Like all nightjars, they are patterned with a complicated mottling of gray and brown, which camouflages them nearly perfectly with leaf litter and tree bark.

Nesting activities may be timed so adults are feeding young primarily on nights when the moon is more than half full, making it easier for them while foraging. Males sing at night to defend their territory and to attract a mate. They do not build nests in the traditional way. The nest site is on the ground in shady woods but often near the edge of a clearing, on open soil covered with dead leaves. They do not build a nest, but instead the eggs lay on the flat ground.

The entire state of Maine is part of the whip-poor-wills range.

But, getting back to the original question: Eastern whip-poor-wills are still fairly common birds, but their numbers declined by almost 3 percent per year between 1966 and 2015, resulting in a cumulative decline of 75 percent during that time, according to the North American Breeding Bird Survey. In some areas, parts of their range seem to have become unoccupied. Partners in Flight estimates a global breeding population of 2 million with 95 percent living part of the year in the U.S.

The decline in parts of their range is blamed mostly on open forests being converted to pasture urbanizing and agriculture. Although it’s not fully understood, the decline may also be caused by a general reduction in numbers of large moths and beetles.

The Eastern whip-poor-will is on the 2016 State of North America’s Birds’ Watch List, which includes bird species that are most at risk of extinction without significant conservation actions to reverse declines and reduce threats. Also, because whip-poor-wills often fly over roads or sit on roadways while foraging, they are also vulnerable to collisions with cars.

Restoration could occur when abandoned farmlands revert to forest.

So, on those quiet, moonlit nights around a campfire, listen off in the distance, and you just might here the call of the whip-poor-will.