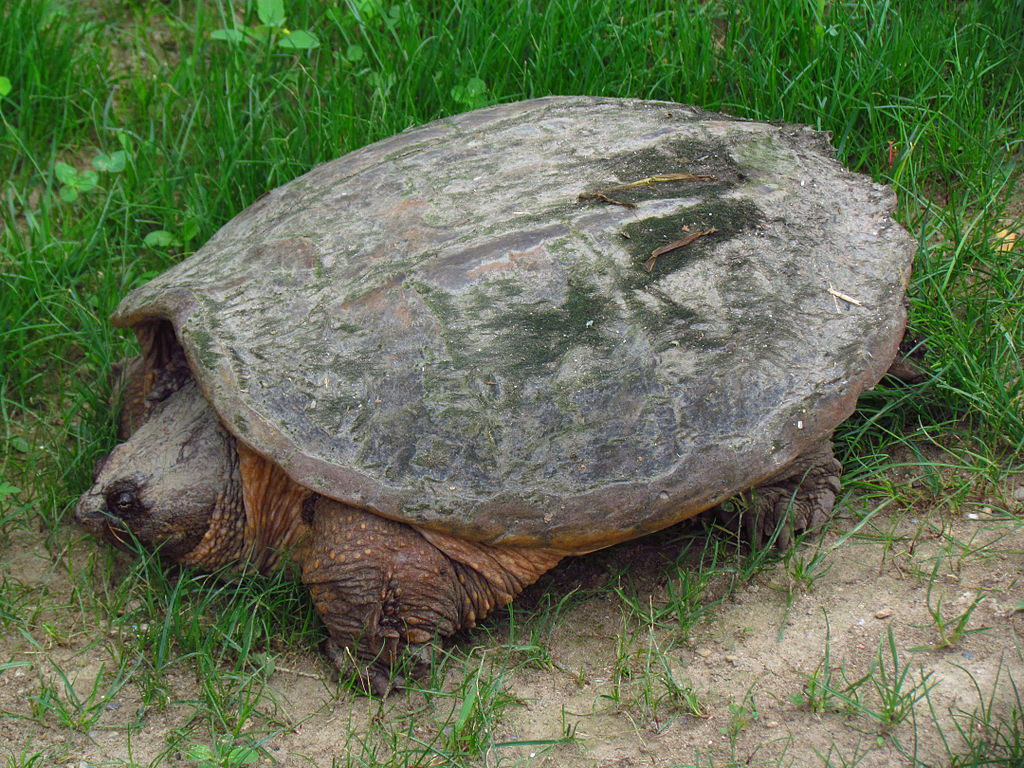 On my way back to camp after having run some errands in town, I was driving the Bog Road, in Vassalboro, coming in from Rte. 201. Upon cresting a hill, I notice something in the road: it was a snapping turtle. I have seen many over the last couple of weeks as they are looking for a place to build a nest. We even had one cross the access road at camp one day.

Anyway, as I approached this particular turtle, it was obviously in a perilous position. I began to slow down to stop and assist the critter across the road when I noticed another vehicle approaching behind me. I began to pull over to let him by when I noticed he pulled over the side of the road, got out of his Jeep, and proceeded to pick up the turtle and place it on the other side of the road. A good Samaritan act.

A few days later, on the Cross Hill Road, in Vassalboro, I observed a woman doing the same thing. Kind of gives you a warm, fuzzy feeling inside to see people go out of their way to protect this species.

The common snapping turtle, Chelydra serpentina, is a species of large freshwater turtle. Its natural range extends from southeastern Canada, southwest to the edge of the Rocky Mountains, as far east as Nova Scotia and Florida.

The common snapping turtle is noted for its combative disposition when out of the water with its powerful beak-like jaws, and highly mobile head and neck. In water, it is likely to flee and hide underwater in sediment.

Females, and presumably also males, in more northern populations mature later (at 15 – 20 years) and at a larger size than in more southern populations (about 12 years). Lifespan in the wild is poorly known, but long-term mark-recapture data from Algonquin Park, in Ontario, Canada, suggest a maximum age over 100 years.Head

Males are larger than females, with almost all weighing in excess of 22 pounds. Any specimen above the aforementioned weights is exceptional, but the heaviest wild specimen caught reportedly weighed 75 pounds.

Common snapping turtles have few predators when older, but eggs are subject to predation by crows, American mink, skunks, foxes, and raccoons. As hatchlings and juveniles, most of the same predators will attack them as well as herons (mostly great blue herons), hawks, owls, fishers, American bullfrogs, large fish, and snakes. Other natural predators which have reportedly preyed on adults include coyotes, and American black bears. Large, old male snapping turtles have very few natural threats due to their formidable size and defenses, and tend to have a very low annual mortality rate.

These turtles travel extensively over land to reach new habitats or to lay eggs. Pollution, habitat destruction, food scarcity, overcrowding, and other factors drive snappers to move; it is quite common to find them traveling far from the nearest water source. Experiment­al data supports the idea that snapping turtles can sense the Earth’s magnetic field, which could also be used for such movements (together with a variety of other possible orientation cues).

This species mates from April through November, with their peak laying season in June and July. The female can hold sperm for several seasons, using it as necessary. Females travel over land to find sandy soil in which to lay their eggs, often some distance from the water. After digging a hole, the female typically deposits 25 to 80 eggs each year, guiding them into the nest with her hind feet and covering them with sand for incubation and protection.

Incubation time is temperature-dependent, ranging from 9 to 18 weeks. In cooler climates, hatchlings overwinter in the nest. The common snapping turtle is remarkably cold-tolerant; radiotelemetry studies have shown some individuals do not hibernate, but remain active under the ice during the winter.

In the northern part of their range, hibernating snapping turtles do not breathe more than six months since ice covers their hibernating site. These turtles can get oxygen by pushing their head out of the mud and allowing gas exchange to take place through the membranes of their mouth and throat. If they cannot get enough oxygen through this method they start to utilize anaerobic pathways, burning sugars and fats without the use of oxygen.

Although designated as “least concern” on the International Union Conservation of Nature (IUCN) redlist, the species has been designated in the Canadian part of its range as “Special Concern”. However, the population has declined sufficiently due to pressure from collection for the pet trade and habitat degradation that Canada and several U.S. states have enacted or are proposing stricter conservation measures.

It is legal to harvest turtles in Maine for personal, but not commercial, use. While their population has declined in some areas due to pollution or loss of habitat, the snapping turtle is not considered a threatened or endangered species.

In their environment, they are at the top of the food chain, causing them to feel less fear or aggression in some cases. When they encounter a species unfamiliar to them such as humans, in rare instances, they will become curious and survey the situation and even more rarely may bump their nose on a leg of the person standing in the water. Although snapping turtles have fierce dispositions, when they are encountered in the water or a swimmer approaches, they will slip quietly away from any disturbance or may seek shelter under mud or grass nearby.

The common snapping turtle is a traditional ingredient in turtle soup; consumption in large quantities, however, can become a health concern due to potential concentration of toxic environmental pollutants in the turtle’s flesh.

The common snapping turtle can bite its handler even if picked up by the sides of its shell. The claws are about as sharp as those of dogs. Despite this, a snapping turtle cannot use its claws for either attacking (its legs have no speed or strength in “swiping” motions) or eating (no opposable thumbs), but only as aids for digging and gripping.

It is a common misconception that common snapping turtles may be safely picked up by the tail with no harm to the animal; in fact, this has a high chance of injuring the turtle, especially the tail itself and the vertebral column. Lifting the turtle with the hands is difficult and dangerous. Snappers can stretch their necks back across their own carapace and to their hind feet on either side to bite.

It may be tempting to rescue a snapping turtle found on a road by getting it to bite a stick and then dragging it out of immediate danger. This action can, however, severely scrape the legs and underside of the turtle and lead to deadly infections in the wounds. The safest way to pick up a common snapping turtle is by grasping the carapace above the back legs. There is a large gap above the back legs that allows for easy grasping of the carapace and keeps hands safe from both the beak and claws of the turtle. It can also be picked up with a shovel, from the back, making sure the shovel is square across the bottom of the shell. The easiest way, though, is with a blanket or tarp, picking up the corners with the turtle in the middle.

While it is widely rumored that common snapping turtles can bite off human fingers or toes, and their powerful jaws are more than capable of doing so, no proven cases have ever been presented for this species, as they use their overall size and strength to deter would-be predators. Common snapping turtles are “quite docile” animals underwater that prefer to avoid confrontations rather than provoke them.

Here’s an interesting little riddle: If a turtle is out of its shell, is it naked or homeless? Just something to think about.

Who holds the Boston Red Sox record for having played the most games with 3,308?