A 40-year study conducted by the Audubon Society has found that more than half of 305 bird species in North America are spending the winter about 35 miles farther north than they did 40 years ago. Some of these birds include chickadees, robins and owls. 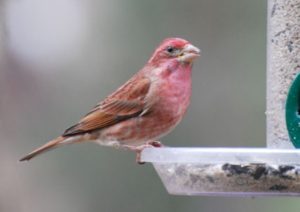 Bird ranges can expand for many reasons, among them urban sprawl, deforestation and the backyard feeders.

The study suggests that the reason so many birds over such a broad area are wintering in more northern locations is climate change.

The study of migration habits from 1966 through 2005 found that about a quarter of the species have moved farther south. But the number moving northward (177 species) is double that amount.

Of all the birds, the purple finch was the biggest mover. Its wintering grounds are now more along the latitude of Milwaukee, Wisconsin, instead of Springfield, Missouri.

Over the four decades covered by the study, the average January temperature in the United States rose by about five degrees. That warming was most pronounced in northern states, which have already recorded an influx of more southern species and could see some northern species move into Canada.

The study also provides support for what many bird watchers across the country have long thought – that many birds are responding to climate change by moving farther north. 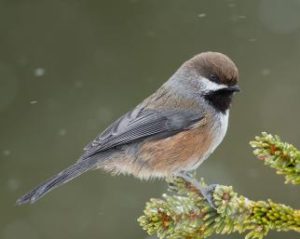 Previous studies of breeding birds in Great Britain and the eastern U.S. have noticed similar trends. But the Audubon study covers a broader area and includes many more species.

Examples of these are the purple finch and the boreal chickadee. They are spending their summers in the forests of Canada and fly south into the U.S. for the winter. Climate change could be playing a role in why they are not flying as far south as they used to. This is reflected in the fact that these species of birds are no longer as common as they once were in states like Maine and Vermont.

The Audubon Society likes to conduct their bird counts in mid-December. At that time of year, temperature is the primary driver for where birds go and whether they live or die.To survive the cold, birds need to eat enough during the day to have the energy needed to shiver through the cold nights.

With the milder winters that the northeast have been experiencing in that four-decade span, it is possible that birds don’t need to expend as much energy shivering, and can get by eating less food in the day.

However, researchers cannot explain why some certain species are moving. It’s speculated that changes in temperature affect different birds in different ways.

Researchers don’t know for a fact that it is warming. But when they keep finding the same thing over and over, they reason that it is not just a figment of the imagination.

The 6th annual Maine Pond Hockey Classic took place last weekend at the Snow Pond Center for the Arts, in Sidney. Over 60 teams and 500 players from the northeast, Canada, and beyond, participated in this annual event, sponsored by the Harold Alfond Boys/Girls Club. The classic was founded in 2013, and its original site was on China Lake, in China.

I watched a lot of hockey over the three-day tournament and found most of it competitive. The A, B and Over-35 divisions showcased some good hockey. However, if I may make one suggestion, it would be this: there needs to be a better vetting process for the C category, or Recreational Division as it is named.

That class was the largest of the different groups. The level of talent was too broad. There were many teams with talent that should have been playing in higher divisions against stiffer competition. I watched a game on Saturday morning that ended 22-4 – I think. I lost track of the goals because they were coming so often. Not very entertaining nor competitive hockey. It was obvious that members of the losing team were amateurs who play in recreatonal leagues with below college skills, while the winners had obviously played at much higher levels. There were some teams in the recreational division that were comprised of players with much more experience from higher levels of competition.

Although many players said they had fun, I doubt losing 22-4 is exactly a joy ride. I suggest to the organizers that players with college or higher experience should not be paired against those who have high school or lower backgrounds.

If I may have one more suggestion: They need better monitoring of the games by officials. I witnessed countless rules violations that were not addressed.

When did the U.S. last host a winter Olympics?

I’m Just Curious: A huge thank you Roland’s trivia question of the week of February 15, 2018
Scroll to top