It has already been a month since my wife and I moved to camp for the summer. With the annual trek comes the installation of the bird feeding stations that are all around us. We get the usual local congregations of chickadees, nuthatches, gold finches, blue jays, woodpeckers and occasional wanderers like the house finches, purple finches and grosbeaks.

However, this year, we have observed a noticeable influx of another species of bird that would, in the past, and at home also, be occasional visitors. That would be the Tufted Titmouse.

They have dominated the feeders, and we can hear their unmistakable calls from the cover of the woods. It is a resounding peter-peter-peter.

What has caused this increase in their numbers? Populations have boomed between 1966 and 2015, according to the North American Breeding Bird Survey. Partners in Flight estimate a global breeding population of 8 million with 100 percent living in the U.S. They are not on the 2016 State of North America’s Birds Watch List. The most probable reasons for the range expansion include a warming climate, reversion of farmlands to forests, and the growing popularity of backyard bird feeders. It’s a story we have heard over and over about these different species of birds that are migrating further north.

It is generally thought that tufted titmice, as of late, have become year-round residents of their range rather than migrating south.

The Tufted titmouse is a small bird with gray upper-parts and white underparts with a white face, a gray crest, a dark forehead and a short stout bill, with reddish-brown flanks.

Tufted titmice, Baeolophus bicolor, live in deciduous woods or mixed evergreen-deciduous woods, typically in areas with a dense canopy and many tree species. According to this, our camp is a haven for this species of bird. They are indiscriminate eaters. They eat mainly insects in the summer, and include seeds nuts and berries in their diet. Experiments with tufted titmice indicate they always choose the largest seeds they can when foraging. They typically hold the seed with their feet and hammer it open with their beaks. In fall and winter, they often hoard these shelled seeds in bark crevices. 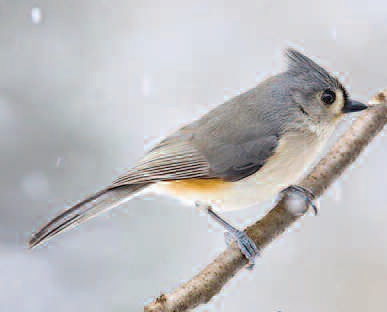 Like the chickadee, they can only take one seed per trip and usually shell the seeds before storing them.

While foraging, they hop among branches and twigs of trees, often hanging upside down, sometimes hovering momentarily.

The female will lay from five to six eggs, with sometimes as many as nine. The eggs are under an inch long and are white or cream-colored with brownish or purplish spots. The incubation is done by the female only. They will hatch is 12-14 days. The male will feed the young during the early days, but both parents will feed the chicks as they get older. The young will leave the nest in 15-16 days following their hatching.

Tufted titmice nest in a hole in a tree, either a natural cavity, a manmade nest box, or sometimes an old woodpecker nest.

The oldest known wild Tufted Titmouse was at least 13 years, three months old. It was banded in Virginia in 1962, and found in the same state in 1974.

There is always something going on with Mother Nature.
CHICKADEE UPDATE

If you recall, a couple of weeks back I told of a chickadee that had taken up residence in a long-abandoned bird house behind our camp. We hadn’t seen it in a couple of weeks, thinking the worse, after seeing a blue jay in the area. Well, she was spotted this weekend, in the bird house. We didn’t want to approach the house causing a disturbance. We can only assume there are eggs in there. We will continue to monitor the situation.

Legal Notices, Week of June 15, 2017 Bikes for Books in Windsor
Scroll to top