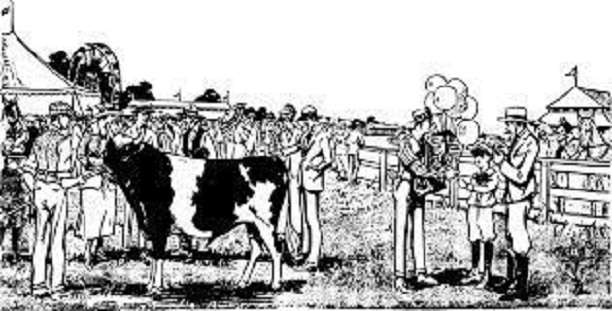 Your writer is pleased that she didn’t promise a story about Hathaway shirts this week, because, considering the season, she decided to detour to write about the country fairs our ancestors enjoyed. Some of the historians cited previously in this series mentioned them; your writer will share bits of their information.

Albion historian Ruby Crosby Wiggin was delighted to find secretaries’ records of the Farmer’s and Mechanic’s Club of Albion (the apostrophes are as she placed them), organized Oct. 5, 1863, and sponsor of an annual October fair from Oct. 13, 1863, through at least 1891, when the records end.

The secretaries’ books answered a question that had plagued her research: local residents told her three different locations for the fairs. The records showed everyone was right.

The 1863 fair was in the Temperance Hall, on Bangor Road, with outdoor exhibits near the former Marden’s – later Drake’s – store. After what was first the Public Hall and later the Grange Hall was built in 1873, the fair moved there and used land behind Keay’s store, on Main Street. And after the town house was built in 1888, it hosted indoor displays, with outdoor events in the field behind the Besse building.

Exhibits became more varied over the years, Wiggin wrote. She listed some she considered unusual: a “collection of stuffed birds”; a 100-year-old chair; an English table cover more than 100 years old; woolen stockings and a patchwork quilt made by women in their 90s; and a “worsted lamp mat” made by a six-year-old boy.

She found no description of baby shows, but, she said, in 1865 the “largest, fattest and best fed baby” won a prize, and in 1879 a committee named the “longest and leanest and poorest fed man.”

Old-time residents told Wiggin the Albion fair sometimes included a merry-go-round “run by two fellows turning it by a crank in the middle.” It was reportedly owned by Stevens Brothers, from Unity, and was a feature of annual Unity fairs.

Palermo historian Milton E. Dowe, in his 1996 book of memories, included a short description of the annual Branch Mills Grange fair, where, he wrote, “A wonderful time was had by all.” His undated description refers to a time after 1909, when the Grange Hall, in Branch Mills Village, was built after the 1908 fire.

Behind the building, Dowe wrote, was a hitching rail where people left their horses for the day. On the grounds were cattle exhibits and the horse pulling competitions that were “the highlight of the Fair day.”

Alice Hammond’s history of Sidney credits the Sidney Grange with starting the Sidney Agricultural Fair in 1885; it continued well into the 20th century. Kingsbury said its specialties were fruit –Sidney had many apple orchards – and “working cattle.” One year, he wrote, 75 yokes (pairs) of cattle paraded in a line.

Hammond included a report that the fair’s treasurer, Martin L. Reynolds, put in the 1890 town report “[o]wing to the inquiry of some of the townsmen” about the use of town funds.

From 1887 through 1890, taxpayers gave the fair $25 annually. In 1887, fair organizers spent $24.62. The largest expenditure was $9 to E. A. Field for “lumber and hauling same.” The two smallest were 30 cents each for two dozen hooks from O. Williamson and “Swifel Eye to machine” from J. S. Grant (Hammond wondered what a swifel eye was; your writer suggests a misspelling for swivel eye).

In 1890 three individuals added $21.94 to the $25 appropriation. The account was nonetheless overdrawn for the first time, mostly because the Oakland Band, making its first appearance, cost $20. Because of earlier frugality, however, treasurer Reynolds reported a balance in the fair treasury of $12.91 at the end of four years.

The year 1890 was also the first year that fair organizers bought a police badge, for 75 cents. Hammond wondered if the crowd was getting rougher, or if the organizers were merely being extra careful.

Alma Pierce Robbins focused her Vassalboro history on agricultural organizations, mentioning fairs only incidentally. The Vassalborough Agricultural Society was organized in 1820, she wrote. The town had three Granges, Oak Grove (1875, moved to Getchell’s Corner in 1883), Cushnoc at Riverside (1876) and East Vassalboro, organized in 1895 and still flourishing.

The Agricultural Society must have sponsored fairs, because Robbins wrote of spring “preparations to exhibit at the Fall fairs.” She also wrote about “premiums” for “wheat, corn, hemp, flax and silk,” and “prizes” for “cattle, sheep and swine,” and mentioned oxen-pulling and later horse-pulling.

Robbins specifically referred to Cushnoc Grange fairs “with fine exhibits of hand work, farm produce and stock.” She added memories of “the oyster stew suppers on cold snowy nights, the baked bean and brown bread dinners with great jars of home made pickles and dozens of apple pies,” where all the neighbors gathered.

Windsor’s extensive fairgrounds are at 82 Ridge Road (Route 32), not far north of the intersection where Route 32 joins Route 17. The site includes a dozen historic buildings restored and maintained by the Windsor Historical Society, multiple exhibition halls for everything from livestock to jams and jellies, an oval racetrack and large parking areas.

Lowden wrote that the first Windsor Fair was held Oct. 3 and 4, 1888, before the South Kennebec Agricultural Society was organized and legislatively incorporated in the spring of 1889. There is some confusion about whether a formal racetrack was used that year; Lowden said “a firmly held local tradition” is that horses ran on the road that is now Route 32, across a bridge that “stood high above” Gully Brook. But he found an Oct. 5, 1888, newspaper report saying there was a race track by 1888, so he inferred the in-the-road races must have been earlier.

Lowden wrote that the horse races have always been the most popular attraction and “the financial backbone” of the fair. Other features he described included displays of and competitions among other farm animals. In 1888, the exhibition of horses and colts drew a local reporter’s praise; the reporter was even more enthusiastic about the displays of fruit, vegetables and “artistic needle and fancy work.”

The fair introduced inventions and new practices for farmers and their families, like a new parlor stove and a new kitchen stove in 1893; an automobile in 1900; a hot air balloon in 1902; and an airplane in 1917. The midday featured varied entertainers, simple games, food vendors; the first merry-go-round appeared in 1916.

Although Maine’s 2022 fall fair season is winding down, there is still time to take in some that aren’t too far from the central Kennebec Valley.

CORRECTION: The building in the photo in last week’s issue is the Clukey Building, located on the corner of Main and Silver streets, location of the Paragon Shop today. It was an editing error.