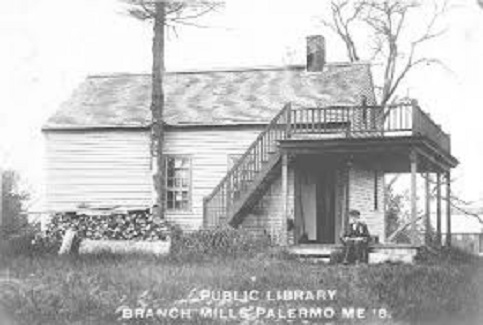 The Branch Mills Public Library, with what could possibly be Thomas Dinsmore Jr., founder, sitting on the porch.

Palermo residents are currently enjoying at least the third library in the town’s history.

The earliest, according to Millard Howard’s history of Palermo, was started by Benjamin Marden 2nd, “around mid-century [1850], apparently at his home on Marden Hill,” and was called the Palermo and China Social Library. Marden Hill is in northeastern Palermo; several Mardens from New Hampshire started farms there in the 1790s.

Another Benjamin Marden was born in New Hampshire Sept. 29, 1781, and died, in Palermo, March 3, 1859, aged 77. The genealogies name his wife, Catherine (Spiller), and indicate they had no children.

A third Benjamin Marden was born Oct. 26, 1798, on Marden Hil,l in Palermo, and died in Palermo June 2, 1863, at the age of 64, according to other genealogical sites. He and his wife Hannah (Carr) had two children.

The genealogies do not show relationships, if any, among the three, nor give details about their lives or interests.

The best-known Palermo library before the present one was Dinsmore Public Library, founded in 1905 by Thomas Dinsmore, Jr. It was on a hill in Branch Mills Village, east of the Sheepscot River and south of Main Street.

Dinsmore bought an acre-and-a-half lot with a house, landscaped the grounds and turned the house into a library, which served Palermo residents until at least the mid-1950s.

An on-line edition of the Maine (State) Library Bulletin has a short article on the Dinsmore Library, written in 1916 or 1917. (The on-line book is Volumes 4-7; Vol. IV, No. 1, is dated July 1914; but there are so few annual dates in the following pages that it is difficult to know what year events occurred. This writer assumed Vol. VII covers 1917.)

The writer called the Dinsmore Library “One of the most interesting libraries in the county.” (The county referred is Waldo, not Kennebec; the state considered the library to be in Palermo.)

Palermo historians Millard Howard and Milton Dowe wrote that the building Dinsmore bought was built around 1800. Previous owners had included Ralph Turner, Francis Moody (who ran his cobbler’s shop there) and the Bragg family.

By 1916, the Library Bulletin said, the small building was “surrounded by an attractive park with flowering plants and shrubs and a tall flagstaff from which the national colors are daily flung to the breeze.”

The China bicentennial history describes Dinsmore’s method of obtaining books for his library: he wrote to publishers and asked for them. Donations included “dictionaries, encyclopedias, a complete set of Shakespeare’s works, and other valuable volumes.”

He also asked owners of a newspaper in Massachusetts to which he subscribed to sell him the books serialized in the paper – and received them as gifts.

“Usually,” the reporter said, library hours were 2 to 4 p.m. (Dinsmore was the only librarian, so the hours might occasionally have been interrupted by other obligations).

The Library Bulletin writer described with obvious approval Dinsmore’s “unique” way of lending books. There was no charge to borrow, and anyone was eligible “if he was satisfied that such person would take good care of the book.” He almost never lost a book, the writer said.

The Kennebec Journal reporter added that the loan period was 30 days, “to accommodate those from a distance.”

The China bicentennial history called him Branch Mills’ “leading philanthropist.” Various sources describe his generosity: his Branch Mills land included a children’s playground; he opened $5 bank accounts for babies born in Palermo; at least once he gave high-school graduates $1 bank accounts; in 1903 he built a monument “to the memory of the lives of the early pioneers of the Town of China and Palermo.”

The Library Bulletin writer called Dinsmore “a gentleman of the old school, courteous and gentle and the children loved him,” and “a picturesque figure,” with “his shawl and cane.” The writer said his recent death “was a cause of real grief” in the community, and predicted that “The Dinsmore Library will live on, however, and many will continue to bless his name.”

After Dinsmore died, the library went to the Branch Mills Improvement Society. Dinsmore left a trust fund, with the interest to be used for maintenance.

His son, James Roscoe Bowler Dinsmore, did work on the building that included a new ceiling and floors, more windows, more bookshelves and “the rooms rearranged for greater convenience,” according to another state report.

H. L. Pinkham kept the library’s books at his store during the renovations, the state report said. By December 1917, the books had been rearranged on the new shelves.

Local residents raised money to help provide books (Dowe wrote there were about 3,000 in 1954), and the library thrived “for many years,” but the state bookmobile had replaced it before the China history was published in 1984.

The 1914-1917 state report has one more reference to Palermo, in its section on traveling libraries. A traveling library was a collection of 50 books, 30 fiction and the rest “juvenile, travel, biography, poetry, etc.” A community could borrow a box for six months for $2.50, with the state paying transportation charges.

There were also half-size, half-price special collections “for the use of schools and study clubs.”

The report lists one of the borrowers as a regular library, the Sheepscot Lake Grange.

The present Palermo Community Library is at 2789 Route 3. It was designated a non-profit organization in 1998 and is run on an all-volunteer basis, supervised by a Board of Trustees. Its website is Palermo.lib.me.us.

The Town of Sidney has apparently never had an organized public library, but in the 21st century at least two public-spirited local people have made arrangements for sharing books.

One is Kimberly Spears, who earned her Girl Scout Silver Award in 2018 by organizing the Sidney Free Library, a lending library based at the town office. The Regional School Unit #18 blog has a September 2018 article explaining how she involved other community members as she designed the weatherproof library box and led story hours for children.

Photos on the library’s Facebook page show a painted box on a sturdy pole with two shelves filled with books. Town office Executive Secretary Mary Blaschke said the library gets “a fair amount of traffic” as residents borrow and donate books.

The other volunteer library is the Prescott Road Little Free Library at 1004 Prescott Road. The homeowners have a box stocked with a variety of adult and children’s books and occasional magazines, according to Facebook posts and photos.

Windsor is another area town with no record of a public library. Here, too, a family has opened a Little Free Library, #54683, located at 36 Greeley Road.

Wikipedia says Todd Herbert Bol (Jan. 2, 1956 – Oct. 18, 2018) created the first little free library in 2009 in Hudson, Wisconsin. He used the remains of a garage door to build a box, described as a library on a stick, and filled it with books for others to borrow.

The first library was designed “to look like a one-room schoolhouse,” Wikipedia says. Bol’s obituary says he started the project to honor his late mother, “who was always welcoming kids to their Stillwater [Minnesota] kitchen table for a sandwich or help with homework.”

When neighbors admired his library, he built more, and soon he and a partner were setting up libraries in boxes all over the Midwest. In 2012, Little Free Library was incorporated and accepted by the Internal Revenue Service as a 501(c)(3) nonprofit organization.

Bol’s initial goal was 2,510 libraries, to beat Andrew Carnegie’s total number of library buildings. The goal was met in 2012, and there are now more than 90,000 Little Free Libraries in more than 90 countries. 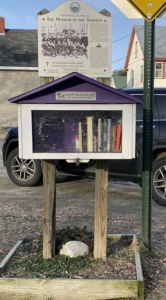 The concept is that an individual, family or organization builds a box big enough to hold several dozen books; puts it on a stand or pole in a visible location; and invites others to borrow books and either return them or replace them with other books. Most of the boxes shown on line have two shelves and a glass front that opens; details like roof style and paint color(s) vary.

Bol was born in North St. Paul, Minnesota, and taught school in Circle Pines and Cambridge before moving to Wisconsin. He also started Global Scholarship Alliance, an organization that “provides nursing scholarships for advanced nursing,” and two businesses.

The Little Free Library organization continues since his death, headquartered in Hudson.

In addition to the Sidney and Windsor libraries briefly described above, your writer found seven others in the central Kennebec Valley area, and there are probably more. Some are registered and numbered; some are shown on the Little Free Library website’s world map.

Augusta has three. The earliest, Charter #60592 at 44 Westwood Road, was started by University of Maine at Farmington professor Jim Melcher, a long-time “voracious reader” who became acquainted with them in his home state of Wisconsin.

His slant-roofed, two-level box is trimmed in orange, according to a June 2021 photograph in The Kennebec Journal.

Charter #129678, Little Library at Blaisdell, at 2 Blaisdell Street, seems to have only a single level. The unnumbered library at 81 Glenridge Drive is named the Adele Cox Little Free Library, honoring the grandmother of the Flanagan children, “who taught them, and their mother, to love stories.”

The June Kennebec Journal article said the Maine Department of Education had set up five boxes and planned to add three more to encourage summer reading for children (and adults). Staff in the department’s Literacy for Me program are in charge of taking care of the boxes and removing them in the fall, to be put back in late spring.

The Little Free Library website advises people thinking of starting one that many local ordinances define the free-standing boxes as structures needing approval by the municipal Codes Enforcement Officer.

The Lithgow Library at 45 Winthrop St., in Augusta, welcomes area residents to its 125th anniversary celebration, scheduled for 10 to 11:30 a.m. Saturday, Dec. 18. The program includes music by local classical violinist Abreal Whitman, a photo exhibition, a scavenger hunt and “goodie bags” as guests leave. More information is available by calling 207-626-2415 and on the library’s website, lithgowlibrary.org.

For historical information on Lithgow Library and its founder, Llewelyn Lithgow, see The Town Line, Nov. 18.