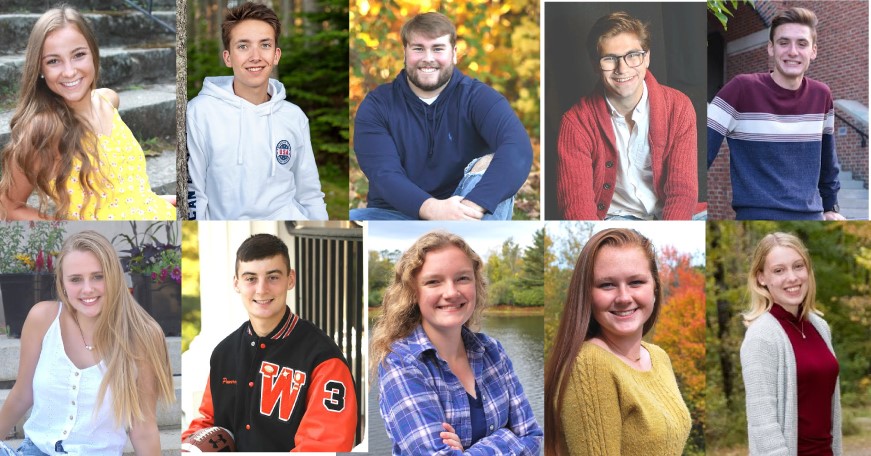 Katie Doughty is the daughter of Laura and Wayne Doughty, of Winslow. Katie was a senior captain for soccer along with participating in lacrosse and indoor track where she broke two school records. She is a member of the National Honors Society, American Legion Auxiliary, and Olympia Snowe Women’s Leadership Institute. She has also participated in the W Club, Service Club, volunteered at Jackson Food Pantry and is a youth sports volunteer. She has been a part of the prom and sadie’s committees along with being a freshmen orientation leader. Katie was a part of the National Youth Leadership Forum, was a delegate at the Congress of Future Science and Technology Leaders and received the Bausch and Lomb Science Award. For soccer Katie received a KVAC second team award her freshman year, KVAC first team award her sophomore and senior years, KVAC honorable mention her junior year and was a regional all-star her senior year. For track she received KVAC All Conference awards her freshman and sophomore years. She will be attending the University of Maine at Orono where she will study Biology and Pre-Medicine.

Brennan Dunton is the son of Brian and Sara Dunton, of Winslow. Brennan participated in soccer, basketball, track and field, outing club, and is a member of the National Honors Society. He received the KVAC All Academic Award for soccer, the Phi Beta Kappa Certificate of Recognition, and the Voice of Democracy Certificate of Merit. He will be attending the University of Maine at Orono where he will study Civil and Environmental Engineering.

Cameron Goodwin is the son of Larry and Kelli Goodwin, of Winslow. Cameron is a member of the National Honors Society and has participated in basketball and lacrosse where he served as a defensive captain. He was a member of the Service Club and was a youth basketball and lacrosse mentor. Cameron has received the Sage Student Scholar Award, Highest Achievement Award in math, and the On the Road to Success Award. He will be attending Lasell University where he will study Fashion Media and Marketing.

Aaron Harmon is the son of Wayne and Nicole Harmon, of Winslow. Aaron has participated in band, chorus, jazz band, pep band, drama, show choir, and barbershop choir. He is also the secretary of the Thespian Society and a member of the National Honors Society. He earned an ALL Cast Award for the MPA One Act Play competition for the last two years. He will be attending the University of Maine at Augusta where he will study Music with a concentration in Education.

Jacob Huesers is the son of Tom and Katie Huesers, of Winslow. Jacob is a member of the National Honors Society and Thespian Society. He is the senior Class President and has attended Boys State as well as the special honor of attending Boys Nation. He participated in cross country, track, drama, Youth in Government through the YMCA, and the Black Raider News Network. He earned the Williams Book Award and George Eastman Young Leaders Award, as well as Renaissance Awards for Top Performance in Honors Algebra II, AP Calculus, Spanish III, Honors World Geography and Honors English 9. Jacob is currently weighing various options for next fall.

Justice Picard is the daughter of Sandra Darby and Michael Picard, of Winslow. Justice is a member of the National Honors Society, Olympia Snowe Leadership Institute, and the W Club. She participated in field hockey, basketball, unified basketball, cross country, and track. She was a part of the prom, sadies, and homecoming committee’s along with being a science mentor aide. She is a volunteer at MaineGeneral and is also a hospice volunteer. She received The Wellesley College Book Award.and was named to the High School National Academic Squad. She plans on attending the University of New England where she will study Pre-med and Medical Biology.

Colby Pomeroy is the son of Cory and Kristen Pomeroy, of Winslow. Colby is a member of the National Honors Society and participated in football, basketball, baseball and the W-Club. Colby has received the MPA Principal’s Award, the Daughters of the American Revolution Award, and the National Football Foundation Scholar Athlete Award. He was a Big 11 Football Co-Player of the Year along with earning KVAC first team for basketball. He earned All Academic Awards for both football and basketball. Colby will be attending the University of Maine at Farmington where he will study Biology.

Carrie Selwood is the daughter of Joel and Shelly Selwood, of Winslow. Carrie is a member of the National Honors Society and has served as the Secretary and Treasurer of the group. She is also a member of the International Thespian Society, American Legion Auxiliary Girls State and Olympia Snowe Women’s Leadership Institute. She has participated in school and community theatre, soccer, lacrosse, and dance committees along with being a part of concert, jazz, and pep bands. She is also the Treasurer for Student Senate. She has received the University of Rochester, Frederick Douglass and Susan B. Anthony Award, the Daughters of the American Revolution Jenny Paine Howard Award, KVAC Athletic All Conference Award for lacrosse, a special commendation for Stage Management at Regional One-Act Competition, Winslow Girls Lacrosse Coach’s Award, and excellence in Honors English. She will be attending Providence College next fall.

Grace Smith is the daughter of Kim Leadbetter, of Winslow, and Jim and Cheyl Smith, of Belgrade. Grace was a captain of her soccer and basketball teams along with participating in track and unified basketball. She is the Co-President of the National Honors Society and is a member of the International Thespian Society. Grace is a math mentor and the Class Treasurer. She also participated in fall musicals, plays, Math Team, Student Senate, W Club and the Civil Rights Team. She received the Dirigo Girls State’s Miss Dirigo and Senator, the Dartmouth Book Award and the Shine on Cass Award. She was also the Most Defensive for soccer, KVAC All Academic for soccer and basketball, KVAC All Conference second team for basketball, and KVAC All Star honorable mention for basketball. Grace will be attending The University of Maine at Orono where she will study Kinesiology and biology with the intention of becoming a pediatric physical therapist.

Katherine Stevens is the daughter of Roger and Stacy Stevens, of Winslow. Katie participated in cross country, track, art club and dance classes. She was a Captain for the Cross Country team her senior year. She is a member of the National Honors Society and a volunteer at HVWA Resale Shop. She received the New Dimensions Credit Union College Scholarship, KVAC All Academic Awards for cross country and track, and the AFSCME Council 93 Local 2178-02 Scholarship. Katie will be attending the University of Maine at Orono where she will be majoring in Molecular and Cellular Biology.

SOLON & BEYOND: News about the Solon Community Garden Up and down the Kennebec Valley: Palermo
Scroll to top