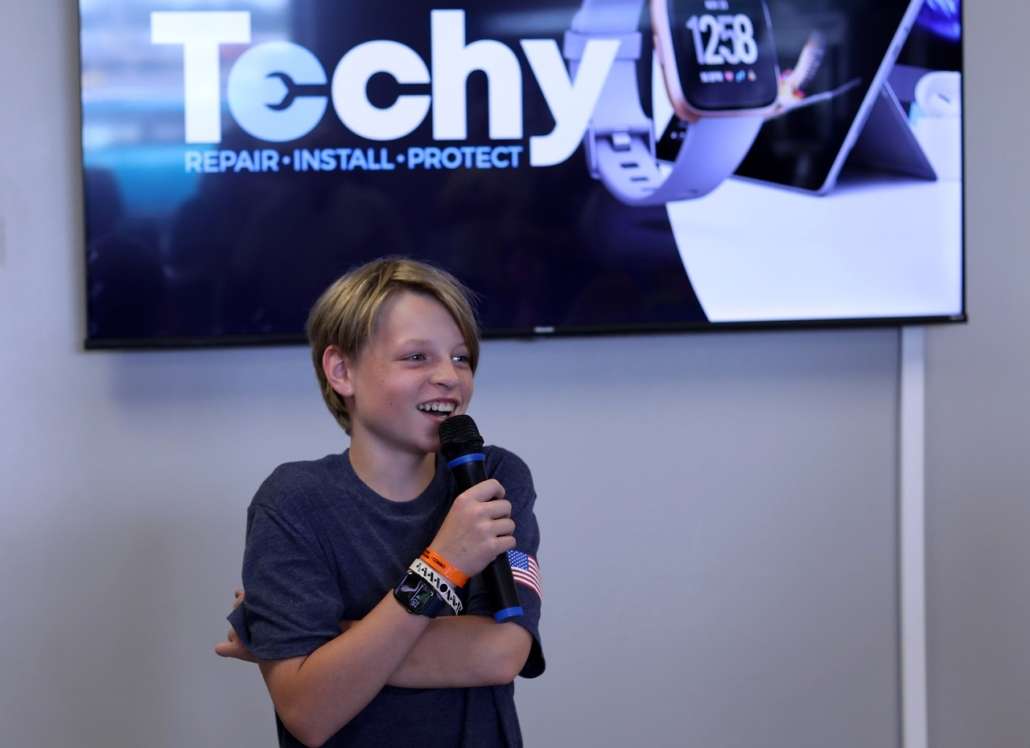 Have you heard about the teenage boy in Maine that started his own electronics repair store? A year ago, Parker Redlevske, of Oakland, was your typical 13-year-old boy playing with friends, going to school, cracking jokes and pulling pranks. His parents say at a young age he has always been very smart, independent and curious of how things worked. He started watching videos on repairing electronics after breaking a few himself and really tested his parent’s patience as he took apart the electronics in their home. His interest in repairing went on to become a business after he spoke to it into existence at a business conference that he went to with his stepfather Jonathan Irwin.

Jonathan is the owner of Wireless Technology Solutions, a partner with Verizon, a company that he and his wife Amy Irwin use to work for. In fact, Parker’s store is in the location where the two of them worked and met. Growing up Parker would get dropped of at their stores while waiting for them to finish work. That is where Amy thinks a lot of Parker’s curiosities came for electronics as well as working with customers. “Parker is amazing with customers, giving them a warm greeting when they walk in, recommending devices and accessories to them, as well as repairing their devices and ringing them out. He is a natural and I really think it is because he grew up around this environment,” said Amy.

In 2020 Jonathan was looking to take his company to the next level and that is when he started being mentored by business mogul Grant Cardone. After spending time weekly with him on webinars, daily calls and at their headquarters, Jonathan decided it was time to share this knowledge. In July he brought his wife to a 10X Business Bootcamp and then she started her own business called No Negatives Photography.

The next event in September, he was looking to bring his staff, and when one member couldn’t attend, that is when Parker asked to go. He went and networked with business owners, got to meet Cardone and on day three, went up on stage and he asked Cardone, “What advice he had to give to someone young like him and what he could start doing now?”

Cardone praised him for going to the conference and gave him advice on leveraging his age and setting a target. Cardone gave Parker a $10,000 goal and asked how he was going to raise that money. That is when Parker told Cardone he had been learning to fix phones online. Cardone had Parker ask the audience to repair their phones and give him $100 for future payment. Parker then crowd-funded $1,800 from the audience and was given a new challenge. Cardone guaranteed to double Parker’s money if he could show it to him by the end of the year. Parker thought how he could protect that money and, on stage, told Cardone he could invest it to keep it safe. He then told Cardone, a real estate investor with a $5 billlion real estate portfolio, that he could invest it with him. The video from that day then went viral on the internet.

Co-owner and founder of Techy, Tim Phelps, saw the video and said he wanted to help Parker launch his business. Tim and the family did a webinar where he discussed wanting Parker to have skin in the game by raising the money for the franchise fee and Techy would help with the build out, additional training and support. Parker’s next task was to raise the capital for the franchise fee which he did in the matter of four months, and exceeded Cardone’s goal for him. In total, between what Parker had raised and Techy had invested had totaled to over $100,000 which exceeded the goal by ten times, that 10X founder/author Grant Cardone had set for him.

Parker asked his parents to homeschool him, and he went down to Techy HQ for training and then opened his store in May which quickly became a hit with the community. Parker then realized he needed more help, and that is when they reached out to Nick Rancourt, who comes with 30 years of IT/repair experience and was the missing piece they needed for Techy Waterville. Rancourt says he enjoys being able to help support and teach Parker with his years of experience but is amazed at how much Parker teaches him as well with his youthful knowledge and perspective.

Parker is carving a path for other youth and hopes to help kids realize age doesn’t matter if there is something they want to do in life, they just need to create a plan, how to get there, and take action. For more information, go to https://techycompany.com/waterville-me.