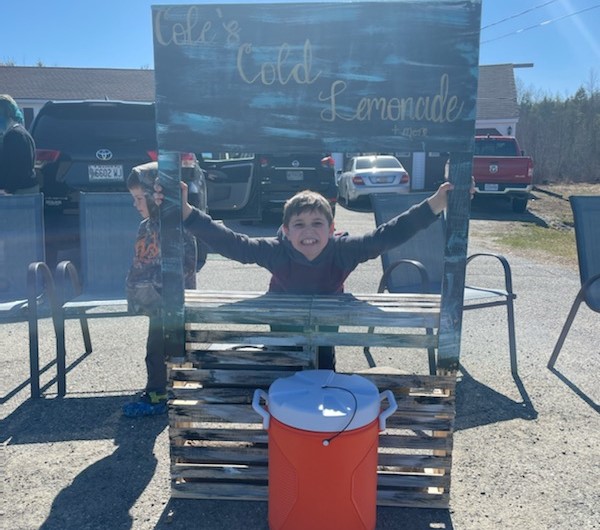 Colbyn’s heroic nature revved into high gear when he knew he had to call his grandma to tell her that his mom was really sick. True super heroes know when they need to call in for back ups. “Nana” Julie Norton flew in from Florida to watch the house and the rest of the family, when her daughter spent a few days in the hospital. Julie Norton explained, “I’ve never seen my daughter this sick before.”

When Jessica’s Facebook friends asked her if she needed anything once she returned home, Jessica replied back that she just needed help to make Colbyn’s 9th birthday really special this year because he didn’t have a party last year because of the Covid precautions. “Nana” Julie saw this posting and got the idea of throwing a drive-by parade in honor of Colbyn’s birthday because a party was still out of the question this year. The big question was how could this be pulled together with less than two weeks notice? Perhaps there’s a superhero within every grandmother, too? Julie began posting an event on Facebook for April 3, called Colbyn’s Beep-Beep Birthday, asking for participants to drive vehicles in the parade.

Another important part of this story is Colbyn had established a lemonade stand called Colby Cole’s Cold Lemonade, where the family had met people in town. This is where Julie met Carl Chapman, safety officer for the Albion Fire Department and an avid biker. Carl agreed to post the event on the several biker sites he follows, including Motorcycle Riders of Maine, but he wasn’t sure what response they would get, “most of the guys hadn’t gotten their bikes out of storage yet.” 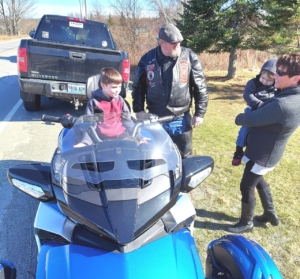 The word of the parade touched a soft spot in people’s hearts and the posting went from area biker Facebook pages to Jeep club page to the Penobscot Valley 4-wheel drive club all the way from Hampden. Stephen Marois, from Riding Steel, shared the event on his biker page as well. The Albion Fire Chief of the Red Knights Chapter 13 and the Kennebec Sheriff Department enthusiastically agreed to participate.

Until the day of the event, Julie didn’t know how far and wide her request went out. She, Carl and another biker arrived at Dixon’s Country Market, the meeting place for the parade, a half hour before the event. No one was there.

A Kennebec Sheriff Department vehicle pulled into the parking lot, so Julie went up to ask if they were there for the parade. To her surprise, they said “yes” and were discussing the route. Then, the vehicles started rolling in, some even decorated for a birthday parade. There were motorcycles, fresh out of winter storage. There were eight to ten complete strangers in Jeeps, Colbyn’s favorite vehicle. There were Bob and Polly Matthews with Kevin Napilitano from the Penobscot Valley 4-wheel drive club. The Albion Fire Department made a dramatic appearance as they joined the parade with an engine, rescue and brush trucks. At the end of the parade, the Kennebec officers presented Colbyn with a Challenge Coin and made him an honorary deputy.

Julie Norton and the rest of her family were overwhelmed by the community support to create a birthday celebration for a nine-year-old that he will never likely forget. Julie remarked, “I’m telling you, I didn’t know what to say. It was absolutely amazing how a community pulled together on a drop of a hat.”

This unofficial, impromptu event in Albion, Maine, reminds us that good deeds are contagious and stir the inner hero within ourselves. If you are looking for more inspiration, drop by Colbyn Cole’s Cold Lemonade stand on good weather days after his school work is complete, at 192 Benton Road, Albion.