OK, this is the time of year when I stick out my neck, and defy all the experts when it comes to predicting the upcoming winter – I was right last year and they were wrong. All of the ads on TV and radio this past month or so were reporting a tough and harsh 2016-17 winter for Maine. The one common denominator in all of these brainwashing advertisements is that the sellers were pushing snowblowers, snowmobiles, ridiculously large trucks with plows, home heating materials, etc. Get the drift?

Well, I have come up with something that contradicts even the usually reliable publications on that subject.

As in the past, if you have read this column, I rely more on Mother Nature to provide me with the signs of the impending winter months.

First, we will go to the annual cicada, you know, the little guy you never see that gives off that loud buzzing sound during the hot summer months. Old farmers lore says that from the date you first hear its call, the first killing frost will occur 90 days later, following the full moon. We have a little controversy on that issue this year. Traditionally, you will hear it anywhere from early to late July, bringing the first killing frost in October. This year, with the strong objections from my wife, I have yet to hear one. However, she claims she heard them back around July 15, and continues to insist she has heard them, as recently as last Saturday. Their sound is usually quite distinct. If they have been buzzing, they are extremely faint. My wife has claimed for some time now that I am going deaf, much to the differing opinion of my doctor. 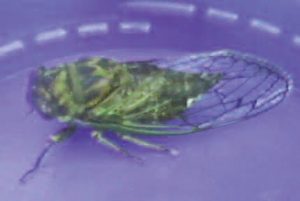 An annual cicada we found in a woodpile at camp a couple of years ago.

It is called the annual cicada because it makes an appearance yearly, as opposed to the periodical cicada, that you hear about in the news, that occurs in large swarms only every 13 – 17 years.

Cicadas typically live in trees, feeding on sap, and laying their eggs in a slit in the bark.
Cicadas have been featured in literature since the time of Homer’s Iliad, and as motifs in art from the Chinese Shang dynasty. They are also eaten in China, where the nymphs are served deep fried in Shandong cuisine.

But, I’m venturing away from the topic.

The second indicator of what I am believing will be another mild winter is the placement of bee hives. All summer, I have heard reports from various people of them finding the hives in the ground or at the bottom of trees and tree stumps. Many have been stung while mowing their lawns. That is a usual telltale sign of below normal snowfall. When we have winters with higher than normal precipitation, bee hives are usually located higher, sometimes in trees or under eaves of outbuildings.

A third sign is the common yellow onion. My mother told me many years ago you can tell the severity of an upcoming winter by how the onion peels and its strength. The easier it is to peel, and the milder the taste, the more tame the winter. If an onion is really strong, and is difficult to peel, it means a harsh winter. My wife and I have onions with almost every meal, so we have peeled our share, and they have peeled awfully easy this summer. 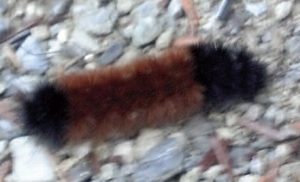 Finally, old faithful, the wooly bear caterpillar. For those who don’t know, old folklore states the wider the red band on a wooly bear, the milder the winter. Usually by now, mid-September, you would have seen many of these fuzzy little creatures. So far, I have seen only one, and the rust-colored band on this particular one was very long, occupying possibly one-half to two-thirds of its body. I’m predicating my prediction on this one sighting, which, scientifically, is a small sample size.

So, with all the evidence presented, I will make a bold prediction that we are facing another mild winter ahead of us. But, I can’t tell you whether it will be as mild as last winter, but relatively speaking, milder than an average Maine winter.

Just don’t tar and feather me if we end up with mounds of snow and below zero temperatures. I can only foretell based on what the natural data suggests.

IF WALLS COULD TALK, Week of September 15, 2016 First place winners in Freeport
Scroll to top