CHINA, ME — China voters coming to the polls on Tuesday, June 14, might want to bring at least a water bottle for sustenance. Balloting will take a while.

In addition to the 38-article warrant for the annual town business meeting, each voter will be handed two more pieces of paper. Those enrolled in the Republican or Democratic party will get a fourth ballot.

Regional School Unit #18, which includes Belgrade, China, Oakland, Rome and Sidney, has two separate ballots. The familiar one, the school budget referendum ballot, asks if voters will approve or reject the 2022-23 budget approved at a May 19 open meeting of voters from the five towns. A second question asks voters whether they want to continue the referendum vote for another three years.

RSU #18 Superintendent Carl Gartley told China select board members at their May 9 meeting the proposed budget was about 1.57 percent, or about $643,000, higher than the current year’s budget. China’s share was projected to increase by 0.96 percent, or about $48,000, he said.

A separate RSU #18 ballot asks if voters will approve or reject a proposal to borrow almost $3.7 million from the state’s revolving loan fund to provide new air handling equipment and to replace outside doors and siding at various schools.

Gartley emphasized the air handling equipment when he spoke with China select board members. In a follow-up email, he said that updating air handling systems has been an ongoing effort since before Covid-19; he believes improvements helped protect students and staff during the last three years. Work to be done with the loan is “consistent with improvements that are recommended as a prevention strategy against the spread of COVID-19,” he wrote.

The ballot question says the state has already approved the loan, if voters do the same. RSU #18 will repay a little more than half (almost $1.9 million) over 10 years, at no interest. The remaining about $1.8 million will be forgiven.

Voters enrolled in a political party will also receive a primary ballot. There are no contests on the Democratic ballot. Local candidates are Storme St. Jude Valle, of Augusta, for state Senator from District #15 and Pamela J. Swift, of Palermo, for state Representative from District #62.

On the Republican primary ballot, Matthew Gary Pouliot, of Augusta, is unopposed for re-election as District #15 state senator. Jennifer V. Tuminaro, of China, and Katrina J. Smith, of Palermo, are rivals for the nomination for the House of Representatives from District #62. The winner will be Swift’s opponent in November. 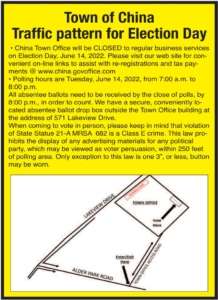 China voting will be in the former portable classroom behind the town office on Lakeview Drive. After a moderator (required by state law) is elected at 7:55 a.m., polls will be open from 7 a.m. to 8 p.m. The town office driveway from Lakeview Drive will be closed; entrance will be from Alder Park Road.

Absentee ballots are available at the town office through Thursday, June 9, without excuse or explanation, and later in special circumstances. The meeting room is set up to allow early voting there; voters who vote elsewhere may return ballots to the locked ballot box outside the office building, or by mail. The deadline for returning absentee ballots is 8 p.m. June 14.

Sample ballots and other information are on the town website, china.govoffice.com, under the Elections tab on the left side of the home page.

Voters who want to know in advance exactly how much they are asked to approve for different departments, boards and committees, projects and purposes should consult the document named “FY 2022-23 Budget Workbook” under the Elections tab.

These articles and others that include town employees’ compensation reflect a 4.5 percent pay increase. Select board members debated raises ranging from 3 percent to 6 percent and by a 3-2 vote recommended 4.5 percent. Members Jeanne Marquis, Janet Preston and board chairman Ronald Breton voted for 4.5 percent increases; Blane Casey and Wayne Chadwick were opposed, favoring 3 percent.

Other large appropriations appear in:

The preceding five articles are recommended with no negative votes from select board or budget committee members. Some members abstained on some recommendations, usually to avoid any appearance of conflict of interest.

Art. 15 asks voters to approve using $265,000 from China’s Tax Increment Financing (TIF) money for 10 projects. They are listed on page 37 of the Second Amended TIF plan, with information on each numbered project on preceding pages. The plan is on the town website under the Tax Increment Financing Committee, which is under Officials, Board & Committees.

The largest proposed uses of TIF money include $65,000 for environmental improvements, primarily by the China Region Lakes Alliance and China Lake Association, and $50,000 for maintenance and improvement of trails, mainly by the Four Seasons Club.

Recommended uses of ARPA funds include, in Articles 30 through 35:

Voters are asked to approve several authorizations for the select board, including authority to sell tax-acquired property (Art. 22); authority to apply for, accept and spend grants (Art. 23); authority to negotiate and approve contracts of up to five years for things like auditing, buying or leasing equipment and roadside mowing (Art. 25); and authority to buy “municipal vehicles, machinery and equipment” (Art. 28).

A specific request in Art. 27 is for approval to sell the no-longer needed police vehicle.

The last three warrant articles are non-monetary. Art. 36 asks voters to repeal a 1998 School Budget Ordinance, which Town Manager Rebecca Hapgood said was made obsolete by membership in RSU #18.

Art. 38 asks voters to approve China’s updated comprehensive plan. A copy is on the website under the Elections tab, and the town office has a paper copy for review.

Art. 37, asking if voters want to enact a Large Scale Solar Facilities Moratorium Ordinance, generated debate among select board members. They ended up recommending that voters reject the ordinance by a vote of two supporters to three opponents.

The argument in favor of the ordinance was that planning board members need time to finish writing and submit to voters (presumably in November) their proposed Solar Energy Systems Ordinance that would regulate future large-scale solar development in town.

The opposing argument was that the moratorium would prevent China landowners from taking advantage of offers to lease or buy their properties for solar development as long as it was in effect.

If voters approve the moratorium, it would last no longer than 180 days, unless the select board extended it.

The moratorium ordinance, too, is under the Elections tab on the town website.