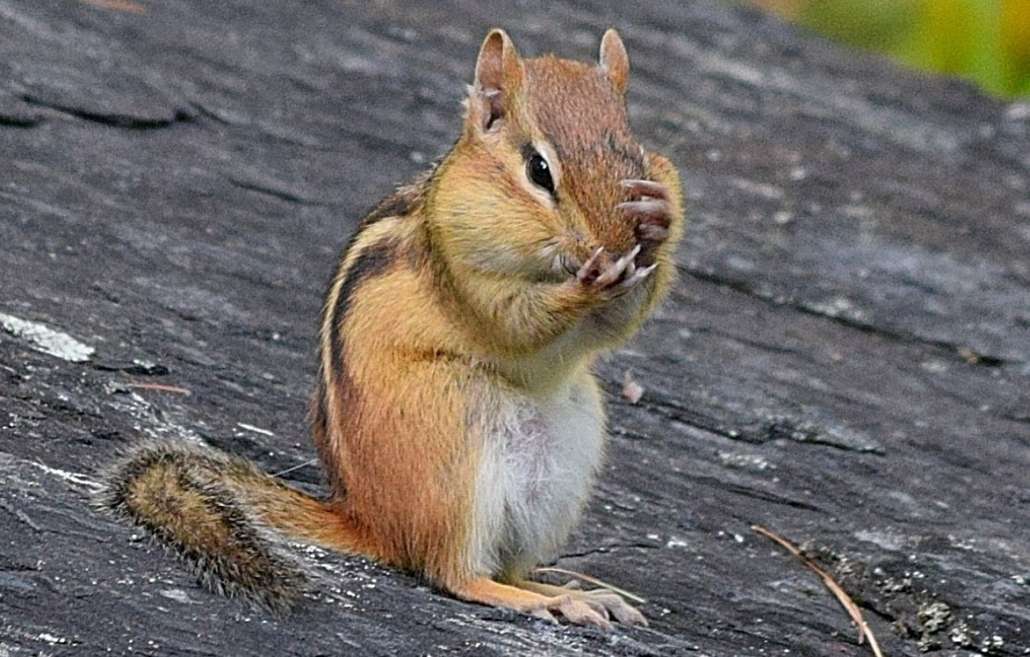 As I sat on our back deck the other day, watching one of “my” chippies fill his cheeks with peanuts, it dawned on me that I had only seen one or two chipmunks at Duck Pond Wildlife Center since I started writing this column about three years ago. Don confirmed they’ve had a few over the years, but more often deal with squirrels that have been injured by predators or cars or dislodged from their nests, usually needing bottle feeding until they transition to a diet of sunflower seeds, nuts, and fruit.

I went through some of Carleen Cote’s earlier Critter Chatter columns and found one from August 2009 entitled, The Charming Chipmunk, in which she wrote they had cared for very few chipmunks over their then 45 years of rehab. She noted that “because they are born underground, they are rarely found at an age when they are dependent on humans for care.”

The name “chipmunk” comes from an Abenaki word meaning “one who descends trees headlong.” First described in a 1743 book, it was later classified as Sciurus striatus, or “striped squirrel” in Latin. A small member of the squirrel family, it has reddish brown fur with a single stripe down the middle of its back and a white stripe between two black stripes down each side of its body. They are 8-10 inches long, including the tail, and weigh 2 – 5 ounces.

Interestingly, the Eastern has two fewer teeth than other chipmunks and four toes each on the front legs, five on the hind legs. It typically lives in mature woodland areas in the eastern U.S. and southern Canada, preferring rocky areas, brush or log piles, and shrubs to provide cover; they are also found around suburban and rural homes. While they do climb trees, most of their time is spent foraging on the ground, being most active during the early morning and late afternoon.

Chipmunks build underground nests with extensive tunnel systems, often with several entrances. They line their burrows with leaves, rocks, sticks, and other material, making the burrows hard to see. They live a solitary life, except during mating season and the six to eight weeks the young spend with their mother. Females usually produce one or two litters of three to five babies; breeding seasons are February to April and again in June to August. During the winter, chipmunks may enter long periods of hibernation, but wake up to eat stored food; sometimes they can be seen out of their burrow during mild winter weather. Their diet consists primarily of nuts, berries, seeds, and mushrooms; I was surprised to learn they occasionally eat insects, salamanders, young birds, and bird eggs. They hoard food for the winter by carrying it in special cheek pouches.

Chipmunks are considered valuable forest inhabitants as they move seeds around resulting in tree and plant regeneration and are an important food source for birds and other mammals. Predators include hawks, owls, foxes, coyotes, raccoons, snakes, weasels, bobcats, lynx, and domestic cats and dogs. They usually live three or more years in the wild, but in captivity may live as long as eight years. Although they don’t cause serious agricultural damage, they can be a nuisance where they eat flower bulbs, fruits, seeds, and seedlings. They may cause structural damage by digging under patios, stairs, walls, or foundations.

In my research, I found it interesting that Eastern chipmunks are known to be a host for the parasitic larvae of botflies. A couple summers ago, my husband and I had a fairly tame chipmunk at camp that had a furless, open sore on its cheek which likely was the result of a botfly rather than a tussle injury.

On a happier note (pun intended), I also learned chipmunks have about five vocal sounds: chips, chucks, trills, whistles or squeals, and chatter. Its trill has been measured at a rate of 130 vibrations per minute!

Don continues to limit admissions and long-term residents by transferring many rescued critters to other rehabbers who have graciously provided assistance in their care. Please check these websites to see if there is a rehabber closer to you to help keep critter care at Duck Pond more manageable: https://www.mainevetmed.org/wildlife-rehabilitation or https://www.maine.gov/ifw/fish-wildlife/wildlife/living-with-wildlife/orphaned-injured-wildlife/index.html –

Donald Cote operates Duck Pond Wildlife Care Center on Rte. 3 in Vassalboro. It is a nonprofit state permitted rehab facility supported by his own resources & outside donations. Mailing address: 1787 North Belfast Ave., Vassalboro ME 04989 TEL: (207) 445-4326. PLEASE NOTE THE PRIOR wildlifecarecenter EMAIL ADDRESS IS NOT BEING MONITORED AT THIS TIME.