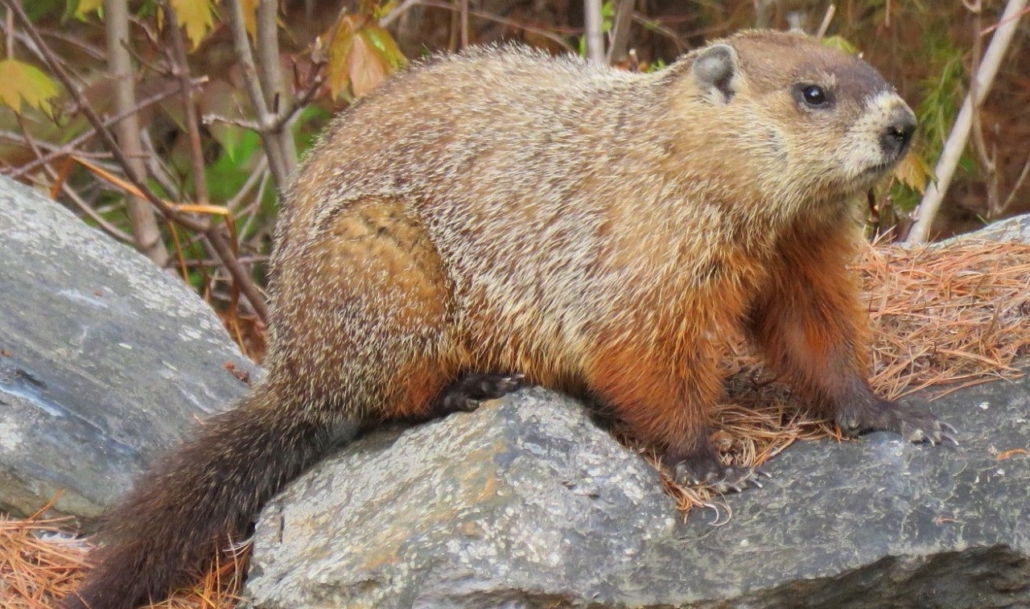 After reading Roland Hallee’s recent column (The Town Line, Scores and Outdoors, February 3, 2022) about his groundhog buddy, Woodrow Charles, and his prediction of six more weeks of winter, I wondered if the Cotes have had many groundhog visitors over the years. I found an article Carleen wrote in 1997, so I thought I’d share some of it:

“As their name implies, woodchucks were originally forest dwellers. With the clearing of the land, woodchucks left the forest to take advantage of the abundant food found in fields and meadows.

“The woodchuck, a member of the squirrel family, appears not to be territorial and, at times, may choose to live in close proximity to other ‘chucks. They are expert diggers and may dig a five-foot tunnel in a day. Requirements for their burrows (there may be several, not all connected), which they continually alter and rework, are that they be on slopes of at least 30 degrees, have good drainage and be close to food and water. From one to eleven entrances (three on average) open into a burrow.

“Woodchucks are true hibernators. In July, they start building a layer of fat which can become a half inch thick. By mid-October, they’ve gone into their winter burrow, which is in a more protected area than their summer burrow. They curl up in a ball, their body temperature drops to between 38-57 degrees F, and breathing occurs about once every six minutes. They start coming out of this state between January and March.

“Mating occurs sometime in March, after they emerge from their burrows. Occasionally a male will remain with his mate, but they usually have no role in rearing the young. A litter may consist of 2-9 young; the female brings them greens, as well as nurses them. At about four weeks of age, they may appear at the burrow entrance. At 6 – 7 weeks, they start straying, but remain near the entrance, scurrying inside at any hint of danger. The female finally evicts them from the premises sometime in July.

“Woodchucks are usually active in early morning and late afternoon. They often lie on top of their burrow or near its entrance to sun themselves. Most literature states woodchucks are strict vegetarians; from our experience at the Duck Pond Rehab Center, we’ve found this to be true, although they have dined on canned dog food and even baby birds. 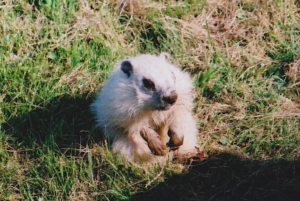 “We have cared for several ‘chucks. Everyone has a different personality. Some would allow us to handle them; others were totally hostile, snapping and chattering their teeth to signal their displeasure at being approached. In 1995, we cared for a ‘chuck we named “Charlie” who was very friendly and really enjoyed her association with humans! She was so well behaved she was allowed to roam inside the house. One day, however, when I left for a period of time, she was left alone in the house. BIG mistake! She went totally bonkers. When I arrived home, I discovered just how panicked she had become, knocking over and breaking any object she could reach, including china cups. She was subsequently released in the duck pen where she would come to the fence every day to get her treat. Eventually she stopped coming and we assumed she had “jumped” the fence.

“The next spring, on one of Donald’s walks around the pond, he suddenly heard a grunting sound behind him. There was Charlie! She had spent the winter in a burrow in the duck pen. She began her daily trips to the fence, remembering that seeing a human meant receiving a treat. Some days she would appear several times, begging for the treat. One day, she did not appear and we assumed a mate had taken on more of a priority than a treat.”

I searched online to confirm that groundhogs and woodchucks are the same critter; they’re also called whistle pigs (because of the alert whistle they make when alarmed), earth pigs, and grass rats! The name “woodchuck” was apparently created by English settlers from “wuchak” – a Native American word for them. In addition to squirrels, they’re also related to prairie dogs and are sometimes mistaken for beavers or muskrats. Groundhogs, however, make their homes in burrows in the ground instead of near water. They are 20-27 inches long, weigh between 5 and 15 pounds, have brown fur and small, fluffy tails. They eat about a third of their weight in food daily, mostly plants, flowers, nuts, fruits and sometimes insects and grubs. Their lifespan in the wild is typically three to six years, but in captivity is usually triple that!

Those tunnels Carleen wrote about? They can extend up to 60 feet, with multiple levels. I found it interesting that the lowering of their body temperature during hibernation fluctuates. After an all-time low for a week or so, their temperature will rise for a few days before dropping again. Groundhogs are apparently known for their cleanliness and resistance to germs and diseases that infect and kill other wild animals. Cheers to a healthy life!

The continued assistance from other rehabbers is greatly appreciated as Don has cut back on admissions and long-term residents. Please check these websites to see if there is a rehabber closer to you to help make critter care at Duck Pond more manageable: https://www.mainevetmed.org/wildlife-rehabilitation or https://www.maine.gov/ifw/fish-wildlife/wildlife/living-with-wildlife/orphaned-injured-wildlife/rehabilitation.html.

Donald Cote operates Duck Pond Wildlife Care Center on Rte. 3 in Vassalboro. It is a non-profit state permitted rehab facility supported by his own resources & outside donations. Mailing address: 1787 North Belfast Ave., Vassalboro ME 04989 TEL: (207) 445-4326. PLEASE NOTE THE PRIOR wildlifecarecenter EMAIL ADDRESS IS NOT BEING MONITORED AT THIS TIME.