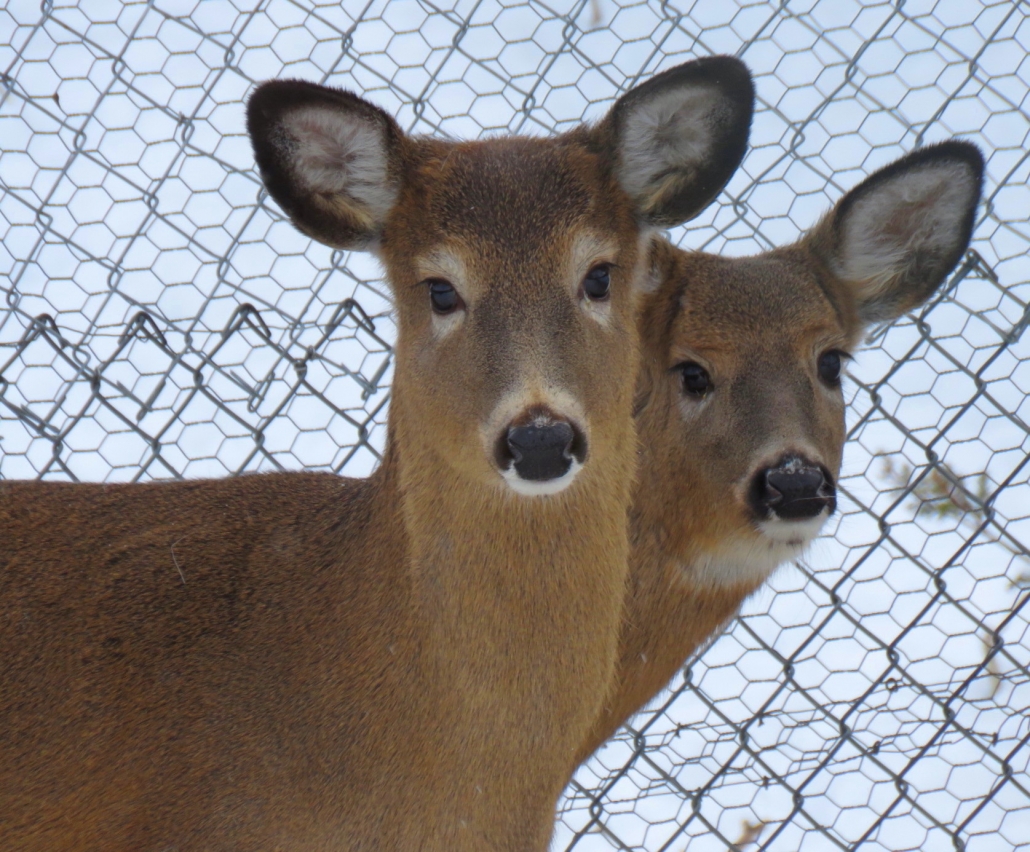 I think most of us would agree that, so far, Central Maine has experienced a fairly mild winter, especially in snow accumulation. Donald Cote, of the Wildlife Care Center, in Vassalboro, has had to plow access to the wildlife enclosures only two or three times; snow-blowing and shoveling have been minimal. Icy paths, however, still need sanding, and we must attend to frozen water tubs and mucking out pens.

When I stopped in at 10:30 a.m. on a Wednesday in mid-January, Don had been up since a chilly 7 a.m. and was just coming in after inspecting a section of deer fencing which needed repair. He readily admits he’s had to be careful due to limited range of motion in one shoulder, but has a number of folks he can call on to help with physically demanding projects. In addition to monitoring fence and building maintenance, a typical morning includes preparing food and formulas for breakfast feedings, changing hay and towel beddings, dispensing medications, and changing dressings. Later in the day, attention is given to washing and disinfecting food dishes, as well as doing several loads of laundry for soiled blankets and towels. Any time during the day he may need to respond to rescue calls, transport injured wildlife to the vet, or pick up food donations from Hanna­ford, Wal-Mart, animal shelters, etc. He does try to leave Wednesdays open for his own personal business and appointments, but being on-call 24/7 requires patience, understanding, and flexibility in the schedule. Round Two starts again as the dinner hour nears!

In addition to the ducks and geese, residents in January included three young opossums, two young porcupines, one skunk, two chipmunks, three coyotes, and about a dozen each of racoons, foxes, and deer, all of which require tending at least twice a day. Many are carry-overs from last fall because they were too young or not well enough for October release; the remainder are fall and winter rescues from vehicle hits, natural injuries and home “invasion” critters seeking food and shelter from the harsh elements.

January is also the time for submitting annual state and federal reports, with license renewal applications due every two and five years, respectively. Don doesn’t have a computer, but one of the center’s volunteers assists him with report preparation, copying, etc. Volunteerism takes many forms, but more on that in another column.

While the volume of wildlife rehab work slows down during the winter, there is never a day off at the Wildlife Care Center. Wildlife rehabilitation takes a special kind of person, one who is dedicated, compassionate and selflessly committed.

Donald Cote operates the Duck Pond Wildlife Care Center on Rte. 3 in Vassalboro. It is a non-profit federal and state permitted rehab facility which is supported by his own resources and outside donations. Mailing address: 1787 North Belfast Ave., Vassalboro ME 04989 TEL: (207) 445-4326 EMAIL: wildlifecarecenter@gmail.com.