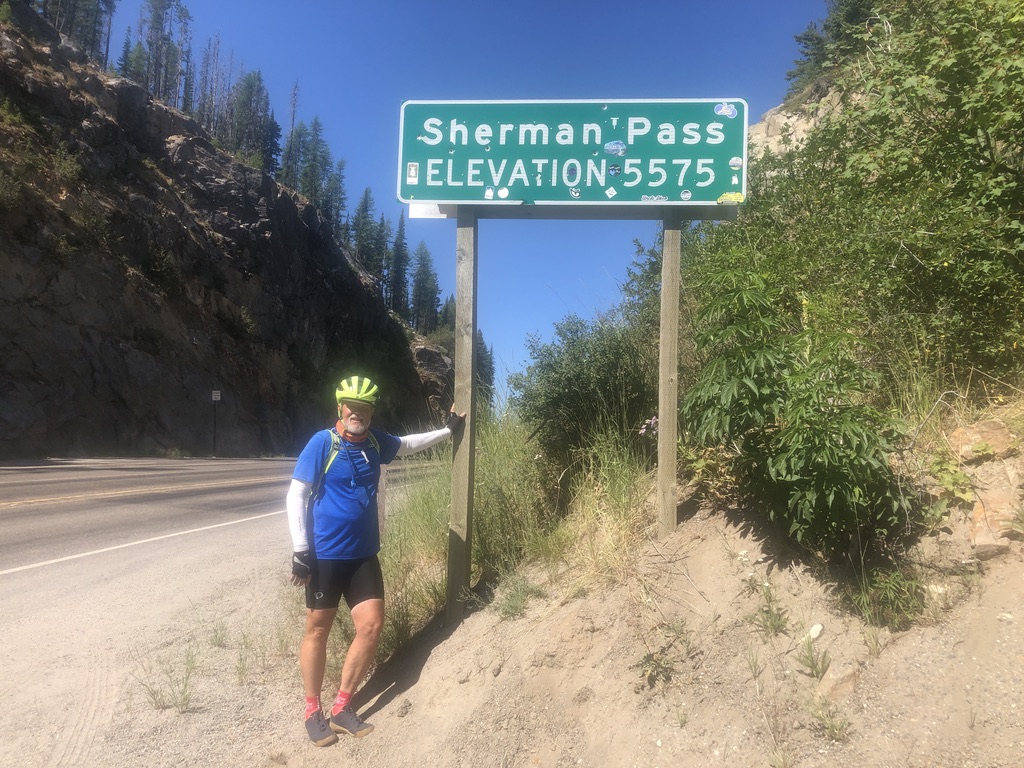 There was something about riding into Montana that gave me a sense that we were really making progress. Montana was our 13th state and I had completed over 2,500 miles on the bike. My bike was holding up well and I was feeling good – strong with no aches. The idea of finally getting into Montana, “Big Sky Country,” as it’s affectionately referred to, just sounded uplifting.

Allane and I left Medora, North Dakota, on a clear, hot day with a sense of accomplishment. The heat was increasing and I was now in the habit of getting up at around 4 a.m. and heading out on my ride. I had to get in a day’s ride before the afternoon heat set in. There weren’t many roads between Medora and Glendive, Montana. I rode the flat prairie with views of the Black Hills along either side of the road. Towns and settlements were fewer and farther between. I headed into Beach, North Dakota, a heck of a name for a town in the middle of the prairie. After a nice lunch with Allane in Beach I was about to embark on a new adventure, riding the Interstate. 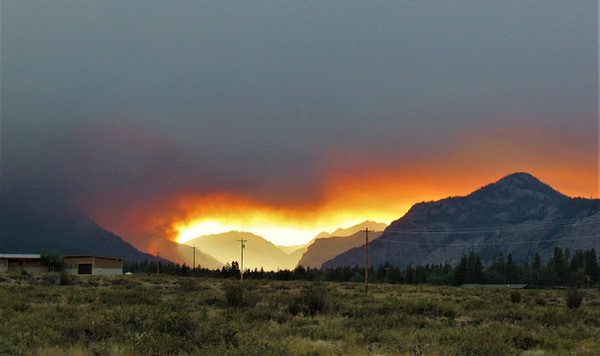 A view of the Rocky Mountains at sunrise.

The only road running East-West was I-90 and I was going to try my luck riding along side streams of cars, RV’s, and semi trucks with tandem trailers all going 80 mph! Thank goodness the shoulder was clean and wide. After roughly 40 miles I was able to get off the highway in Glendive. I came to learn that in the West it is not at all uncommon for cyclist to ride on the interstate. It was new for me, and I was more than a little cautious. I hugged the far right side of the shoulder, put my head down and made some of the best speeds I would attain over the whole trip.

I carried on with the early mornings just to avoid problems with heat and it worked for me. There generally aren’t a lot of vehicles on the road at 4 a.m. and the views of sunrise and animals out for an early forage were stunning. From a distance the prairie can seem dull, empty and lifeless. I never appreciated the beauty of this type of terrain until I was able to spend hour after hour riding at 12 mph through it. I came to find the Montana prairie full of life, color and activity once I experienced it up close.

I rode through very small towns in Eastern Montana. I rode through the towns of Circle, Jordan, Winnett, and Stanford making our way Westward. We were met with cautionary news of grizzly bear sitings almost as soon as we entered Montana, but when we got to Stanford a nice gentleman in a diner showed us an article in the local newspaper about a cyclist who had been dragged from her tent and killed by a grizzly. This happened not far from where we were planning to ride. The warnings were all of sudden much more real. That evening, in our motel, Allane let me know that our days of tenting had come to a halt.

Probably the toughest day of riding on the trip came between Jordan and Winnett. The night before the ride I noticed that on the map it stated “No services for 74 miles.” I assumed it meant there were no gas stations, hotels or restaurants. But, in fact, it meant there was no sign of human life in this stretch between Jordan and Winnett. I left at approximately 4:30 a.m. and started out with a stiff headwind. If there’s anything that will demoralize a cyclist it’s riding into a headwind. Climbing hills or riding in the rain can be challenging, but fighting a headwind seems like you’re working constantly, making little progress and there’s no end in sight. On this day, Day 57 on the trip, I fought against a 20-27 mph headwind for 76 miles over eight hours. I averaged a whopping 9.5 mph and, when I finally made it to our stop, I was exhausted.

Thank God Allane was at the end. She had our accommodations and an iced coffee for me to recover and relax with.

I left Winnett without much regret. It was a desolate town with empty, dilapidated buildings and many abandoned houses. It really was a sad place. However, within 20 miles we came upon another tiny town called Grass Range. It was the polar opposite of Winnett, with nice houses, flower pots and green lawns. What a contrast! Our pancake at breakfast got our vote for the best on the trip.

The wind was now much more a factor than it had been on the trip thus far. The prevailing wind direction for the United States is from west to east. I knew this was the case before I left on my ride, but had not really appreciated just how much wind can impact a cyclist’s journey. I thought my biggest challenge would be the hills and mountains I would have to scale. I was mistaken.

I rode through the prairies of Montana for over a week getting to know this unique and, I would argue, mostly misunderstood, part of our country. We enjoyed the hospitality of very warm and generous people. In Great Falls, Montana, we met Brianne, a young woman who was so taken with the idea that someone would ride their bike across the country that she gave us a tour of “her” city and called her previous boss to get us a personal tour of the CM Russell Museum. CM Russell, a renowned artist whose works depicting ranch and cowboy life in Montana, sit in the Oval Office, the National Museum of Art and many other places. Great Falls was a memorable stop made all the more special because of the people.

We were both getting excited because we were getting close to Glacier National Park and the famed Rocky Mountains of Montana. The anticipation of the scenery and the postcard worthy views was real. I rode from Cut Bank, a small prairie town bordering the foothills of the Rockies. I saw the Rocky Mountain range from almost 50 miles away and it was amazing. Big, tall and vast, the range ran from north to south covering the span of my view. It would be my guiding feature for the next day. 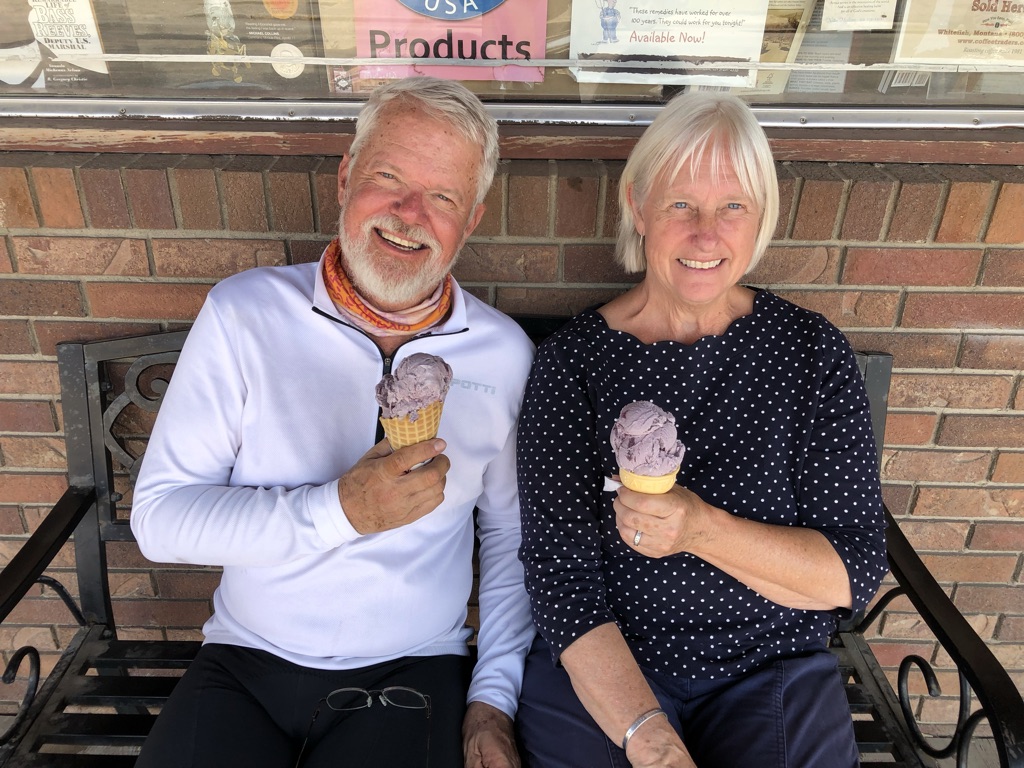 We entered the Rockies at East Glacier Village, on the southern border of the national park. I anticipated hard riding, but after fighting the wind on the prairie, the mountains seemed pretty easy. I saw wildlife and enjoyed breathtaking views. I was frustrated that I couldn’t capture it all in photos. Every time I stopped to pull out my camera to take a photo, the scene changed or the animals ran away.

We loved the new taste of huckleberry in everything from ice cream, to tea, to syrup. There were more people and we really appreciated the new sense of community that seemed to exist amongst travelers, hikers, and cyclists.

I scaled Mariah’s Pass outside of Summit, Montana, with an elevation of 5,216 feet, crossed the Continental Divide, and glided down into Kalispell, a lovely city nestled in the mountains and atop Flathead Lake. It seemed everywhere we looked we would catch our breath and say, “Wow!” The Rocky Mountain Range is a uniquely special place.

I finally had come through Montana just beyond the town of Libby after over 700 miles of cycling! I thought New York was long. Montana is nearly 1.5 times as long as New York!

From the Rockies I rode on through that part of Idaho that sticks up between Montana and Washington. It was mountainous and wild and very much worth the ride. We spent one day in Idaho, stopping in Sandpoint, a lakeside city near the border between Idaho and Washington. Idaho was our 14th state!

I entered Washington State on our 70th day on the road. Our goal of crossing the United States was getting closer and we knew it. We had some spectacular cycling ahead of us in the Northern Cascades, so we weren’t necessarily looking to hurry it up.

Our first real taste of the Northern Cascade Mountains was to scale Sherman Pass, the highest paved mountain pass in Washington at 5,575 feet. On this climb of Sherman Pass I rode 23 miles up to the peak and then glided down while enjoying breathtaking views.

We were looking forward to visiting with an old Army buddy, Hank Cramer, from Winthrop, and had his lovely town that sits nestled in the Cascade range in our sights. But forest fires were beginning to rage and people who lived in these parts were either fighting the fires, protecting their homes or getting ready to evacuate. I had never seen a forest fire up close and wasn’t eager to do so, but we saw several on this ride. It’s both overwhelming and scary. I was not close to worrying about my safety, but could see the forest engulfed in smoke. It was quite a sight.

Our visit with Hank in Winthrop was not to be. Instead, we met in Omak, Washington, about 40 miles southwest from Winthrop and off of my original route. We met for a nice dinner, but we were a safe distance from the fires that had closed the only road heading west out of Winthrop. My plan of riding the Northern Cascade Range from Idaho to the coast would have to be abandoned.

I re-worked my route traveling south along the Columbia River to the Southern Range of the Cascade Mountains. Although not my original route, it turned out to be an equally spectacular ride through mountain passes and scenic river valleys. 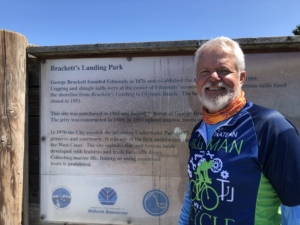 Steve standing next to the Brackett’s Landing sign, the final destination.

At this point, we needed to select our final route to the coast. Looking over the map for a reasonably safe and appropriate coastline to end this adventure, Allane came across a small beach in Edmonds, Washington. Brackett’s Landing sat on the northern side of the Edmonds Ferry that connected Bainbridge Island to the mainland. It seemed that fate determined Brackett’s Landing to be our destination. Allane’s maiden name is Brackett and what better place to end this epic journey than at a place with this name?

As it turned out, Edmonds was founded by George Brackett and, after some serious research, Allane determined that she is distantly related to George, whose father was born in Yarmouth, Maine.

People have asked what I liked best, or what was the hardest part, or what was most memorable about this journey. I have a hard time narrowing my experiences down to single days, or places. In fact, what I liked best about this epic journey was that I saw more, felt more and appreciated more about this country than I have ever before. I know now that true appreciation of anything can best be accomplished at a slow and deliberate pace. And finally, reaching a destination is rarely the most gratifying part of any endeavor, it’s the process of getting there that is most satisfying and most lasting. 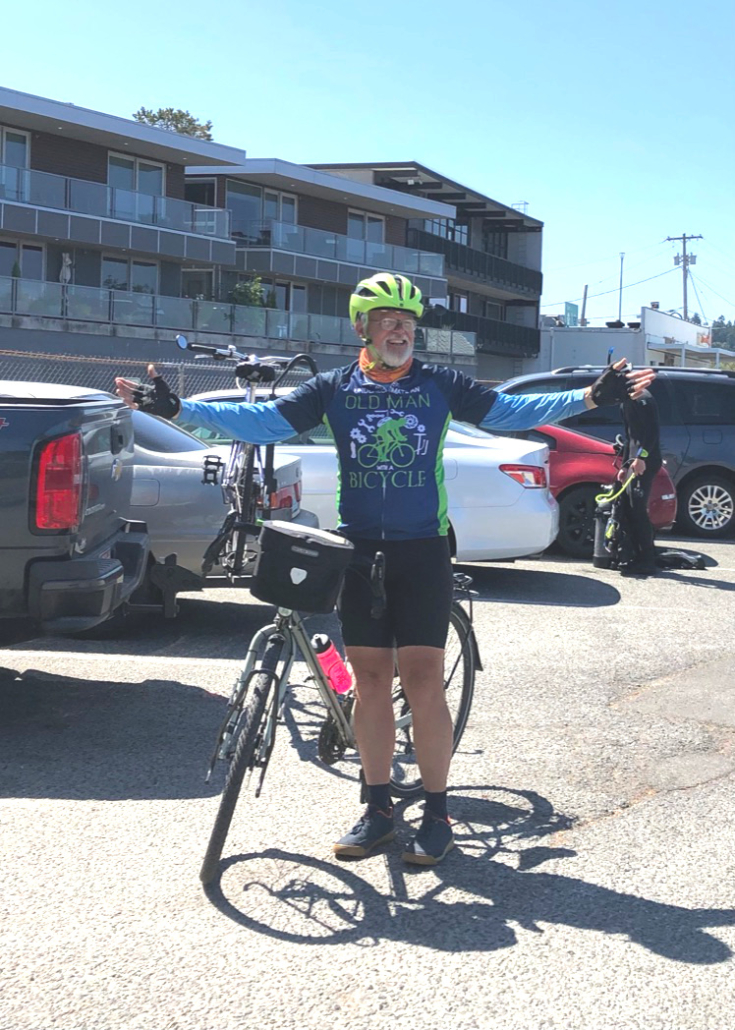