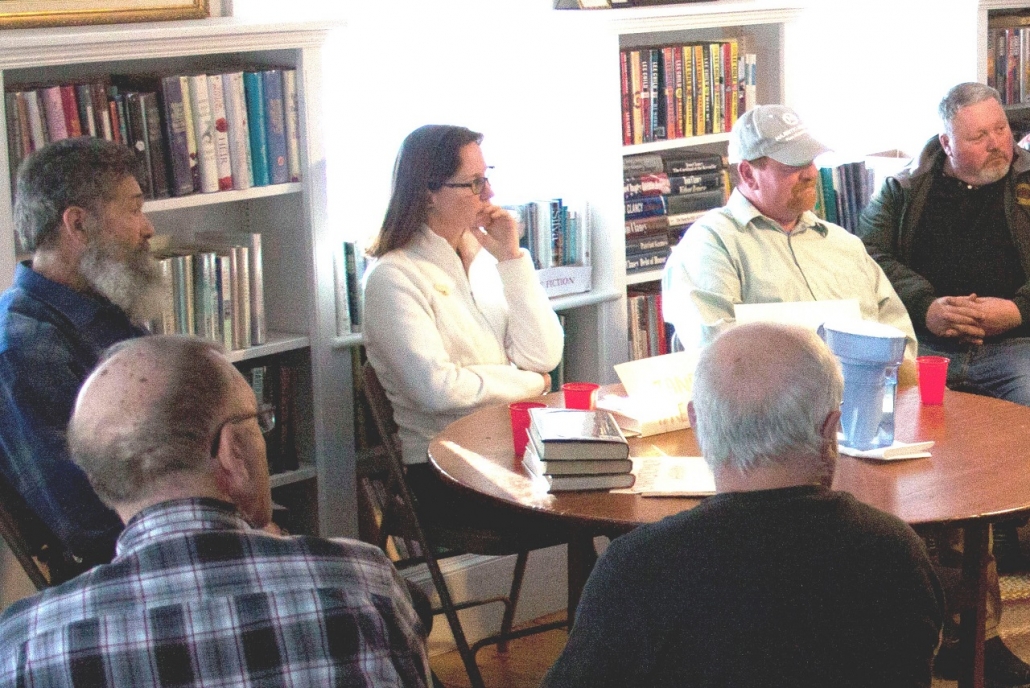 All three candidates in China’s March 3 special election for selectman, and an audience of more than three dozen people, turned out for the Feb. 23 candidates’ forum at the Albert Church Brown Memorial Library in China Village.

The candidates, in alphabetical order, are:

All three candidates plan to do their best to serve townspeople, and all three realize that the Selectboard cannot please all the people all the time. Hahn sees becoming a selectman as an extension of his committee service. Preston promised “thoughtful, informed decisions,” called for compromise and more than once declined to commit herself on an issue until she had more facts. Rhoades said he likes politics, likes people and likes a fight.

A major topic, referred to more than once, was whether China’s tax rate is too high and if it is, what to do about it.

Rhoades’ preferred solution is to expand the tax base by encouraging more construction in town. To do so he recommends loosening China’s land use and construction standards where they are stricter than state requirements.

Asked later if he was concerned about the tax increase in the proposed 2020-21 budget, he said no. “We’ve been behind,” and if residents want services they have to pay taxes.

Preston thinks taxes should be considered in relation to the services provided – higher taxes should provide more or better town services. She lives in a lakefront house and therefore pays comparatively high property taxes, but she does not think her taxes are excessive, especially because, in her opinion, China has an excellent school system.

Law enforcement is a service that residents will be asked to vote on expanding at the April 4 town business meeting. The warrant includes the annual budget for part-time local police coverage to supplement county and state coverage, and two additional proposals: hiring one full-time policeman in addition to existing coverage, or contracting with the Kennebec County Sheriff’s Department.

Rhoades thinks China does not need a full-time policeman. Hahn leaned toward the same opinion but wanted more information; and Preston declined to commit herself without more information.

A question to Hahn about the China for a Lifetime Committee revealed a difference of opinion among the candidates. Hahn said nothing is likely to happen for years, and town resources would be welcome if voters so decide. Preston remembered prior discussions of building a retirement community, an idea she supports. Rhoades said making life safe and convenient for older people is an individual responsibility, to be entrusted to family members and neighbors, not to government.

Rhoades also disagrees over whether the town should provide public lake access. He says no; the other two say yes.

Several audience members wanted to argue about the multi-month dispute between town officials – specifically, the town manager and selectmen – and volunteer fire departments. No candidate was asked specifically which side he or she was on, and none volunteered the information.

This topic will also be on the April 4 meeting warrant. Selectmen have deleted $40,000 that was previously considered money for stipends – or recruitment and retention, as the firefighters call the account – from the fire and rescue appropriation. They have added $40,000 to the community support organizations’ budget for the fire departments and rescue to use as they please, subject to reporting requirements the town treasurer says are required by law.

Both those articles are written so that voters cannot increase the total amount. None of the three candidates approved of this “capping” expenditure articles.

The Feb. 23 discussion began and ended with the topic of communication, specifically how selectmen and other town officials can keep residents better informed of planned actions and collect input. To inform everyone of every significant action is impossible, the candidates agreed. They and audience members recommended the Town of China website; the town Facebook page that Hahn said the China for a Lifetime Committee started; watching selectmen’s meetings on line; The Town Line newspaper; the Tuesday school notices, which Preston said most parents read; notices at the transfer station (“We do that,” Rhoades interjected) and the post offices; and more frequent direct mailings, Hahn’s suggestion that others pointed out would be expensive.

China’s local voting March 3 will be in the former portable classroom behind the town office, with polls open from 7 a.m. to 8 p.m. As during last November’s election, the driveway from Lakeview Drive will be blocked; access will be from Alder Park Road.

Whichever of the three candidates is elected will serve only until November 2020, finishing Jeffrey LaVerdiere’s unexpired term. All three indicated they are likely to run again in November, whatever the outcome March 3.