From time to time, it happens. You see something unusual, don’t know what it is, so you go to your research material to find the answer. You use multiple sources, do your homework, then, when you think you have found the answer, it ends up being wrong.

Well, it happened again last weekend for me. While working in my garden at camp, I noticed this unusual looking dragonfly. It wasn’t your run-of-the-mill, old brown ugly dragonfly. It was extremely colorful and just seemed out of place. 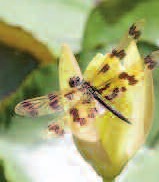 My research pointed to it being a Graphic Flutterer, rhyothemis graphiptera, The photo looked remarkably similar to the photo I had taken, but there was one thing that didn’t add up. The Graphic Flutterer can only be found in Australia, the Moluccas, New Guinea and New Caledonia. That’s half way around the world from here.

So, like I have done many times before, I turned to my contact, a wildlife biologist at the Maine Department of Inland Fisheries and Wildlife, emailed the photo to him, and he responded in short order.

“This is a Halloween Pennant,” (no, not a little flag you would wave on October 31), “Celithemis eponina. This is a native dragonfly in Maine, an uncommon, but not rare, species that breeds in slow streams, ponds, and lakes with abundant aquatic vegetation.”

Well, it sure fits. If you have been to Webber Pond, in Vassalboro, in recent years you will see that the lake is abundant with aquatic vegetation.

The Halloween pennant can be found across the eastern United States, ranging from the east coast to the states just east of the Rocky Mountains. They can also be found on some Caribbean islands and in Ontario province, in Canada. Seen mostly during June and July during the summer, they are actually active year round.

The Halloween pennant gets its name from its orange-colored wings, which have dark brown bands. They are often found on tips of vegetation near the edges of waterways. Mine was just hanging around on a Tiki torch near my garden.

It is a medium-sized dragonfly but also considered large for its species. They can range from 1-1/2 to 1-3/4 inches in length. 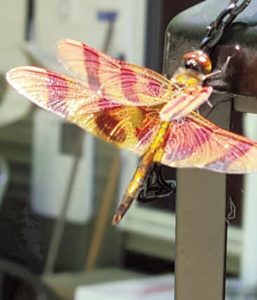 The adults fly around above freshwater habitat and the surrounding vegetation, and feed on smaller insects they capture in flight. They are considered very strong flyers, and can fly during rain and strong winds.

And, listen to this, they have some positive impact: They help control the mosquito population and have no negative effect on humans. I can only hope I see more of them, considering the healthy mosquito population we have at camp. We feed them well.

They are also secure in numbers and currently have no conservation concerns, according to the International Union for Conservation of Nature.

In case you’re interested, dragonflies have been in existence since the Permian period (299 – 251 million years ago).

In the end, I was not too far off when I identified it as a Graphic Flutterer. According to the Animal Diversity Web, at the University of Michigan Museum of Zoology, the male Halloween Pennant closely resembles the Graphic Flutterer (take a look at the accompanying photos).