During one of the final weekends of camp, my wife and I, one day, were sitting on the deck, enjoying the unseasonably warm weather and watched nature as we made our plans for closing up camp for the summer. It was a warm, sunny day with a slight breeze coming out of the northwest. During that time I was able to watch this one particular chipmunk, which I would have to describe as resilient and determined.

Right in front of our storage sheds, he had dug one of his many entry holes. As we later went about our business of closing things up, the chipmunk’s hole kept getting filled in. Over the next few days, we would wake up in the morning and the hole had been re-opened.

On the fourth day I noticed his hole had not been re-opened from the day before. 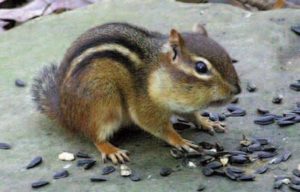 Suddenly, out of the brush he came, and right there in front of us, began to dig as if we were not there. I know he knew we were there, but I couldn’t figure out whether he wanted to show us that we were not going to discourage him, or maybe he was just being plain defiant.

They are cute little buggers and very industrious. We watch them at our camp all the time, and they become braver as the summer turns to fall.

The common name of the chipmunk comes from the native Ottawan word jidmoonh, meaning “red squirrel.” The earliest form of “chipmunk” appeared in the Oxford Dictionary of 1842, although it appears in several books from the 1820s. They are also referred to as striped squirrels, chippers, munks and timber tigers.

They are omnivorous, primarily feeding on nuts and other fruits, buds, grass, shoots and many other forms of plant matter, as well as fungi, insects and other arthropods, small frogs, worms and bird eggs. Oh, and did I mention bird seed.

They forage basically on the ground but will climb trees for hazelnuts and acorns. They begin to stockpile food in early fall. They stash their food in their burrows and remain underground until spring, unlike some other species which make multiple small caches of food, such as the gray squirrel.

As small as they are, they fulfill several important functions in forest ecosystems. Their activities harvesting and hoarding tree seeds play a crucial role in seedling establishment. They consume many different kinds of fungi, including those involved with trees, and are an important vehicle in the dispersal of the spores of truffles which have co-evolved with these and other mammals, and thus lost the ability to disperse their spores through the air.

The eastern chipmunk hibernates during the winter.

Chipmunks also play an important role as prey for various predatory mammals and birds, but are also opportunistic predators themselves, particularly in regards to bird eggs and nestlings.

Chipmunks, on average, live about three years, but have been known to live up to nine years in captivity. In captivity, they sleep an average of 15 hours a day. It is thought that mammals which can sleep in hiding, such as rodents and bats, tend to sleep longer than those that must remain on alert.

Well, when we left our little friend on Sunday afternoon, his hole was open and he was seen scurrying around in the leaves, gathering the acorns that were falling from the trees …as if we weren’t even there.