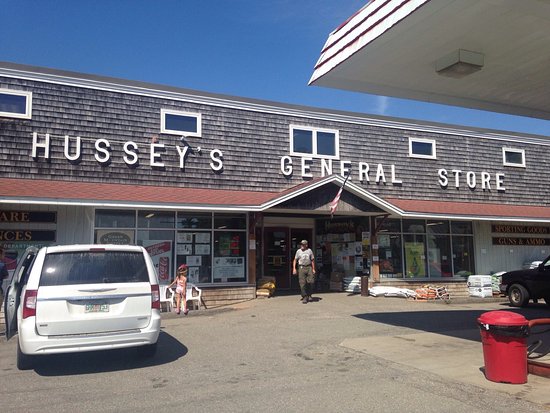 Hussey’s General Store, at 510 Ridge Road (Route 32) just south of the Route 105 intersection, has a website and its own Wikipedia entry, both quoting the store’s slogan, “If we ain’t got it, you don’t need it.” The business has operated for 97 years and is now owned and managed by the third and fourth generations of the Hussey family.

Harland B. Hussey opened the original store in 1923 in a former stable in the northwest angle of the Windsor Corners intersection, Linwood H. Lowden says in good Land & fine Contrey but Poor roads a history of Windsor, Maine (1993). Harland Hussey’s son, Elwin Hussey, recalls that the stable belonged to the Dutton family, who had for many years owned what Lowden calls the Haskell lot, where Hussey’s now stands. Lowden, who did his typical comprehensive research in deeds and other documents on the Haskell lot, writes that Harry Pinkham was running the Dutton store on the Haskell lot when it burned in 1923.

Harland Hussey, his son says, was a cousin of Pinkham’s wife and was running a car dealership half a mile south. He says Harland Hussey sold Stars and Durants (both manufactured in Lansing, Michigan by Durant Motors, Inc., from 1921 to 1931).

When Harland Hussey learned that Pinkham did not plan to rebuild, he bought the whole property, Elwin Hussey says, and opened his store. The stable-become-store building, which is now used as a warehouse, was expanded at least twice, Lowden writes, for the second time in 1947 when Elwin Hussey joined his father in the business.

Elwin and Shirley Hussey had two daughters and one son, whom they named Benjamin Jay. Jay Hussey’s daughter, Kristen (Hussey) Ballantyne, says her grandfather was born in 1923, the same year the store opened. He started working there in his ‘20s, as manager of the electronics and appliances department, and later took over the business.

In 1953 the family built the present store on the southwest corner of the intersection. Ballantyne says her great-grandmother, Harland Hussey’s wife Mildred, took advantage of the expanded space to start the store’s bridal business in 1953 and 1954, and in April 1954 organized a celebration of the new building and the new department.

Jay Hussey and Kristen Ballantyne now co-own the business. Ballantyne says she has worked in the store since childhood; after college, a short career in social work and marriage, she returned to Hussey’s in 2009 and describes herself as co-owner/general manager and overseer of the clothing and bridal departments. Her half-sister, Lindsay French Hannon, has worked in the bridal department for the past 10 years, she adds.

Lowden writes that the first Haskell store was started in 1837, where the north end of Hussey’s store is now, and by 1841 Ambrose Bryant had a second store on the next lot south, under the middle of present-day Hussey’s. Both disappeared in the early 1850s, and the lot was vacant until in September 1874 the Dutton building was moved from South Windsor.

Lowden quotes part of the description of the move from Roger Reeves’ diary (even though, he writes, it had previously been quoted in the Windsor sesquicentennial history). Reeves, who headed the movers, says the building was put onto skids and rollers, and 56 yokes (pairs) of oxen – “the best team that I ever saw together” – were able to move it; but there should have been another 60 oxen, in Reeves’ opinion.

The move took two full days. By the end of the first day, Reeves wrote, “Men worked hard and ate a barrel of crackers and most of a 46-pound cheese with codfish for dessert.” His comment at the end of the second day was, “There has been one heavy hauling without rum!”

Up and down the Kennebec Valley: Windsor REVIEW POTPOURRI – Soprano: Licia Albanese; Poet: Alice Christiana Me...
Scroll to top