A couple of weeks ago, a violent clash broke out between protesters and counter-protesters in Charlottesville, Virginia. The violence occurred at a rally organized by white nationalists, angry at the imminent removal of a memorial for Confederate General Robert E. Lee.

I was home and watching it unfold as it happened. It was chilling to see footage of hundreds of men marching six abreast, torches held high and chanting “Blood and soil!” and “Jews will not replace us!”

Later in the day, reports came in that one of the white nationalists had rammed his car into a crowd of counter-protesters, killing a young woman and injuring many more. The moment was captured on video and played ad nauseum in the news media.

An observant twitter user noted the major difference between racists of the past and those marching in Charlottesville: they no longer bothered with the iconic white robes and conical hoods. Their faces were plain to see. 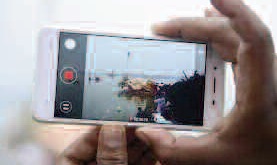 Instead of a few grainy pictures on the front page of the Evening Post, thousands of photos and live video got posted to the internet.

The following day a tweet popped up in my twitter feed. It was an appeal for help in identifying individuals from the photos and video that had been circulating the internet and cable news channels. Full of righteous indignation, I liked and retweeted it.

Most of us have online profiles available for public view with our real names attached to a photo, and often to a place of employment or school, or even to the names of other people we know. On sites like Facebook, LinkedIn or Instagram. Also in less obvious places like school alumni pages and business websites that list employees. Even our Amazon profiles have information about us. We leave our digital fingerprints everywhere.

On Monday, reports continued to pour in. One of the white nationalists had been identified and his employer began receiving complaining calls. He was fired.

Another young man’s family, after he was outed on twitter, publicly disowned him in a letter sent to their local paper – which was then broadcast worldwide on the web. His nephew gave interviews to the press. “Our relatives were calling us in a panic earlier today,” he said, “demanding we delete all Facebook photos that connect us to them.”

This is all for the best, I thought to myself. Racism is wrong. White nationalism is destructive. Surely, the best way of dealing with such views is to shine a light on them.

Within days, the New York Times was reporting on one poor man in Arkansas, who had been misidentified by over-zealous internet sleuths. His inbox quickly filled with messages of vulgarity and hate. Ironically, this was in reaction to similar sentiments displayed in Charlottesville just a few days earlier.

I have always found myself coming down on the side of Benjamin Franklin, who said, “It is better 100 guilty persons should escape [justice] than that one innocent person should suffer.”

It’s a maxim Franklin applied to our criminal justice system, but I think it’s relevant here.

If you attend a neo-Nazi rally and decide not to bring your pointy hood, you risk family and friends seeing your face plastered all over the news.

But let’s not allow the internet’s version of mob mentality to dictate the rules for our society.

There is a reason John Adams insisted “we are a nation of laws, not of men.” There is a reason our Founding Fathers chose to make this nation a constitutional republic instead of one ruled only by the majority.

The internet is a powerful tool, but one better used to facilitate dialogue with others, and not as a weapon to bludgeon them. The internet may be a billion voices, but it can also wear a billion boots. Let’s not trample the innocent in our mad rush to condemn the justifiably horrific.

If you’d like to be my third follower on twitter, you can find me @realEricAustin or email me at ericwaustin@gmail.com.